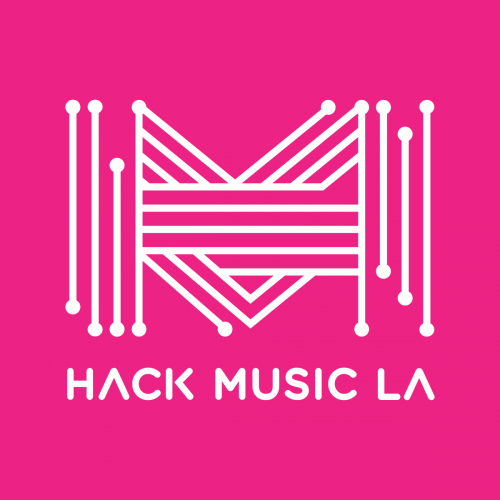 Running Into — and At — Opportunities

Opportunities come from the most unexpected places, and this experience was no exception. I found out about Hack Music LA because I follow the Los Angeles Philharmonic @laphil Instagram page. Of course, the Hack Music concept immediately caught my attention; they were calling for young musicians, engineers, artists, gamemakers, composers, filmmakers, and entrepreneurs to come together and make positive change.

Gustavo Dudamel, LA Phil’s Music and Artistic Director, believes “music is a fundamental human right.” Music is a universal language that helps us understand ourselves and each other better. And currently in the United States and across the world, creating paths to understanding is more important than ever. At Hack Music LA, our 75 participants will be asked to do just that: imagine and create tools or experiences that expand physical or emotional access to music, and in doing so, expand emotional access to others. What innovations can make music of all genres even more alive for more people in the classroom, at work, or on the go? For audiences on stages, in public spaces, or in the virtual world?

As a musician working to build my skills in performance, teaching artistry, innovation, business, and community engagement, this mission absolutely resonated with me. I never stopped to question whether I should send in an application, and it was incredibly exciting when I heard that I was an accepted participant. I packed my bags and found myself on a whirlwind adventure to Los Angeles, from Friday, October 6 through Sunday, October 8.

Expecting the Unexpected Only Goes So Far

“Powered by the LA Phil,” my adventure began with a rooftop Hack Music LA reception at Walt Disney Concert Hall and a ticket to the all-Mozart program with Dudamel conducting – an incredible performance. The following Saturday morning, Hack Music LA truly began, with keynote speakers from Oculus, Kickstarter, LAPhil administration, the Dragon Kim Foundation, and Iovine and Young Academy for Arts, Technology, and the Business of Innovation founder Erica Muhl. 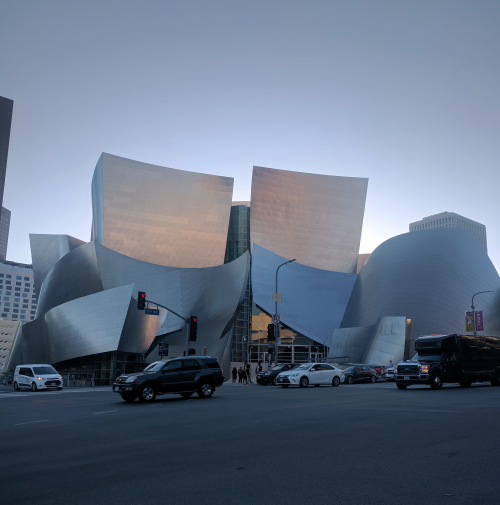 Previously, participants had only been sent a general schedule for Hack Music LA. It was only after opening speakers that we finally learned how everything would work: Everyone had 30 seconds for an idea pitch, teams of 3-4 people were to be formed by participants independently in a free-for-all style, and prototypes were expected to be completed by the judging of ideas on Sunday, October 8.

At the word prototypes I realized – I hadn’t actually known what I was getting myself into. Hack Music LA’s focus was of course, music. However, this was in fact a “hackathon.” Despite expecting the unexpected, I was maybe – definitely – in over my head. 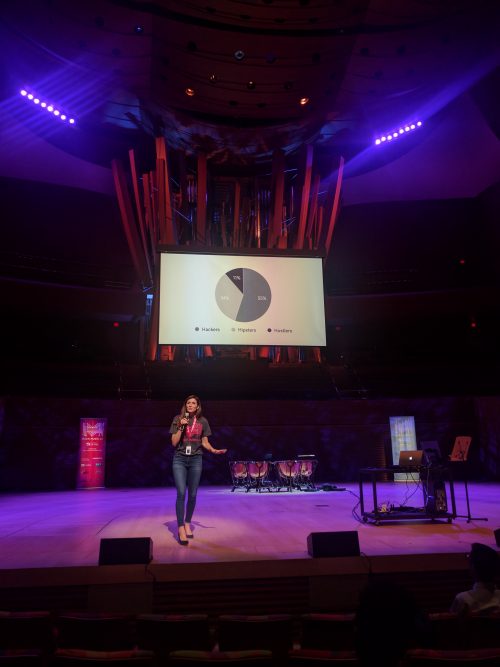 Adapting to a “Hackathon”

According to dictionary.com, a hackathon is “a usually competitive event in which people work in groups on software or hardware projects, with the goal of creating a functioning product by the end of the event.”

If I had to choose an analogy, I would say I was a fish out of water. I imagined humorously that a comparable situation for the participants with a tech background would be expecting them all to create teams and perform as a chamber group in a matter of days at a high-stakes competition.

Fortunately, I ended up with a group that included a programmer who embraced an idea I pitched for a group music composing program. He even took the project one step further by introducing our team to the Microsoft Halolens augmented reality headset. With augmented reality, you can see your full surroundings and move around while simultaneously viewing what is happening on the headset.

Our project became “Soundscape Together: Group Composing Construction in Augmented Reality.” We pitched this program as a tool to be used to “banish shame” and “build engagement, creativity, and collaboration” in middle school and high school students.

In the program, small teams would work together by taking turns placing sounds in the 3D space of augmented reality. In addition to choosing and placing the sounds in the space, the program would be designed to allow participants the ability to adjust timbre, duration, volume, and pitch of sounds, to record and add sounds to the sound library, and to play back, edit, and save the final “soundscape.” 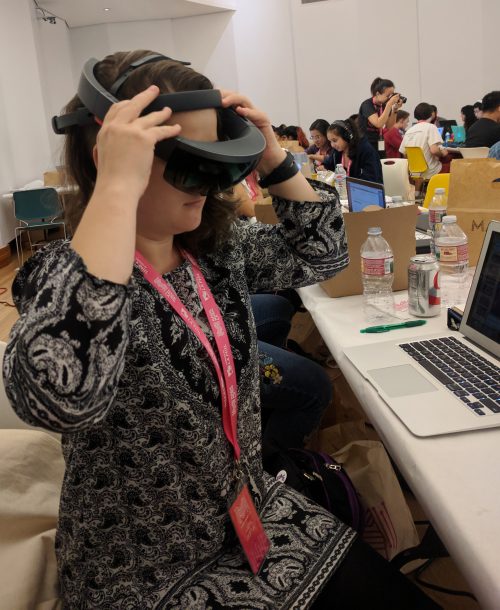 Hattie trying on the Microsoft Halolens. Photograph by her teammate Karlie Traversa.

Human Bonds: Can the Power of Music Be Captured by Technology?

Through the Soundscape Together project, the goal was to create an experience to bring people together. Building trust through a musical challenge, students would be stretched outside their comfort zones. Because there would be no right or wrong answers, students could innovate without fear of failure while responding and interacting collaboratively.

This type of bonding is something I have experienced time and time again as a musician. Powerful connections grow and connect people when music is made together. Perhaps the best description of this phenomenon is one by James Whitbourne:

To perform together as musicians at the highest level, it is necessary to love another’s musicianship or talent. This does not mean that everything is perfect; just as you can love someone even if there are aspects you might want to be different, so you can come to love the musicianship and creative force that stands before you as co-creators of sound. Since love and trust are so bound together, it is not surprising that so strong a feeling occurs at the moment when the need for trust is at its highest. I believe the creation of love through musical performances is one of the things that make us human. It is part of what makes it worthwhile to be a living human being.

Though Whitbourne speaks specifically of musicianship at a professional level, I believe this deep experience is not a phenomenon limited to for professionals. This sense of connection can happen for people at all different levels through various musical experiences at any stage of life.

Because of my background studying classical music performance, this incredible power of music was what I hoped to focus on at Hack Music LA. As I observed idea pitches and project development throughout the weekend, though, it was intriguing to see the approach to music taken by the “hackers” – those whose backgrounds were primarily in engineering and game making. Of course, everyone involved was there because of their passion for tech, music, and positive change. Naturally, though, varying experiences with music meant there were a wide variety of projects and goals pursued by the teams. Some projects aimed to include new demographics into the classical concert experience or introduce people to unfamiliar styles of music. Some projects aimed to create programs for music education or practical tools for musicians. Some aimed to incorporate music into our daily surroundings or create tools for people to create sounds using their phones.

The technology, passion, expertise, hard work, and skills I saw put to work throughout the weekend were all incredible. However, the experience left me wondering whether the projects proposed could really capture the ultimate mission I was inspired by on the Hack Music LA website: to expand emotional access to others.

I found myself deeply considering the question: can apps, tools, games, or programs truly create an experience comparable to the powerful human experiences people share through in person music making with voices or real instruments as in youth orchestras, church choirs, chamber music festivals, or school musicals?

Call to Action: Shaping the Future

The technology I experienced at Hack Music LA was incredible, eye-opening, and inspiring, but I am still not sure exactly what I think about it with regard to tech’s relationship with music. One thing is certain though; no matter what, there will be technology. Inevitably people will continue to work with and expand on new technologies. As this trend continues, I believe it is crucial that our community of musicians working in performance, teaching, and arts innovation keep our eyes open to this fast-paced evolution.

New technologies have potential to be astonishingly wide reaching and influential. With this potential, it seems reasonable to expect that these technologies will affect peoples’ concepts of music and shape society’s perception of music’s power. For this reason I ask, what part will we – as classically and thoroughly trained music professionals who understand intimately the power of music – take in it?

Is technology an avenue we can use to share the deepest, most transformative, human elements of music and music making?

If so, how can we connect and work with technology “hackers” to make this a reality?

If not, how can we maximize our impact in a world saturated by significant influencers?