The Basics on PASIC, from Percussion Student Oliver Xu 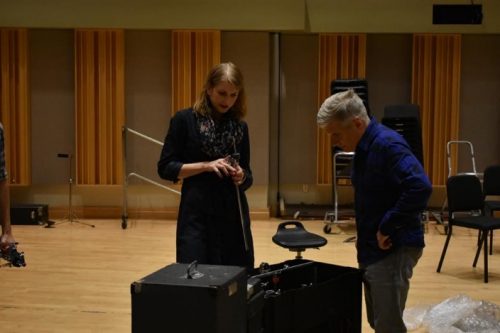 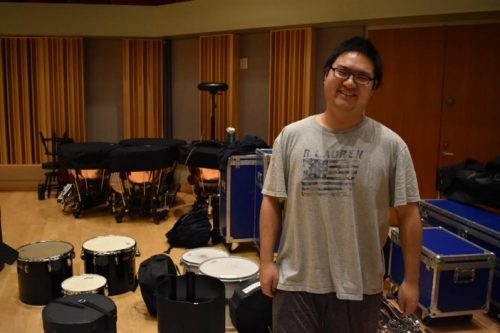 After our successful Tuesday night concert in Kilbourn Hall, it was time to prepare for our trip to PASIC. The first thing that we needed to do was the momentous task of loading a van with all of our percussion equipment. Thursday evening, we gathered in EEW 415, where the majority of our percussion inventory is kept. Every single instrument, from a five-octave marimba to a pair of finger cymbals, had to be securely packed in travel cases before being loaded into the van. Our percussion technician, Brian Stotz, was key to making this process as efficient and thorough as possible. Thank you, Brian, for all of your help and support! A few hours later, our storage room was nearly empty and our van was full. The ensemble members headed home to pack personal items and get some rest, since we needed to wake up bright and early the next morning.

At 6:30 a.m., we met in front of the school, after the first snowfall of the year took place overnight. After boarding the bus and departing around 7 a.m., most of the ensemble quickly fell asleep. Nine hours later, we arrived in Indianapolis and checked into The Westin, our hotel for the weekend. After grabbing a quick dinner, we returned to the bus and drove over to Butler University for one final rehearsal, at approximately 7 p.m. 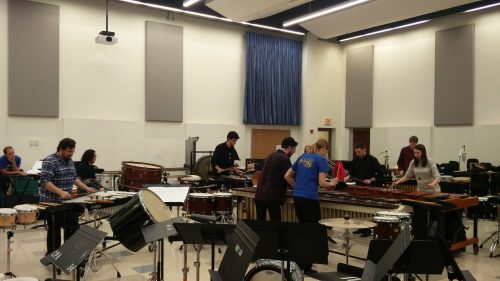 After the long bus ride, no one was looking forward to unloading all of our gear from the van, but we all knew how important one more run-through would be to ensuring a successful show the next day. This run-through was crucial because we needed to practice our set changes; as percussionists, we are responsible for not only playing the music at a high level, but also executing transitions between pieces in a professional and efficient manner. Between each piece on the program, every single member of the ensemble had a specific assignment to move instruments from one place to another. With about fifty minutes’ worth of music and a one-hour slot for the show, we had no time to waste during the transitions. After our rehearsal, we loaded everything back into the van and returned to the hotel around 11 p.m. Thanks to Butler University for letting us use their rehearsal room! 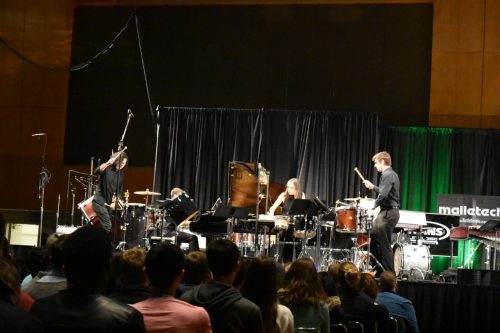 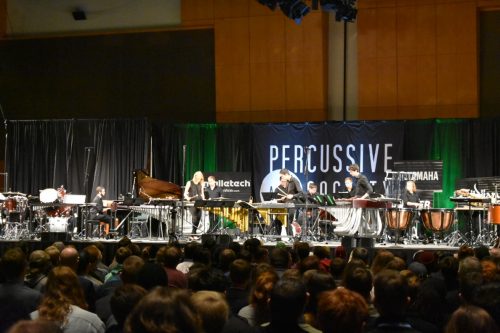 The day was finally here! After two months of preparation, it was time for our Showcase Concert as Winner of the 2017 Percussive Arts Society International Percussion Ensemble Competition. At 10 a.m., we met in the Indiana Convention Center to unload the van and set up our instruments. In the hallway outside of Sagamore Ballroom, our performance venue, we assembled all of our gear so that everything would be ready to go. The next three hours were a whirlwind of logistics as we moved everything onto the performance stage, and did a quick sound check for each piece. At 12:50 p.m., the doors opened and a large crowd of PASIC attendees came rushing in to grab seats. A few minutes later, Professor Burritt came backstage and gave us a genuine and inspiring pep talk. Then, it was time for us to take the stage. At 1 p.m., Stella Perlic (BM ’18), kicked off our concert with the groovy bongo introduction to Michael Laurello’s Spine.

Laurello’s Spine is a popular new piece for three percussionists and pianist, and also the oldest piece on our program, which is remarkable as it was only composed in 2014. Laurello uses a wide array of drums and metals, in addition to glockenspiel, crotales, and piano, to create an engaging and impressive showcase for the performers. Kevin Zetina (BM ’18), Greg Doscher (BM ’18), and Victor LaBozzetta (BM ’19) performed alongside Stella, and instantly grabbed the audience’s attention with their musicianship. Stella says that “opening the concert was really scary, but I looked into the audience and saw all the alumni and it made me feel more confident.”

Next on our program was Cloud Folk, a brand-new piece from New Zealand composer John Psathas. Cloud Folk, the recipient of the 2017 John Beck Composition Prize, was commissioned by Michael Burritt for the Eastman Percussion Ensemble. Written for eight percussionists and pianist, Cloud Folk is a truly epic work that takes the listener on an incredible journey with its engaging melodic lines and unique textures. Our junior class, consisting of Victor LaBozzetta, Noel Holloway, Gordon Fry, David Yun, Hannah Dick, and myself, along with graduate students Andrew Bockman (MM ’19), Hannah Weaver (DMA ’18), and Kurt Galvan (DMA ’18) on piano, took part in this world premiere. Gordon says that Cloud Folk “was the kind of piece where you had to be actively listening to everyone or else it couldn’t possibly stay together. That vibe created a really neat interdependency that made the effect of the piece a true team effort; every part was crucial.” I can say that the entire process of putting Cloud Folk together has been one of the most rewarding musical experiences of my career; performing this piece at PASIC was an exhilarating conclusion to this journey. 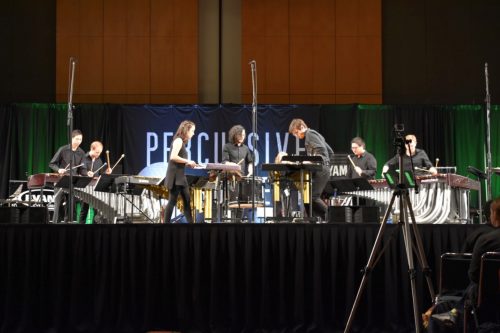 The third piece on our program was another brand new work written for the Eastman Percussion Ensemble. This piece is extra special because it was written by Victor LaBozzetta (BM ’19), one of my classmates and best friends. The Feeling of Coming Home, for eight percussionists, was given its world premiere by the juniors and seniors of EPE. Put quite simply by Greg, who started the piece with a beautiful vibraphone solo that captivated the audience, “Victor’s piece was fun to play, but working with him was a BLAST!” It was an honor to perform The Feeling of Coming Home, a sincere and unique work that was written by one of our own. 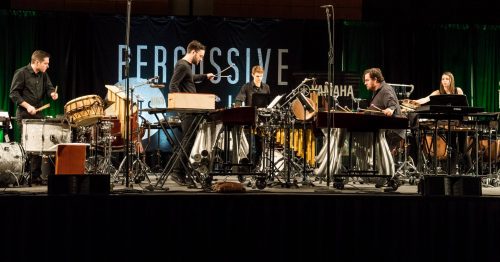 The penultimate piece on our program was ESM Professor of Music Theory Matt Curlee’s Decay No. 1, written for EPE last year. At PASIC, graduate students Cameron Leach, Josh McClellan, Catherine Cole, Connor Stevens, and Brant Blackard brought this incredibly creative new work to life. Brant says that “performing Decay No. 1 was a really rewarding experience; its complexities challenged everyone in the ensemble and also allowed us to explore some great colors with instruments such as temple bells, metal pots, etc. (and lots of wind chimes!).” 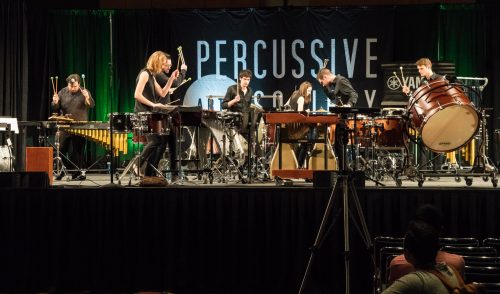 We concluded our PASIC show with one last world premiere, from our very own Professor, Michael Burritt. MAG7, performed by our seven graduate students, redefines virtuosity in a way that is extremely satisfying to experience. Hannah Weaver says about MAG7, “Playing that piece is honestly an adrenaline junkie’s dream. The whole piece required such a high level of focus and energy from all of us to keep from running off the tracks. But it was the kind of borderline exciting-terrifying energy that made the whole performance a huge rush. The thing that made the whole performance so satisfying, though, was this feeling of group energy and drive the whole time–I just remember looking around at various times throughout the piece and catching everyone just grinning. It was such a blast to play together.” At the end of MAG7, the audience instantly erupted in a standing ovation, and the entire Eastman Percussion Ensemble returned to the stage to accept the enthusiastic applause. 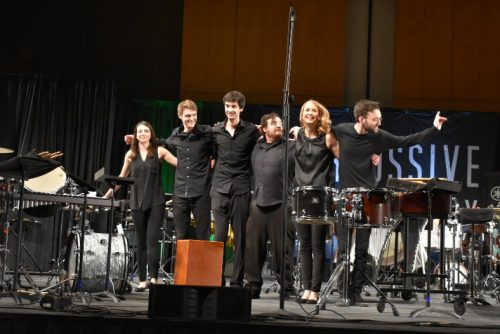 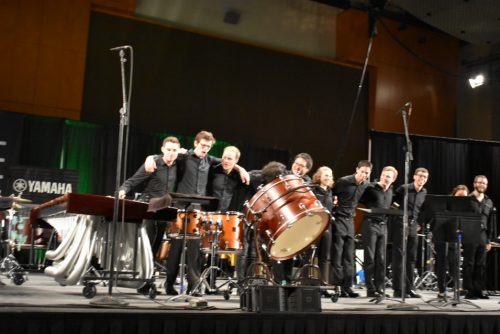 At 5:30 p.m., an Eastman alumni reception was held in honor and celebration of our PASIC performance. The entire ensemble attended the reception and mingled with alumni, including old friends who had graduated recently and renowned legends in the percussion world. During the reception, John Beck, Professor Emeritus of Percussion, praised the Eastman Percussion Ensemble for raising the standard to new heights with its performance, and noted that the percussion world had come a long way since the very first PASIC that he hosted in 1976 at the Eastman School of Music. 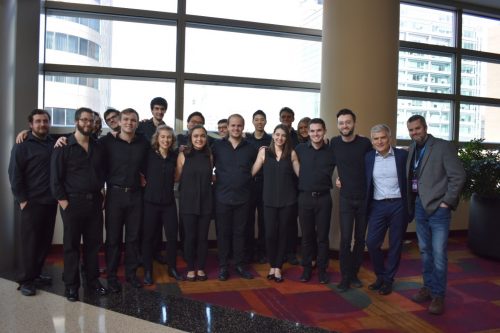 Pictured above is the Eastman Percussion Ensemble, along with Kurt Galvan, Matt Curlee, and Professor of Percussion Michael Burritt. Performing at PASIC 2017 was an incredible experience that we will never forget. The journey was long and challenging, but every minute of rehearsal and practice was worth it for the moment when our program came together at PASIC, on stage during our showcase concert. To be a part of the Eastman Percussion legacy is a huge honor, and we are proud to have contributed to that legacy with our PASIC performance. Check out this fantastic highlights reel, which was put together by Four/Ten Media and sponsored by Evans Drumheads.

Thank you for reading, and I hope that you enjoyed following along with our PASIC trip and performance! Special thanks to Emma Jane Geisler and Matt Curlee for taking the photos used in this post. For a closer look at our studio, follow us on Facebook and Instagram.