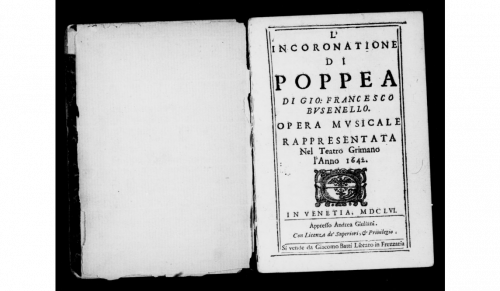 The original libretto of L’Incoronazione di Poppea, by Francesco Busenello (1642)

Next month. Eastman Opera Theatre presents a true masterpiece of baroque opera: Claudio Monteverdi’s L’Incoronazione di Poppea (The Coronation of Poppea). The production features stage direction by Stephen Carr and musical direction of Paul O’Dette. This is the first blog post by Master’s student in voice Kameron Ghanavati, one of the students playing Nerone in the production, about the opera and his preparation.

A narcissistic Roman Emperor, his determined and relentless lover, a scorned wife, and an exiled husband are all under watch from the Gods above…

A night at the opera never sounded so scandalous and alluring until Claudio Monteverdi’s 1643 production of L’incoronazione di Poppea (The Coronation of Poppea). Filled with drama and passion, the work represents a new era of opera that would alter its course in history forever. Eastman Opera Theatre (EOT) will present the work in Kilbourn Hall from November 2 until November 5.

The opera begins as the Gods Fortuna, Virtu, and Amor argue over who is the greatest. Amor ultimately convinces her fellow Gods that she has the most influence over mankind, thus beginning the opera’s drama. The piece chronicles Emperor Nerone (Nero) as he embarks on a sleazy mission to oust his wife, Ottavia, and marry the desirable (and older) Poppea. In the midst of this drama, Nerone becomes mentally unstable. However, the piece ends on a happy note with the marriage of the two lovers, despite their abhorrent journey to the altar.

An interesting fact to note: the opera was published as two versions, one originally premiered in 1643 in Venice, and a revised version produced in Naples in 1651. The Eastman Opera Theatre version is a hybrid of the two, favoring the Naples version. This creates a challenge for students, because no two recordings of Poppea are the same. Further, this piece is unique because it is the first opera based upon a historical event and characters. 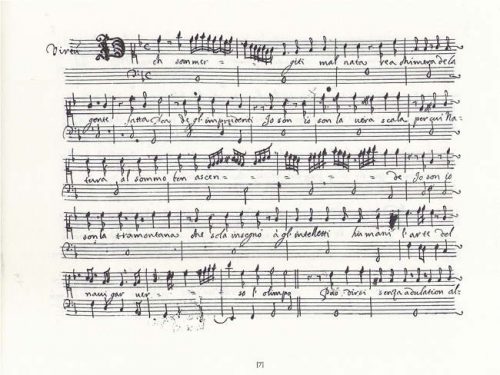 A facsimile page from the prologue to L’Incoronazione di Poppea

My fellow castmates and I have been hard at work on the piece since the summer. Athene Mok (“Poppea” on November 2 and 4) comments that one of the challenges for her during this process is memorizing the piece. I will agree with her on this point. The constantly changing rhythms and seemingly “easy” melodies do not always match that of the accompaniment – and there is a deliberate reason for that. Monteverdi created harmonies and rhythmic devices that were decades ahead of his time, resulting in great difficulty for singers at some moments in the opera.

Kevin Bryant (“Nerone” on November 2 and 4) remarks that “scores of early music tend to walk the middle ground; they expect you to do what is written, but also expect that you will not do what is written if it does not make sense”. Kevin’s comment perfectly sums up a major challenge when learning this piece for all personnel involved. For such difficulties, a professional who understands the music is required. 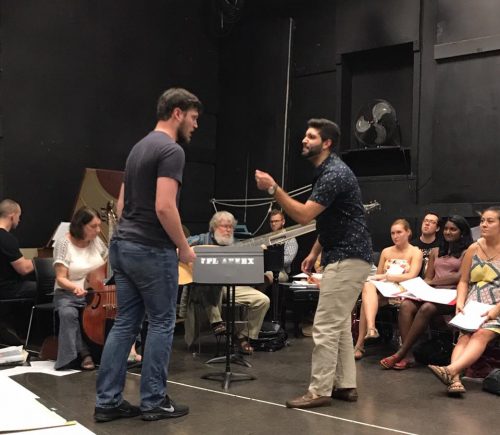 That particular professional, in EOT’s case, is Professor Paul O’Dette, the music director and conductor for our production of Poppea. Professor O’Dette currently serves as part of the Lute and Musicology Faculty here at Eastman and conducts the Collegium Musicum ensemble as well. His extensive background in Early Music has aided the whole cast during the coaching process.

Personally, a challenge for me was not only memorization and finding my character, but also finding the chemistry with my Poppea, Laura Saunders. When two actors are required to share romantic and/or intimate moments in a dramatic work, the challenge is finding your character and their character, then finding the middle ground that connects the two. This is a common hurdle for many performers, and once a level of comfort is met, it becomes quite easy. Thankfully, both casts have successfully found their chemistry, and the result is very powerful and exciting. 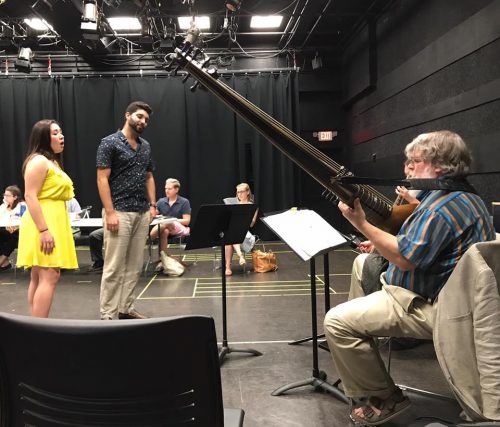 For young singers, the piece can appear to be untouchable due to its specific nature and various complications. Along with Athene and Kevin, I have become interested in Early Music since joining Eastman’s Collegium Musicum (directed by Paul O’Dette) over a year ago. When aided by a musician who understands the style so well, the process becomes less daunting. My recommendation for students looking to gain more experience in this genre is to find a coach who specializes in it and research common performance techniques. Once a basic understanding is established, the music is not as difficult as it appears.

In a little over a month, the cast and crew have coached the whole work, staged it, and are now ready for the next step. Now, we work towards cleaning up some scenes, running the whole work, moving into Kilbourn Hall, adding costumes and lighting, and working through dress rehearsals. More on that experience later…

For now, we are looking forward to opening in two weeks! Don’t miss L’incoronazione di Poppea in Kilbourn Hall November 2, 3, and 4 at 7:30 p.m. and November 5 at 2 p.m. Pre-performance talks will be presented one hour before each performance in the Ray Wright Room (Room 120) at the Eastman School of Music. The work will be sung in Italian with English subtitles.