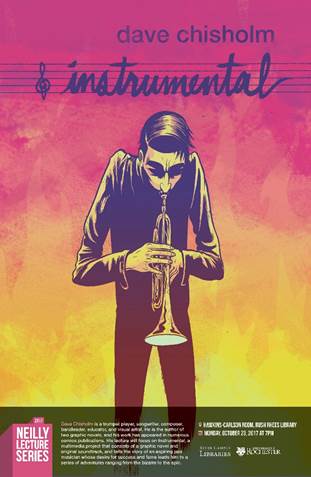 Dave Chisholm, who received a Doctorate In Musical Arts from Eastman in 2013, is a trumpet player, songwriter, composer, bandleader, educator, and visual artist. In other words, describing him as multi-talented might be an understatement. Chisholm will be talking about his multimedia comic book project, Instrumental, at the University of Rochester’s Rush Rhees Library, in the Hawkins-Carlson Room, on Monday, October 23 at 7 p.m.

For his Neilley Series Lecture, Chisholm will cover a handful of topics. He will discuss his own background (and further discuss his own creative process and how the comic came to be); self-publishing comics; his other work; his own personal philosophies; and what he calls “the meat and potatoes”: how Chisholm crafted the story-telling rules and the musical symbols in Instrumental, detailing how those two work together to explore how “time” relates to reading a comic, as compared to listening to music.

Instrumental is published by Z2 Comics, and as an accompanying soundtrack written, performed, and mixed by Chisholm, released through Outside In Music. It tells the story of Tom Snyder, a jazz trumpet player who is lonely, and profoundly unhappy with his own playing. The story follows Tom, along with some vignettes about his bandmates, and his journey after finding a magical trumpet that not only makes Tom a virtuosic trumpet player, but also kills people who hear it. Jokes about Tom having “killer chops” not notwithstanding, this 224-page comic ranges from the personal, to the epic, to the bizarre. The characters are based on Chisholm and many of his friends, and Instrumental tells “the story of Dave” in many ways, particularly dealing with the creative process.

This latest work follows Chisholm’s previous self-published comic book, Let’s Go to Utah!, and his other “client work”. Chisholm says that the draw of the comic isn’t necessarily that one person did all of the writing and drawing and created a musical score, but rather that it is, in his words, of “fairly high quality” — the comic and the music are exceptional on their own. Chisholm is not one to heap praise on himself, but the results have spoken for themselves. 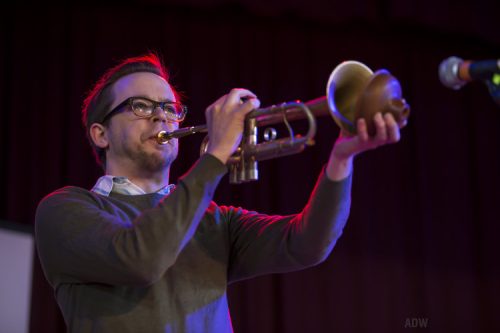 “Comics and music have always been a part of my life,” said Chisholm, who was born in Alaska and spent his formative years growing up in Utah. He began violin at age four, and has often quipped that his mother believes his first word was “Spiderman.” His life, which has described as “a series of reactions,” took many circuitous turns before the release of Instrumental.

Building up to his “comps” (comprehensive doctoral exams) at Eastman, Chisholm developed an incredibly strong work ethic and schedule. As soon as he completed his final tests, he took no time off and went right to work on Instrumental, which had been knocking around in the back of his mind. An “obsession” formed, and he completed this immense project between February and December of 2013. And then he had to sit on it for four years.

While he was spending the time fleshing out details, polishing the art, and developing the soundtrack, Z2 Comics was undergoing restructuring. During those four years, his life took one of those “reactions,” and he started going back to his rock and songwriting roots in Utah, forming a band called “Talking Under Water,” that served as a vehicle for his thoughtful “rock art songs.”

Chisholm is incredibly grateful for everything the comic has given him, especially because of its autobiographical elements. He admits that preparing this talk is a “big deal” to him. In particular, he believes that his talk will help his audience better appreciate the music of the soundtrack alongside the images of the comic. 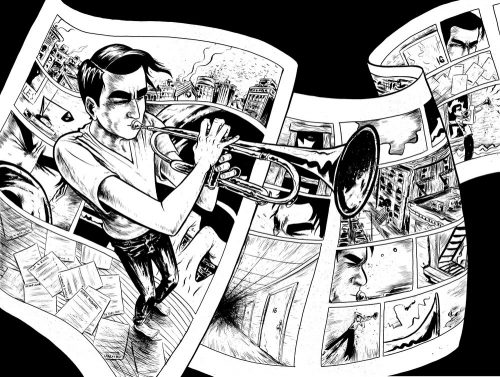