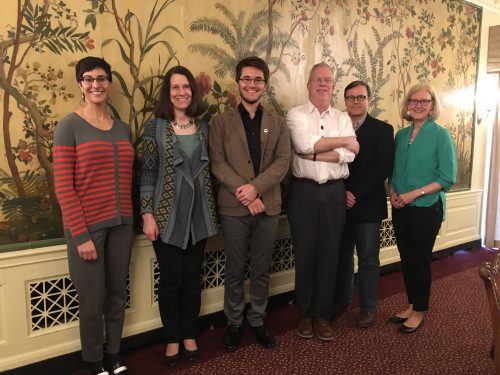 On May 6, 2017, Eastman hosted the Third Annual Tallon Perkes Flute Competition, held in memory of Eastman alumnus Tallon Perkes (BM ’84) to inspire the next generation of Eastman flute players. Fourteen Eastman flutists competed; this year’s winner was Zachary Osiniski, who has since graduated from Bonita Boyd’s studio and is now pursuing a master’s degree in music at the University of Illinois.

When asked about the competition experience, Zachary replied:

This was my third time competing in [the Tallon Perkes Flute Competition], and to be quite honest, I almost didn’t compete. But, I figured I might as well do it because it was my last year to try. In the past I’d chosen big solo pieces to show off virtuosity and skill, but this year I decided I’d take a risk and play a piece that was the complete opposite: lyrical, colorful, and subtle. Having nothing to lose, all I had to do was go on stage and play a piece that I love [Black Anemones by former Eastman composition professor Joseph Schwantner], and a handful of excerpts I’ve been playing for years.

Marianne Gedigian, a judge for the annual competition and Professor of Flute at the University of Texas in Austin, had this to say about Zachary’s performance:

It is always difficult to make a choice for a singular prize, but Zach’s performance was filled with gorgeous sound from the first note to last, excellent intonation, technical prowess and just general polish and attention to details. I appreciated all of the performances but found Zach’s to be a professional level with great sophistication. 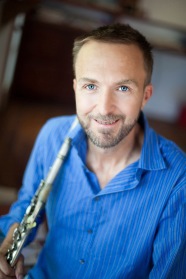 A native of San Diego, California, Mr. Perkes began his professional career as a teenager substituting with the Pacific Symphony and the San Diego Symphony while studying with their respective principal flutists, Sylvia Greenfield and Damian Bursill-Hall. A talented visual artist as well as a musician, he studied drawing and painting, first with his mother and grandmother and later in Barcelona, Spain. Mr. Perkes obtained his BM and Performer’s Certificate at the Eastman School of Music with Bonita Boyd where, in his first year, he won a position with the Rochester Philharmonic Orchestra. He played principal flute on the Eastman Philharmonia’s recordings for Mercury Records. Subsequently, Mr. Perkes finished his studies in European courses with such renowned flutists as Alan Marion, Peter Lucas Graf, William Bennett, Peter Lloyd, and James Galway. He was a three-time prize winner of the National Flute Association’s Young Artist Competition and went on to an international career as an orches-tral flutist, soloist, chamber musician and clinician.

Before assuming his position as Principal Flute of the San Antonio Symphony, Mr. Perkes was, for five years, Assistant Principal and Acting Principal Flute of the City Orchestra of Barcelona, Spain. He was a concerto soloist with orchestras in Kumamoto, Japan, Lima, Peru, and Baja California, and on several occasions with the San Antonio Symphony. His most notable performance with the latter was the Pied Piper Fantasy for Flute and Orchestra by John Corigliano. Mr. Perkes was a longtime member of the Olmos Chamber Ensemble (principal woodwind chairs and concertmaster of the San Antonio Symphony) which presents critically acclaimed concert series each year, and with whom he made numerous recordings. Other chamber ensemble engagements included the Cactus Pear Music Festival, the Peninsula Music Festival, and the West End Players of Dallas. Mr. Perkes devoted several summers to performing in the Santa Fe Opera and the Colorado Music Festival, as well as performing and adjudicating at four National Flute Association Conventions. His cadenzas for the Mozart Flute Concertos have been published in Flute Talk magazine, and he commissioned and edited Elisenda Fabregas’ Andante Appassionata for Flute Solo (published by Alphonse Leduc).

In addition to his busy performing schedule, Mr. Perkes taught and mentored many fine flutists in San Antonio, at the Interlochen Academy for the Arts, and during many summers at the Interlochen Summer Fine Arts Camps. Some of his advice for students in writing Mozart cadenzas follows: “Be patient but bold, always respectful of your first instincts yet willing to constantly amend and improve as you become more enlightened to Mozart’s musical language. The examples and observations I offer are intended to assist you in your journey of observation, experimentation, and construction.”

Shortly after Mr. Perkes retired from the San Antonio Symphony, he graduated with a Master’s degree in Architecture from the University of Texas at San Antonio and was poised to embark on a new career. He is lovingly remembered by his family, friends and colleagues for his fantastic contributions to the world of music, art, architecture, and education. Outside of his professional life, Mr. Perkes loved to explore the wilderness, camp, hike, travel, and cheer on the Spurs basketball team.

ABOUT THE COMPETITION
The Tallon Perkes Competition is in honor of Tal Perkes, a flutist and friend who was dedicated and thoughtful in performance, teaching, and practicing (most of all).