Bringing Music Back to the Brain: Part 2 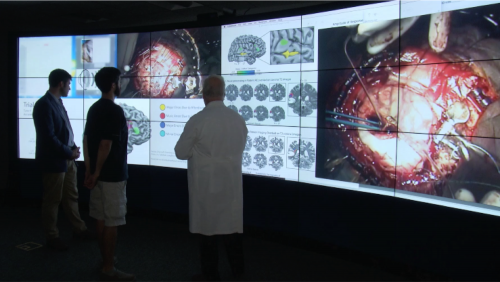 This is Part Two of an interview with Eastman School of Music Professor of Theory Betsy Marvin.

For a brief moment, the video took over the Internet. A young man on his side with sax in hand, his brain exposed. He played a beautiful melody, and the operating room cheered. But there’s more to the story. The musician, Dan Fabbio, had a tumor in his superior temporal gyrus, the area of the right temporal lobe that’s colloquially known as “the brain’s music processing center.” I spoke with Eastman professor Betsy Marvin (Professor of Music Theory at the Eastman School of Music and Chair of the Music Theory Department) about her involvement in this incredible project, of how UR and Eastman came together not only to remove a tumor from this beloved musician and educator, but to engage in a research project that resulted in the most detailed mapping of music in the superior temporal gyrus ever done. In Part One, Professor Marvin described the processes leading up to the surgery; in Part Two, she describes the surgery and its results.

Moving forward to the operation, the awake operation is actually fairly common, and there have been other cases of musicians playing their instrument under the knife. So the brain mapping aspect of this is what makes this surgery unique.

One of the things that made this different was the mapping paradigm that Doctors Mahon and Pilcher worked out ahead of time; the very precise mapping. Secondly, the exploration of the direct juxtaposition between language and music, and the discovery of the area where language was not impaired, but music was.

That was the eventual result, then? How did he perform in these tests when getting direct electrical stimulation to different parts of his right temporal lobe?

Once they woke Dan up, he was a little groggy, there was anesthesia around the craniotomy, but the brain itself doesn’t have pain receptors. Once he was awake, then they started stimulating the spots in the brain that they identified before, and asked him to do the speaking task, and the singing task, alternating. They would stimulate each spot while he performed the language and music tasks and assess whether his speech was impaired or the humming was impaired. In lots of spots, he sang perfectly, and spoke perfectly. I was getting a little nervous where I was sitting, because I suddenly started thinking: “How wrong does it have to be to be wrong? If it’s the correct melody, but it’s a little out of tune, should I say it’s right or wrong?” It’s difficult when you only have the option of correct or incorrect to decide.

His incorrect responses would have completely wrong contours, he was going in the wrong direction… He couldn’t find the first note, or he found the wrong first note, or he hesitated, and then restarted again and again until he stopped. Sometimes he would even speak, and say “that’s not right.” He was clear that he could hear what he was doing, but he couldn’t fix it.

In any of this electrical stimulation, was his speech affected?

Did he have trouble with both melodic and rhythmic contour? Were there instances where the pitch was right or the rhythm was wrong, or vice versa?

That’s hard to answer. What happened is that when he got the pitch wrong, he would peter out and not complete the rhythm. I would say – if I had to choose – it was more of a pitch impairment than a rhythm impairment. But I think it was a bit of both, because he would stutter to a stop and not know how to continue, and who knows if he was able to continue the pitch or the rhythm?

He is a music teacher, so he is a skilled musician to begin with. Is he a professional working musician too?

He teaches in public school, and he gigs around. He also told me afterwards that he’s active as a coach for fife-and-drum bands. He’s a very active musician.

So he was a talented musician, so if someone’s score on the aptitude test reflects their musical ability, would someone with perfect pitch be more affected by the electrical stimulation than someone who doesn’t?

So when he picked up the sax to play it, was all the stimulation done at that point?

The interesting thing about the saxophone piece is that it’s a Korean folk song that Dan chose and memorized called “Arirang,” from which the John Barnes Chance wind ensemble piece, Variations on a Korean Folk Tune, comes. It’s a long, sustained, beautiful, and lyrical melody. Some weeks before the surgery, we came into the pre-op testing and preparation, and all the doctors and nurses were there, and they asked the patient to play the melody for us. He started to play it, and one of the nurses got very alarmed, saying “No, no, no, he can’t play this! Because that long sustained breath control and pressure may cause the brain to protrude from the skull.”

They were very concerned about that sustained pressure on the brain. I coached him through how we could alter the melody. We inserted rests, and made the melody less legato and lyrical, so he could stop and take breaths and not have to sustain anything for a long period of time.

They brought the saxophone to him, and he’s lying on his side with his brain exposed; it was very awkward. Someone was holding the saxophone up for him. He played it absolutely perfectly. The whole operating room burst into applause, laughter, and congratulations. It was very special.

Did you develop a good working relationship with the patient?

Yes, I did. At one point, I drew him aside and thanked him for his willingness to go through all this. As you can see, going through the timeline, it was months and months of pre-op testing and preparation… Dan looked at me and said something like: “I have a tumor in my brain! Music is my life and my love, and I want to have it preserved.”

Yes. No more seizures or hallucinations. His playing is beautiful; I heard him when we were recording for the video in Hatch, and the recovery period was strikingly short, in my opinion. We did this surgery in June, and he was teaching in September. I asked him if the music was right back the day after we did the surgery, and it wasn’t here immediately. It took a little while for the swelling to subside and the healing to take place, and then his full music abilities returned.

What are the implications of this surgery for what you do?

Prior to this experience, most of my work – all of my work – was cognitive and behavioral. It was tests for musical memory, absolute pitch, how quickly can someone learn, how does that change when the music is in different musical tonalities, for example? My work is based on behavioral tests that aren’t medically invasive.

This has changed my whole perspective on the neurological side of music cognition. I haven’t had access to that understanding before. There’s a hope in me that if other cases present themselves in musicians that we can continue this research and provide some benefit to others.

To read Part One of Dan’s interview, click here.

To see a video of the entire surgery process, click here.

Betsy Marvin, along with Doctors Pilcher and Mahon, will take part in a MEL Talk called Mapping Music During Awake Brain Surgery on Saturday, October 14, from 1:30 to 3 p.m. in the UR’s Hutchison Hall, Hubbell Auditorium, River Campus. Admission is free.