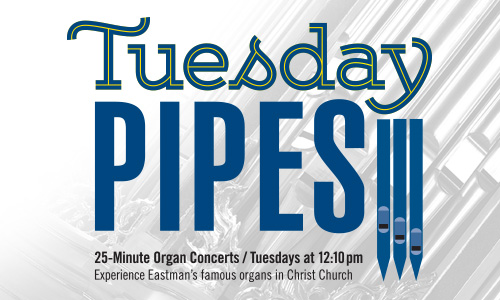 If your typical lunch break includes a sandwich at your desk, a trip down to the local coffee shop, or a half hour with your favorite book, you might consider adding something else to your agenda: a free pipe organ concert featuring some of the best performers around.

Every Tuesday, students and faculty from the Eastman School of Music provide free lunchtime concerts at Christ Church, home to two spectacular organs with more than a century of organ building between them. The Craighead-Saunders Organ is a scientific process reconstruction of an instrument that still exists today in Vilnius, Lithuania, created by central German organ builder Adam Gottlob Casparini in 1776. Completed after six years of research into 18th-century organ design, it is perhaps the only instrument in the United States where one can hear the music of Bach just as Bach would have heard it. On the other side of the pews, the Hook & Hastings Organ represents the American Romantic tradition, featuring original pipes from 1862 and 1893.

On September 19, Eastman doctoral candidate Malcolm Matthews will perform J. S. Bach’s chorale prelude on O Lamm Gottes, along with works by Buxtehude and Franck. Matthews regularly performs as a soloist and with ensembles and has mastered a wide variety of repertoire, ranging from Monteverdi to Xenakis. He was the first-place winner of the 2013 Westfield International Organ Competition and first-prize winner of the 2005 Southeastern Region IV Young Organists’ Competition.

Madeleine Woodworth takes the helm on September 26 with a newly composed work written for the 2017 AGO Student Commissioning Project. Woodworth was involved in the grant-writing process to fund a new piece for organ, which was premiered in May of this year. Entitled On Track, it was written specifically for the Hook & Hastings organ in Christ Church and features everything from train whistles to Schoenbergian twelve-tone rows. Woodworth won first place in the 2016 Annual International Organ Competition in West Chester, Pennsylvania, and she was featured as a “Rising Star” in the American Guild of Organists’ National Convention later that year.

On October 3, don’t miss a rare opportunity to hear Bernhard Klapprott, Professor of Harpsichord, Early Music, and Organ at the Liszt School of Music in Weimar. Klapprott is an expert on early music who regularly performs internationally as a keyboard soloist and conductor. He has recorded numerous works by J. S. Bach and will share his talent in Rochester next month.

Jacob Fuhrman will perform on October 10, offering a diverse program that includes J. S. Bach and Paul Hindemith. Like all Tuesday Pipes concerts, this performance will offer an opportunity to hear two vastly different instruments side-by-side. Fuhrman is an Eastman doctoral student and serves as Organist and Director of Liturgical Music at St. Joseph’s Catholic Church in Penfield, New York. He has also taught undergraduate aural skills course and organ lessons at the Eastman School.

For more information on the Tuesday Pipes series, check out our webpage. Meanwhile, don’t miss out on other recurring organ concerts, including the Eastman Organ Community Concerts, Going for Baroque, and the Candlelight Concert Series at Christ Church.