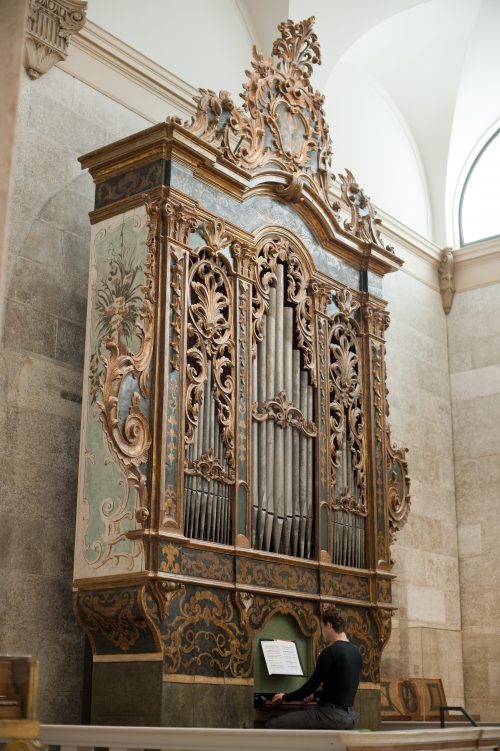 Straight from the pages of Greek mythology, Orpheus was a poet and prophet whose musical talents were said to charm all living things—and, according to some legends, even inanimate objects. It is only fitting that such a character would work its way into the title of the upcoming Third Thursday concert, which features two of the world’s most renowned performers in a rare duo appearance.

Paul O’Dette is an acclaimed lutenist with more than 140 recordings to his name, along with two Grammy awards and seven Grammy nominations. He gives regular concerts and clinics worldwide, with events spread across Europe, North America, Japan, Australia, Russia, and South America. He serves as Artistic Co-Director of the Boston Early Music Festival and Director of the Collegium Musicum, Eastman’s early-music ensemble. O’Dette is Professor of Lute at the Eastman School.

Edoardo Bellotti is Associate Professor of Organ, Harpsichord, and Improvisation at Eastman. He has performed in Europe, the USA, Canada, Japan, and Korea, and he is widely known as an expert of Renaissance and Baroque music. He has published numerous articles and critical editions of organ music and can be heard on more than thirty critically-acclaimed recordings.

On the third Thursday of every month (during the academic year), the Memorial Art Gallery hosts a concert celebrating Eastman’s Italian Baroque Organ, which resides in the Gallery Fountain Court. As a non-organist unfamiliar with the inner workings of this instrument, I nonetheless find myself awed by the way these concerts transport me back in time. The Italian Baroque Organ is a single-manual instrument featuring one very tiny keyboard, and yet the sounds that artists like Bellotti can draw from its pipes seem larger-than-life—particularly when you’re entranced by the works of great Italian painters on the walls around you. 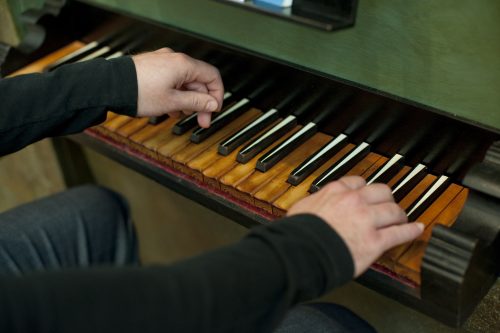 The Italian Baroque Organ was originally built in 1770 in central Italy. It is the only instrument in North America of its kind, making Rochester the one place where can you hear 18th-century organ music sounding just as it did to the composers who wrote it. The upcoming concert will include works by Frescobaldi, Dowland, Monteverdi, Kapsberger, and more.

If you’re free this coming Thursday, don’t miss the chance to hear two world-renowned artists in concert together, all taking place in one of the most picturesque concert settings you’ve ever experienced. For more details on events featuring Eastman’s Italian Baroque Organ, visit our Facebook page at facebook.com/esmbaroqueorgan.