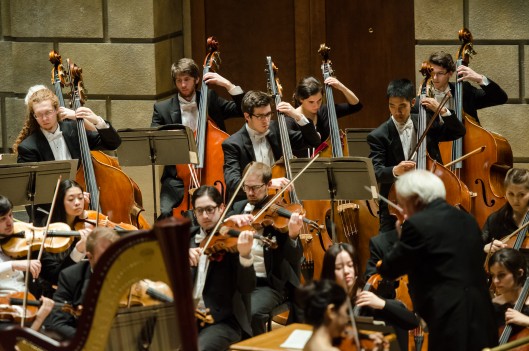 Eastman’s School Symphony Orchestra (ESSO) and the Eastman Philharmonia kick off their concert season on September 27 at 8 p.m. with a joint program. ESSO will be performing Wagner’s Overture to The Flying Dutchman and Beethoven’s Piano Concerto No. 4, featuring soloist Yi-Yang Chen. The Philharmonia will perform Saint-Saëns Symphony No. 3 in C minor (Organ Symphony) in the second half of the program.

Piano soloist Yi-Yang Chen is the assistant professor of piano and music theory at East Tennessee State University. Born in Taipei, Taiwan in 1990, Mr. Chen has been playing the piano since the age of 8. He holds a Master of Music from The Juilliard School, where he studied with Robert McDonald and Jerome Lowenthal. Mr. Chen is currently a doctoral candidate in Piano Performance at the Eastman School of Music, where he also received the Bachelor of Music degree.

Neil Varon, professor of conducting and ensembles for the Eastman School Symphony and Eastman Philharmonia, shared his thoughts on performing Beethoven with Chen: [Beethoven’s Piano Concerto No. 4] is one of [Beethoven’s] most heavenly works. Pastoral in nature and serene in the opening movement, a dialogue with the orchestra in the second and the skies clear in optimism in the third. I’m really looking forward to sharing this program with everyone.

The Philharmonia follows the School Symphony Orchestra in a performance of Saint-Saëns Symphony No. 3 in C minor (Organ Symphony). Although the piece is popularly known as the Organ Symphony, it features an organ in two of four sections, rather than a traditional symphony for organ that features a solo organ over several movements.

Neil Varon shared his final thoughts for the Wednesday night performance: I’m very excited about conducting this concert in particular. I love these concerts where I can portray both orchestras on the same evening. I think it will be a very, very exciting night.