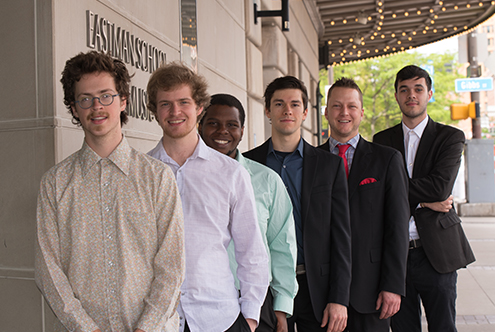 The Eastman Jazz Sextet left today (Thursday, August 24) at 2 p.m. to go around the world.

The Sextet will first work with Shobi University for their Jazz Festival on August 26, both performing and giving a collaborative master class on how Eastman approaches jazz. After that, they’re participating in the 16th Annual Tokyo Jazz Festival with two performances: the first concert of the first day of the Festival on September 1; and September 2 at the Tokyo STATION JAZZ Weekend, which includes a joint concert with the “Jazz Festival Conservatory” (JFC) All Star Big Band, presented by jazz pianist Makoto Ozone.*

For some members of the Sextet, like doctoral student Chase Ellison, this is the first time they’ve taken a trip this substantial, both in terms of distance and time traveled. They all have to deal with the stresses that come with it, particularly the worry that comes with traveling with their instruments. At least Ellison only has to worry about part of his kit.

“I’m just bringing my cymbals and sticks in a hard case,” Ellison. “Thankfully they have drums for me there, and a bass for Ryder.” He joked that he usually tells employees who don’t know what to make of it that it’s his “hat case.” It does hold a high-hat, anyway.

The band — whose members have all played together at some point, but never together as an ensemble — is preparing original compositions, which Ellison says they look forward to performing during their Shobi University experience and at the concert, as well as jazz standard repertoire. For Ellison and the rest of the students, despite the bother of traveling with instruments, this is an incredible opportunity. But how did this come to be?

Jeff Campbell and Makoto Ozone met inside the entrance to Eastman’s Main Building while Ozone was in Rochester for the 2016 Xerox Rochester International Jazz Festival, and developed a personal and working relationship. That year, Ozone played twice with saxophonist Tommy Smith: once in Kilbourn Hall for two sets; and with Tommy and Arild Andersen’s Trio at the Lutheran Church of the Incarnate Word.

According to Ellison, after the “Eastman connection” was established, Campbell and Ozone worked together to acquire a sponsorship from the U.S. Department of State. A trip to Japan for any circumstance for an American would be exceptional, but working with the State Department gives another meaning to this trip. Not only will they be playing and teaching, but Campbell and the Eastman Jazz Sextet will be representing the United States in a more official capacity.

Jazz and overseas cultural exchange through our government has a rich history. In 1958, beloved jazz pianist and composer Dave Brubeck took his first officially sanctioned diplomatic musical tour through Eurasia, where he encountered many of the atypical time signatures he would use in his composing throughout his career. Brubeck and his band were among the first to act in this official capacity for the U.S. Department of State.

Ellison sees this as an opportunity not just to share musical ideas and sensibilities, but to symbolize something much greater.

Please follow Eastman’s website and social media pages for updates, photos, and blog posts from Ellison and the rest of the musicians.

*More on Makoto Ozone:
Ozone is accustomed to traveling between the United States and Japan, and he has become an unofficial ambassador to the US for the excellent jazz happening in Japan. His original inspiration for studying came after he dove into the music of Oscar Peterson. Ozone first came to the United States in 1980, when he entered the Berklee College of Music. He debuted his own music a few years later, and began collaborating with vibraphone legend Gary Burton. He moved back to Japan, established a great recording and performing career, and helped create the JFC All Star Big Band, which will be joined by the Eastman Jazz Sextet during the Tokyo Jazz Festival. 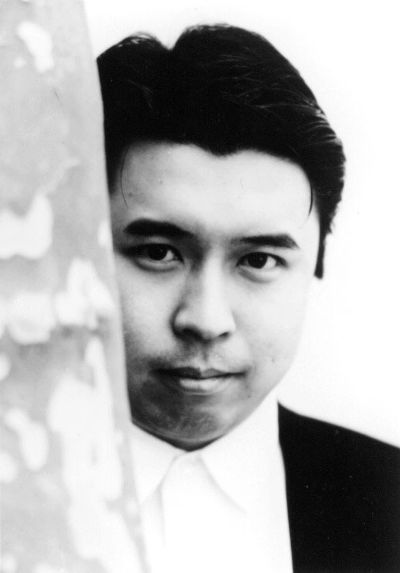