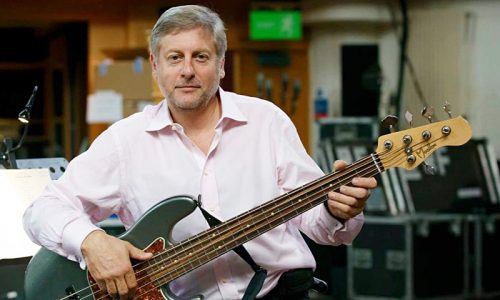 Rochester-born David Finck grew up in Philadelphia, but returned in the 1970s to study at Eastman, where he graduated in 1980. Since then he’s become one of the jazz world’s premiere free-lance bassists, making recordings with musicians from André Previn to George Michael. In the most recent, Low Standards on the SoundStream label, David not only plays, he sings an original song of his own.

What sparked your love of jazz?

I don’t know if it was actually “sparked,” but more that I got it through osmosis. I was hearing it in the house all the time. My father played guitar and a little bit of bass, and my mother played clarinet. Her radio was always on with everything from Richard Strauss to Frank Sinatra, and of course I grew up in “The Beatles Generation,” so I had The Beatles, Earth, Wind and Fire, Crosby, Stills and Nash. I had everything in music growing up.

My dad was actually a jazz lover, and he suggested I pick up the bass when they were handing instruments out in elementary school; he probably wanted someone to play with! But he helped me write out my first blues bass line, he piqued my interest, and he took me to see Count Basie’s band.

My parents had a pretty extensive record collection, and I certainly made some early discoveries from that collection, like Sinatra, and a Miles Davis record, Milestones, which still today is my favorite jazz record of all time. Two of the most influential recordings for me were Bill Evans’ Live at the Montreux Jazz Festival, and Chick Corea and Return to Forever’s Light as a Feather; I had never heard anyone play the bass the way that Stanley Clarke did on that record, nor had I heard anyone play the bass the way Eddie Gomez did with Evans. And from there, I discovered more and more musicians, like Paul Chambers, Ray Brown…

What led you to Eastman, and what made it a good fit?

All through elementary school, junior high, and high school, I was studying classical bass; I had a couple teachers from the Philadelphia Orchestra, and one teacher who worked with the Metropolitan Opera. At the time, Eastman didn’t offer a jazz program, and I didn’t want to go to Berklee, I wanted to keep my classical chops as sharp as I could. Eastman is one of the great conservatories, so when I was accepted, it was an easy choice.

What has stayed with you from your time at Eastman?

I studied with James VanDemark – it was his first year teaching there. It’s hard to believe that was forty years ago! There are technical things that he certainly taught me that I still use — theory and harmony — but there’s one thing that I have repeated when I’ve come back to Eastman a handful of times to do master classes.

I remember orientation day, it was my first or second day back in Rochester. We were gathered in a room, and a guy said to all of us first-years, “Look around the room. These are your first contacts in the music business.” It was a very powerful statement. To this day, 41 years later, there are guys I met at Eastman with whom I still work, who still hire me, and whom I still hire. We go back that far, we know each other’s playing, we’re old friends, we have a lot of common language.

Beyond that, of course playing with the orchestras was fantastic, playing in the jazz bands was great. I was invited to play in a band with Bill Dobbins, Ray Ricker, Dave Mancini, and Jeff Tyzik as the trumpet player. That was quite an honor; I was 18 or 19 years old, and I got to play with these guys. It was a good start.

Looking at your discography, you’ve played with a lot of vocalists over the years, ranging from Joe Williams to George Michael. How did you come to work with so many great vocalists?

For starters, when I was on Woody Herman’s band, the pianist was a guy named John Otto. He was a grad student at Eastman when I started with the band in 1976. John was out with Woody’s band when Rosemary Clooney grabbed him. He started calling me to play bass, at least when she was in the New York area, and I did a recording or two with her. We did some jobs with Joe Williams.

I have to say, I have always loved vocal songs, and I’m interested in the way they’re interpreted, both good and bad! I’m a huge fan of Frank Sinatra, and I think I accompany singers with a very full knowledge of the song itself, and an understanding of the balance between words and music. I think singers feel that.

After a few years in New York, I started doing a lot of work for a producer named Phil Ramone, who records with people like Gladys Knight, Dionne Warwick, and George Michael. So I did a record with George Michael. It was a great record, though he never toured with it. Then in about 2012, he decided to perform those songs – most of them were standards – and so he requested me to be the bass player. We did a European tour, and a record in London, and a DVD. I think I did two years of tours with him. He did some of the WHAM hits of the ‘80s, of course, but for the most part he sang standards with an orchestra. A great singer, a stupendous singer. 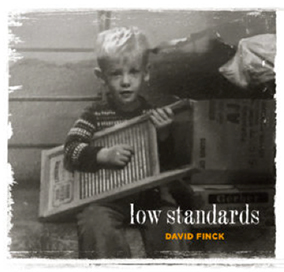 To bring this full circle, let’s chat about your new record, Low Standards. Gary Versace [a pianist who recently joined the Eastman jazz faculty] is on the album along with Joe Locke, and you even sing on this one!

This was my second project for Soundbrush Records, and I knew I wanted to call it Low Standards. Of course as a bass player, that title’s a little tongue-in-cheek. I had selected the material, and I decided I would write a song called “Low Standards,” written in a humorous way full of musical references, and bass references. As I was writing it, I thought “Okay, who will sing this?” and it made sense for me to sing it. I don’t claim to be a great singer, but I think I communicate the idea of the song well enough, and I had a lot of fun with it. For the other more serious material on the CD, there are two other vocal cuts, and I had professional singers for those.