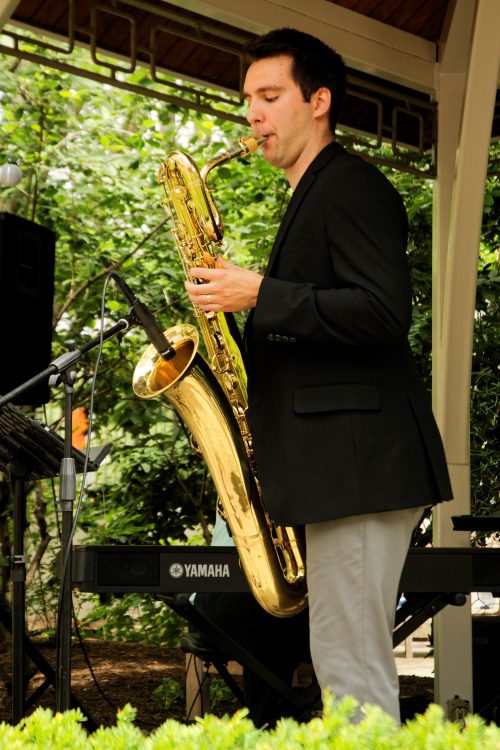 Karl Stabnau graduated from Eastman (BM ’11); MM in Music Education with jazz emphasis in December 2013. Among many other things, he is currently the Jazz Director at SUNY Brockport and the college’s music business coordinator. Instead of playing as a leader at the XRIJF, Karl was involved more behind the scenes. He worked with the Festival to bring in a younger audience, especially by introducing the wildly fun and successful weekend jam session, “Soul’d Out”, at the jam’s new location, the Radisson Hotel Rochester Riverside. In addition to working during the Festival – everyone could see him running around in official XRIJF attire – doing whatever needed to be done, Karl also led an exceptional group of Brockport interns to help manage the stages at the Festival’s many venues. We caught up with Karl to chat about him, his music promotion business, the XRIJF, and “Soul’d Out.”

How much playing/ writing are you doing compared to the last time you’ve talked with us?

That’s a good question. I’m teaching at Brockport and Hobart right now, so I keep up my sax playing, I get time to practice a couple nights a week, and I’ll sit down at the piano and do some writing. I’m much more selective about the gigs I take now, because I don’t need to play everything to make a living anymore. I can play the stuff I want to play, I can book gigs to places I want to go, which is nice.

How much are you playing as a leader versus a sideman?

Leader gigs are only about three or four times a year, but I try to make those special.

Like your Charlie Brown Christmas? (Erik puts on an annual holiday concert of music from the classic Peanuts television special.)

Exactly. As I’m doing more things, and getting involved more in the business/ promotion/ marketing side of music, I’m learning that a lot of artists do themselves a disservice by playing every single week, because they’re giving their stuff away for free. If you can make what you do more special as you do it, along with building appearances with other groups, it’s a good medium.

Speaking to the music business side, how is Sonic Era LLC doing, and how much of what you’re currently doing is through that?

Sonic Era started out when I finished my music business degree at Syracuse University – a master’s program – because I needed an entity to deal with the minefield that is legal negotiation in the music industry. My original concept was that I would use it to be a booking agency, which we still do – I went and interned with a company in Massachusetts for a while – so I came back and used that experience for booking my own things. Then artists wanted to book tours, they could come to us, and we had contacts for all the people they needed.

Since then, it’s expanded through contacts around town; we do a lot of private event and weddings booking. It’s a private event division, which has grown a lot this past year. It started drawing groups at Eastman – whether they were jazz, classical, or folk groups – into people in a wedding coming to us asking for special guest talent. We do talent buying for weddings, bringing in people from New York or Los Angeles.

I was sitting down and talking with Derrick Lucas from Jazz90.1, probably ten months ago, and he was saying that he gets calls from artists all the time, doing promotion, and asked me if I did any of this stuff. I had done it for my groups; I had done it for friends at Eastman. So I saw an emerging market there, and if I wasn’t busy enough already, we do promotion for that too. If they need website help, if they design and concept help, strategic marketing plans, any kind of promotional material, long bios, short bios…

So it sounds like Sonic Era has almost become an “a la carte” service.

Exactly. Because, someone isn’t going to find a manager that will take on a small client – because the client doesn’t make enough money – but if you need someone to look over your shoulder to ask, “Does this work? Do I like this? Is this heading in the right direction?” Maybe you’re having trouble with the bio. Whatever it might be, they can call up, and we’ll do a small fee for that.

Normally in the industry a manager will get ten to fifteen percent, and when an artist is hoping to book shows, no one invests in that. There aren’t really large management agencies that do a la carte, but if you ask them, it’s hundreds.

You said “we.” Who else works with you?

My brother, Erik, worked with me, but I use a collective “we” because we’re in a transition point. He’s on the road with the Glenn Miller Orchestra. But I use the “we,” even though it’s pretty much all me right now.

Is Sonic Era how you connected with the XRIJF?

Yes and no. The Jazz Fest didn’t come from Sonic Era, but I’ve known Marc Iacona for a long time, and we sat down together after the festival last summer, and we talked about the dynamic that’s around. I think jazz is a very interesting music for a lot of people, but if you’re under 30, 25, 20, the word “jazz” has a different connotation.

Straight ahead – which is what a lot of people associate with “jazz” – I don’t want to say that it’s not “accessible,” but I don’t think it’s something that a lot of people spend money for or participate in, unless you have an “in.”

Yes, and for those who don’t take a literal connotation, jazz can be smooth jazz on the radio, funk, R&B: it’s “jazzy”.

I was talking with (Marc) after the festival, I thought it would be nice to have more young people buying club passes, going to shows, and participating in this. And the question was, “How do we make this happen?”… To make a place that is accessible, to give them an entry point into it.

If you listen to a lot of these artists on YouTube – because I love jazz, you love jazz – someone who listens to jazz will probably say to himself or herself that it isn’t their thing. And that doesn’t mean that there isn’t amazing music happening here, especially since taking in music live is a very different experience from a recording. You have to provide that entry point, like this year’s “Soul’d Out” jam sessions.

And if we can get artists to talk about their experiences to the festival, we can gauge that as an entry to better attract the younger audience.