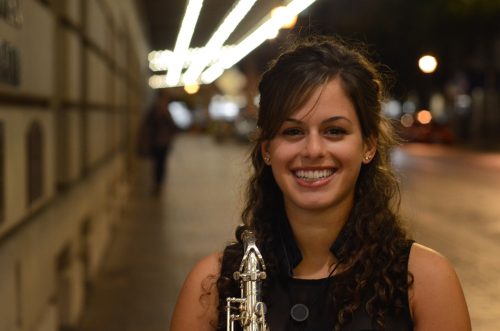 The Xerox Rochester International Jazz Festival (XRIJF) ran from June 23 through July 1. Along with musicians from all over the world, Eastman jazz players and composers – faculty members, students, and alumni – contributed the festival. Freelancer Dan Gross has interviewed some of them for Eastman Journal during the the festival. He continues his series with saxophonist Alexa Tarantino (BA, Jazz Sax Performance, Education, 2014).

I’m from West Hartford, Connecticut, and I ended up there coincidentally; it was unbeknownst to my family that West Hartford had an awesome public music department at my school. Growing up I had great educators, and role models and mentors. Once I got serious, that was incredibly helpful, and the whole community was very supportive of the arts, but particularly jazz, and so we had a ton of guest artists flying in all the time, and we were always working on or going to competition, or something.

I caught the bug from there, and I would have to say that some of my early influences were obviously Charlie Parker, Phil Woods – he was probably my number one guy for quite some time, and still is – Dexter Gordon… It all came to be from West Hartford, and I’m grateful for that.

Do you come from a musical family?

I don’t; my parents are not musicians, and I’m the only one in my immediate family that’s in the arts, but my dad’s mother apparently was a pianist and I guess she used to play on the radio during the Great Depression. That’s kind of cool!

You mentioned “you got serious” in high school.

Oh yeah, definitely. I would say that I was really serious about it. Well, honestly, I think I always knew that music is what I wanted to do because there wasn’t anything else I liked as much. I never really considered doing anything else, and probably in eighth grade going into ninth grade, I upped the number of private lessons I was taking, I started going to summer programs, and it became what I was doing for fun, and my friends started to become people that had the same interests. As I got later into high school, there’s was no question about it. I was doing music.

Was one of those summer camps Eastman’s, by any chance?

Actually, no! I think I had heard about it, but because I was in Connecticut I ended up going to the Litchfield Camp, and then I also attended the Skidmore Jazz Institute in Saratoga Springs, and those were at the recommendation of my teachers.

I remember I met Erik Stabnau – a fellow Eastman alumnus – we were at Eastman at the same time for our undergrad, but we actually met at the Skidmore Jazz Institute, and I remember him saying that he had attended the Eastman jazz camp, and I said “What, how did I miss that?! I wish I had done that!”

So was that your first exposure to Eastman, meeting Erik?

I don’t think we discussed it too much at that point, but my summers were such that I didn’t have time to audition for that camp. But when it was time to pick schools, and when it came time to apply for schools, Eastman was on my radar because I guess my impression of it was that it was a serious, prestigious, conservatory that I honestly wasn’t sure that I would get into. And it was a bit farther away from home, it wasn’t a New York City school, and for some people that can be a drawback, but for me I was curious, because I wasn’t sure I wanted to move to NYC right away. That was a bonus for me.

What are some things you learned at Eastman that still stick with you to this day?

Honestly, Eastman was the best time of my life. I look back on it so fondly, and I’m so grateful that I chose that school; I don’t even like to think about what might or might not have happened if I had gone somewhere else. I feel it all just was it meant to be, and it worked out so beautifully.

There are a lot of things that stick out to me. One, which isn’t a musical thing, but perhaps more important, is that the community that Eastman had and created, and presented to its students was so amazing; it was so supportive and nurturing. It wasn’t cutthroat, it wasn’t competitive, it was just a bunch of people wanting to learn. It became a family. I was grateful to be involved in any departments and offices, so I got to know staff and faculty well, and those people are still amazing role models and mentors. The way I was taught to conduct myself as a professional, and as a musician; it was to be respectful, and to appreciate a different opinion or perspective. Never discount the little things, and making sure that I’m at the top of my game at all times, but remembering to be humble and to appreciate the opportunities you’re given.

Jeff Campbell, Dariusz Terefenko, Harold Danko, Charles Pillow, Dave Rivello, all of the faculty members helped create musicians that eager and willing to learn, and when they get out, they have an excellent understanding of how to present themselves.

Can you tell us about the DIVA Jazz Orchestra, an all-female jazz orchestra, and how you became involved with them?

I met Sherrie Maricle (drummer and leader of the orchestra) in high school. My private teacher at the time knew her pretty well, and when I was getting serious, and wanting to go to New York to see concerts, my teacher connected me with her. It’s a full-circle situation in this too:

The lead alto player at the time was this woman named Erica von Kleist, who went to my high school, and she was my inspiration. She was the first female I saw play the saxophone, and she was finishing up her time in West Hartford when I was really young, when I was first deciding to pick up the saxophone. We have connected and stayed in touch; she was an incredible first inspiration for me, and she’s still a great mentor.

She was with DIVA, and then when she moved on, it was about the same time I left Rochester… Basically as soon as I packed up and moved, I got a perfectly timed call from Sherrie, asking, “Can you do this one-time gig?” I guess it was sort of an audition, looking back. She knew me, my teachers, and where I had come from.

I did that gig, driving all the way to Pennsylvania from Rochester by myself, late night, did it, preparing and memorizing as much as I could, like I knew what “the test” was going to be… It was great, and she offered me a show that she was doing with singer and tap dancer Maurice Hines. He has a show called “Tappin’ Through Life,” and I did that for about a couple of years, on and off… even a one-off at Jazz at Lincoln Center.

Finally (Sherrie) said, “You’re in now.” I guess joining was a bit of a process. It’s been great to be with them and to be their lead alto player.

I believe that’s where you met baritone saxophonist Lauren Sevian, with whom you co-lead LSAT, your bebop group that just laid down a killer performance the night before this interview, that featured fellow Eastman alumni and faculty members! Can you talk about your and Lauren’s personal and musical relationship and chemistry?

We did meet through Sherrie and “Tappin’ Through Life,” though Lauren just reminded me that we really first met about ten years ago when I was at a jazz camp in Connecticut, and she was on the faculty there. I remember back then being inspired at seeing another great female player, and it wasn’t until we were reconnected through Sherrie that we played in a small sax section together – it was us and Roxy Coss on the tenor – and we all just clicked. We all became best friends because we were spending so much time together, which can be good or bad, but it was so good for us.
But Lauren and I had that history from Litchfield and a lot of mutual friends from that time. We spent a lot of time talking about our musical tastes – what we like and what we love, namely playing hard bop and bebop – and we wanted to start a group together, and her husband put it together that our initials formed “LSAT.” So that’s it, here we are!

Can you tell us about the LSAT gig, and your thoughts coming back and playing the XRIJF, for the first time as a leader?

I was totally blown away, especially after the first set. I was completely honored that Harold, Jeff, and Aaron Staebell (see “Eastman at the Jazz Festival 1”) took part. But especially for Harold and Jeff; I couldn’t have asked for a more supportive education from them, and it continued up until last night. They were so cool and great, and it was amazing to watch them play their solos in front of me, and sharing the bandstand with them was great.

For Aaron to be there was really special, because even though we weren’t (at Eastman) at the same time, we connected during my time there and we did a couple projects of his together, and I thought he would be a great fit. It was a nice moment, and especially in the first set I had a lot of friends from the music education departments, and my teachers. It was a nice homecoming moment.