“A game I played with the guitar”: Juan Trigos Composes for an Eastman Alumnus 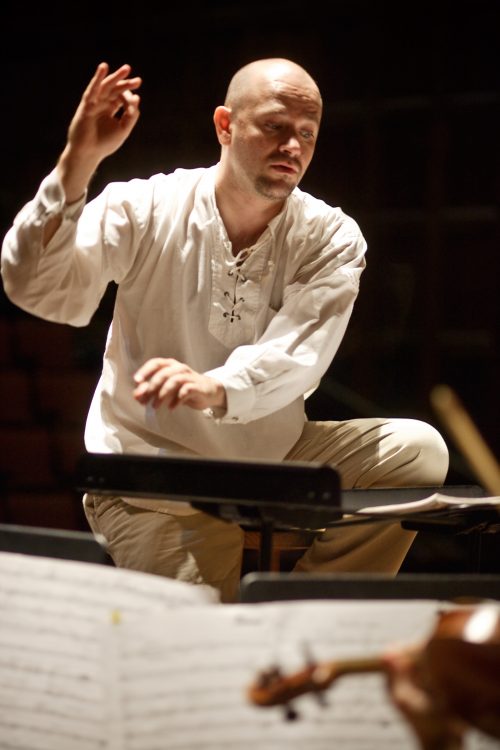 Mexican composer and conductor Juan Trigos was in residence as Eastman’s Howard Hanson Visiting Professor from April 2 to April 8. His music, including the world premiere of his String Quartet No. 2 with Italian soprano Danilla D’Ingulfo, was featured in two recitals, and Trigos also conducted, led a master class, gave composition lessons, and spoke at a symposium.

Trigos gave us a breakdown of how he worked on these pieces, and how he adapted his “Abstract Folklore” style for the guitar.

Let’s start with the Partita.

I am not a guitar player, that’s the first important thing to know. But I do love guitar, so I play in a very rudimentary way, just some chords. So if you need me to play a D-diminished chord, I would have to think about it. I often compose with a guitar at my side, so my first need is to corroborate anything I write on the guitar. If I can play something, for sure Dieter can.

Most important, you need to understand how the instrument works. It goes to the strings – you don’t have a bow, but you have four fingers on the left hand, and five fingers on the right hand, so you can make chords in the strings, but you can also divide it: it’s closed, but it’s not. The harmonics and the bass part are also very important to understand in the way you treat the guitar.

The Partita starts like a chorale, because my specialty isn’t in solo pieces, it’s in strings; most of my music is for strings and a large orchestra. I started playing and writing this piece, and after a while it became a 24-minute piece, probably because of the form and because I’m used to doing bigger pieces! It was a game I was playing with the guitar. It became forty pages … not exactly of “music” yet, but it was a lot of material.

The idea of the partita is the allusion to the suite, and to the dance, so you still feel it. There are five movements, and each movement is a different dance, very abstract of course. 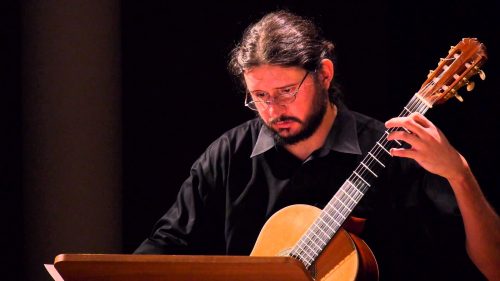 “If I can play something, for sure Dieter can”: Trigos has written two large-scale guitar works for alumnus Dieter Hennings.

What can you tell us about your Twelve Variations and Fugue on the “Folia de España”?

That’s a completely different approach to the instrument. Some people say I’m very quick – I write very fast. Well, I don’t agree. But in Variations, I took a long time to do that, especially the last piece, the fugue.

It was very hard to transcribe that into the guitar. I will pick the fugue as an example. I rewrote it three times, or even four times, because it didn’t work in the guitar. The first fugue sounded fantastic, it sounded very classical, but it’s for piano, you know? My second version was a little closer to the idiomatic styles of the guitar, but it wasn’t done yet. But for the third version, I rewrote the voicing, because it didn’t work at all for the guitar. So practically I needed to do it all over again, because changing the voicing in counterpoint is a mess. It’s not just a matter of changing it one octave, things like that; you need to change the voice-leading, which is very difficult, let me tell you.

Basically, if I spent three minutes writing, I would then spend six minutes playing every voice to make it work well on the guitar, and of course without losing the integrity of all of the elements, especially the counter-subject of the fugue. This was special because [this piece is] an homage to the “semi-god”, if you want to call him that. Johann Sebastian is watching over; you can’t write a fugue without thinking of him.