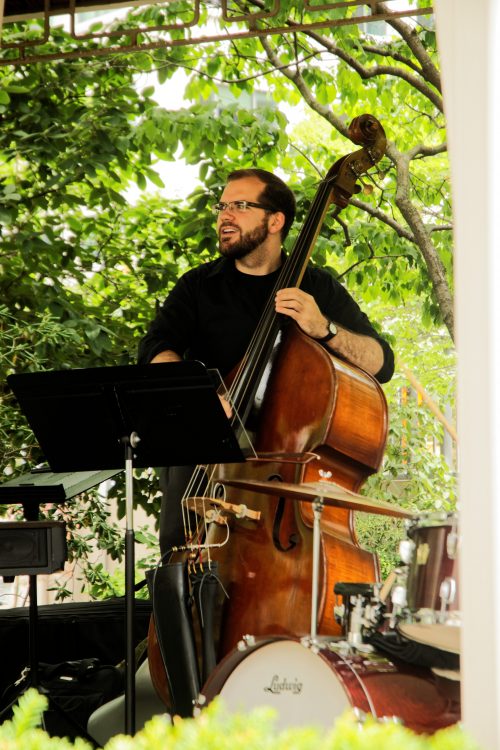 Eastman graduate (2012) Danny Ziemann is a rising star bassist, teacher at the Eastman Community School and at SUNY Oswego, and author of The Low Down: A Guide to Creating Jazz Bass Lines. Danny is playing with the Vince Ercolamento Quintet tonight, Monday, June 26, at 6 and 10 p.m. in the Wilder Room. We caught up with him discussing his International Society of Bassists experience, and why he’s leaving Rochester in the fall.

Tell us about your International Society of Bassists Conference experience [held in June 2017 in Ithaca, New York], besides the competition; we’ll get to that later. You gave a talk called “Encouraging Dialogue in Bass Pedagogy,” correct?

It was a part of two officially scheduled talks. The first was my own presentation, which was on encouraging dialogue in bass pedagogy. It was pretty well-attended.

I took a research class this past semester, and I used that to learn more about what research is available for bass. I was trying to encourage people to talk about what’s important to them in teaching, to get them to consider different ideas, and to have some framework and dialogue established. It was really interesting to see how people were passionately connected on certain things, and other people were for other ideas, more disconnected. It’s cool to hear it from other people.

Education is becoming more standardized, especially in jazz. We don’t always have these opportunities for dialogue, or if there are some, they’re limited to conventions. It was fun for me; a social experience of sorts.

What was the other talk?

Kristen Korb, the past president of the ISB, hosted a panel, discussing how to establish a freelance career. It had myself, Mike Forfia, Sam Suggs – who won the Classical Solo competition last convention – Mimi Jones, and Adam Kubota, the bassist for Postmodern Jukebox. It was the five of us, we discussed not being afraid of taking on new opportunities, understanding that we’re figuring it out as we go along, and the trajectory is only made clear after you’ve already gone through. You can only contextualize what’s happened after it’s happened. That was a big distinction.

For someone who’s not a bassist, it might be hard to envision all these bassists getting together. What was your overall impression, and what were some of the things you did that are common amongst convention-goers?

I checked out a lot of the bass luthiers. I need to get some work done on my bass, so I made sure to go around to everybody about converting my bass into a travel bass. One of the big things is meeting those instrument builders, the luthiers.

I didn’t get to hear too much in terms of presentations, but I heard a lot of people perform. I got to see Francois Rabbath perform, and I’ve never heard him play; I got to hear Gary Karr, too. He gave a really epic speech. It was so moving.

Yes, he talked about the history of the bass, and some of it was very shocking; how segregated the community was about how the bass wasn’t the “mutt” instrument anymore. There’s a lack of understanding about what we do (as bass players), there’s a lack of awareness… And even in our own community, there are some divides. Some say: “Oh, you’re a soloist, you’re not a ‘bass’ player, you’re something different.”

(Karr) told us that when he taught at Juilliard, the bass section was not in the strings department; it was in the winds, brass, and percussion department… Stuff that’s bizarre to us now, but back then, 50 years ago when the ISB was first getting started, that’s what we faced.

You placed second for the second convention in row in the Jazz Competition! Your first second placement was in Fort Collins in Colorado. Tell us about the competition itself, your prep, and your thoughts and feelings on it on the whole.

Initially, before the audition, you submit an application and resume, and you submit five tunes that are selected from certain categories. You get a blues tune, a ballad, a straight-eight Latin tune, something uptempo, and then a free choice.

Within that, I picked tunes that I like to play, and I hired some of my favorite musicians, and we did a session. I submitted that, and got accepted.

To prep for the competition, you get a 45-minute rehearsal with a rhythm section that’s already picked for you – a piano player and a drummer – and everyone gets the same rhythm section, everyone rehearses the day before. In the competition, you play thirty minutes of music, usually within those categories. That’s what you have to do that’s the process. It levels the playing field, because everyone gets the same opportunity.

The judges get a score sheet, and everyone draws numbers in the beginning. I was the last person to compete. They tally up the scores and compare them. It’s very quantitative, and whoever has the highest score wins. 34 people applied, and then eight people ended up competing. That’s the logistics of it.
I tried not to treat it like anything other than a jazz gig or another opportunity to play. I knew if I started to psych myself out, it wouldn’t be sincere. There’s no way to know what the judges want, as everyone likes different things. Even in the scorecards, some said: “Hey, I love the way you did this,” while others suggested I change the same thing. Everyone has a bias, and it either works in your favor or it doesn’t.

I picked tunes that I knew represented some diversity, so there was some strategy involved. But from the moment you step on stage, and how you interact with the people, and what tunes you choose and what order you play them; all that stuff represents what you do, in addition to how you actually play. I always try to smile, I’m going to try to have my band play well and have good interactions, and put on a good musical experience.

In that moment, I was really humbled, and thankful for the opportunity to participate, and I’m really honored to take second.

With whom are you playing for this year’s XRIJF?

Vince Ercolamento. I’ve actually played with these guys in different contexts combinations before. It’s all Vince’s original tunes, he’s a great tenor player, and he’s playing some alto too. It’ll be fun. It’s a good vibe, and great guys to play with.

Last year at the Fest was great because I played a lot, and for all these people coming and seeing these groups, many are probably not intimately connected with the music. There’s so many great opportunities to hear music at the festival, and the idea is to catch a lot of new artists and promote diversity.

For me, all these people from Rochester are there, and they say: “Oh, I don’t know these guys, but I know that guy.” That feels cool that there’s a connection to the hometown. It feels good to be a part of it, especially that this thing happens on a global level, and you can cultivate friendships with the artists.

Gwilym Simcock is a killer piano player, and I actually met him three years ago at the Festival, and he’s actually one of the professors for the Focusyear program, and he tours with Pat Metheny. He sent me a text, asking if I wanted to hang. It’s great that I can have these interactions.

It’s sad news to report, but you will be leaving Rochester for a whole year to study overseas with the Focusyear program you mentioned. Can you us tell us about the program you were accepted into?

It is an artist diploma program that’s modeled after the Thelonious Monk Institute, or the Juilliard program. It’s eight musicians and one full-time sound engineer. We take residence at the music school for jazz in Basel, Switzerland. We rehearse every week, shedding our stuff, taking lessons, and every other week an international artist comes in and works with the band; Joshua Redman, Gwilym Simcock, Steve Swallow. All these really amazing people, and we do that for a full year. We play the school’s jazz club, we make a record, we do a full tour of Europe in April, and I think we’re playing festivals in the summertime. Plus it’s all fully-funded. 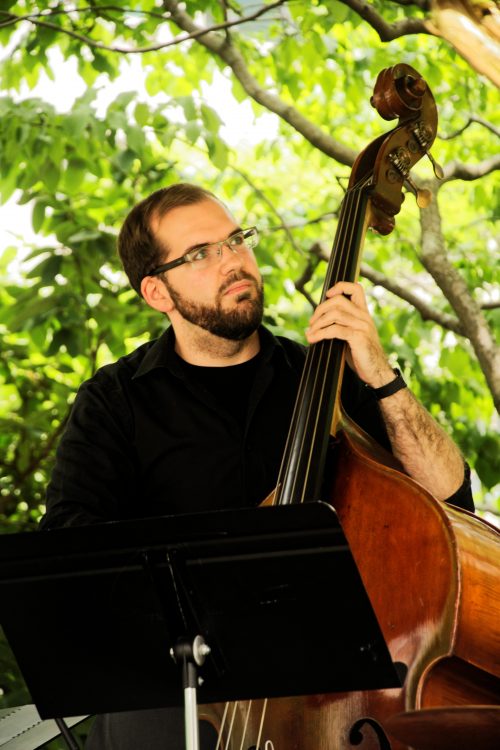