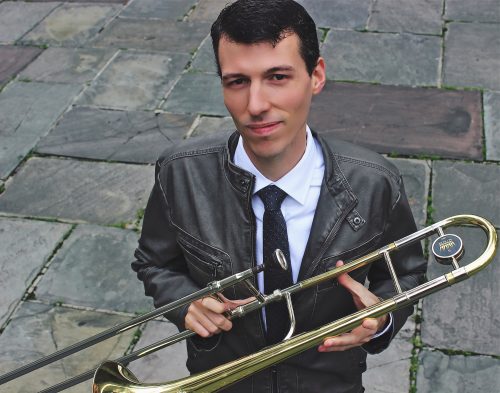 An award-winning composer, arranger, and trombonist, Eastman alumnus Nick Finzer is bringing the joy and power of Jazz to both traditional fans and the most modern 21st century audiences. He’s on a mission to be a passionate voice defining the sound of Jazz in this age while also bringing street cred to the trombone with a bold, tight sound. Nick is back in Rochester to play tonight with Postmodern Jukebox, YouTube’s most popular jazz group, taking modern hits and playing them in a variety of jazz styles.

Tell us about your early life and early experiences in music.

I grew up in Rochester, I went to Hilton High School, and I studied music at Eastman when I was in tenth grade, with the new year-round jazz orchestra that they started. I also did the Eastman summer camp. I had always intended to be a classical trombonist, but in this group we played the music of Duke Ellington. That turned me onto jazz.

I ended up going to Eastman, but I also had always wanted to get into Juilliard, so I made it a goal of mine to do that. Luckily it all worked out!

Was trombone your first instrument? You’re a tall guy; I was thinking they just put you at trombone so you can reach sixth position right away!

I used to sing a little bit when I was a little kid, but trombone was my first instrument in fourth grade. I wanted to play the drums or the trumpet, but they said, “You have long arms, you’ll play the trombone.”

So you wanted to play the “cool kid” instruments, and they stuck you with trombone! Eventually, you went into jazz, but you wanted to start in classical. Did your parents play?

No, my parents aren’t (jazz) musicians, but my mom plays the flute. She didn’t major in music, but she always kept playing, especially after I started playing. There was no particular music around the house, I was really getting jazz through the jazz orchestra and the Duke Ellington music. I hadn’t really known that music existed.

A teacher in eighth grade pushed me in that direction, and I ended up doing the All-State stuff and learning the rep that goes along with that. I also started checking out brass music, and playing that repertoire for a while.

What drew you to Eastman? Did you have it mind when you were at the Community School?

The first year that I joined the Eastman Jazz Orchestra we participated in the “Essentially Ellington” festival at Jazz at Lincoln Center, and that’s what turned me on to jazz. I thought “Oh wow, this is what being a jazz musician is like, it’s pretty cool!” Being in New York was eye-opening too. I had my sights set on going to New York, and at the time I used to drive down for lessons with a great trombone player named Wycliffe Gordon. He was teaching at Juilliard, and I really wanted to go there, but it didn’t work out.

Looking back, it was a good thing that I didn’t try to go to the City then. I wasn’t ready musically, I wasn’t on the level I needed to be at that time. Some other schools in New York let me in, but didn’t offer very good scholarships.

I knew what I was going to get at Eastman. I had started with Mark Kellogg already, and the scholarship was good. It was the right choice. They set you up so that you can succeed in all kinds of musical settings.

Is there any one really important thing that you learned at Eastman that has stuck with you?

Being in Rochester, in a place where you have to create your own opportunities a lot of the time, forced me to get a lot of things happening, and I learned a lot about the non-performance aspects of making a career. It forced me to think about avenues not just for performing, but for performing and connecting with students.

I met a lot of people that I still see. Moving to a new place, the Eastman network is already super-strong, and sympathetic to each other. That’s a great thing to have in your back pocket; everyone is going to be supportive of you as the new person in town.

Speaking of teaching, how much teaching versus performing are you doing these days?

For the 2014-2015 and 2015-2016 school years I was teaching full-time at Florida State University. I was there two and a half days a week, commuting from NYC. I was teaching a lot in those years.

I still have students that I teach every week, and an online course based on this book I wrote a couple years ago (Get Ahead!) that’s jazz trombone-specific.

Whenever I set up tours for myself there are a lot of master classes involved, and stopping at colleges and music stores. My educational side and my musical side are always intertwined.

Tell us about your experience as leader and trombonist. It seems there are fewer and fewer trombonist bandleaders.

Yeah, it’s plagued our instrument for a long time. Even my teachers have confessed that they sometimes struggle as lead players, getting music together. That said, there’s no shortage of young trombonists who are making really interesting music … Whether or not people see it is another story.

It’s definitely a struggle, convincing people that the trombone is just as valid a lead instrument as trumpet or saxophone. The trombone isn’t always a loud, raucous, New Orleans-style “greasy” thing. There’s way more to the instrument, and people don’t know that’s a possibility. I even get musicians who come up to me and say “I didn’t know a trombone could do that,” or “I didn’t know the trombone didn’t just do ‘this’” – meaning gutbucket, bluesy jazz.

If you go back to the early days of jazz, Tommy Dorsey was a huge star; he played trombone and led his band. Glenn Miller was a trombone player. Trombone players were big stars, and it’s been put aside. But now there are a lot of people doing great things, so I think it’s coming back around.

On the topic of trombonists doing great things, I have had the pleasure of listening to your new album, Hear and Now. Can you tell us about it?

It’s my third big release; it came out in February 2017, we recorded it in June 2016. I was moving towards first having a concept about a song – a story in my mind about what it might be like – and trying to write from that perspective. Sometimes, we write from different starting or inspiration points.

In 2016, I wanted to write some music that dealt with current events, and reflects the craziness of everything. That was even before the election. I had an uneasy feeling about where we were headed, but I also wanted to share music that was important to my life in music, like Duke Ellington’s “Single Petal of a Rose”.

That was some music that I loved, and my producer, Ryan Truesdale, encouraged me to think of different ways to [approach the music]. He would say: “Throw this arrangement away, and start over. What if you couldn’t do what you just did, and you had to think of another way to do it?”

Yeah, he really helped me think harder and not go the obvious route. I had never done any overdubbing or anything like that, but on “Single Petal,” there are three trombone parts and two bass clarinet parts, and we had to overdub a bunch of stuff, just to make that arrangement work.

Then the record came out after the election, and everything [on it] became even more poignant to me. It was something that I felt passionate about, and wanted to keep on talking about.

Can you tell us about playing with Postmodern Jukebox?

Yeah, I’ve been playing with the band with a friend of mine –we were in the Eastman Youth Jazz Orchestra; he’s a couple years older than me – Mike Cottone, who’s the trumpet player. (See the previous Eastman Journal post.) Mike got me involved in this project in 2012, before it was a really “a thing.” We just got together and played some music, and now it’s blown up to be a large thing.

What are some thoughts you’re having playing in Kodak Hall, in your hometown?

I’ve played in it a few times on and off since I left town, but it’ll be fun to be back. When you grow up in a town, people forget that you’ve left! It’ll be nice to come back in that role, and to come back and hang out. It’s great to see friends who are also playing at the Jazz Festival.