Mastering Music for the Media: An Interview with Beal Institute Director Mark Watters 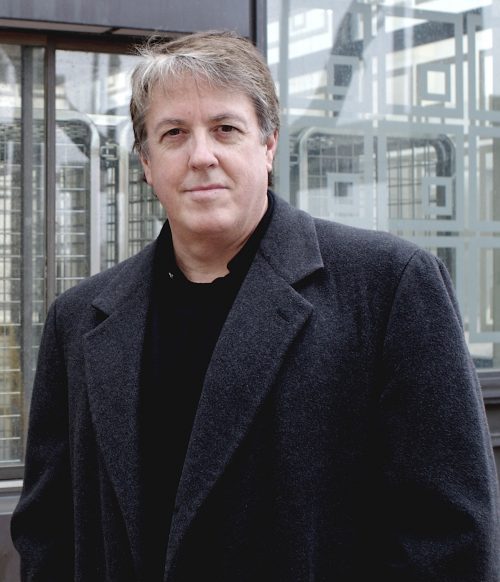 Mark Watters is joining Eastman to lead the new Beal Institute for Film Music and Contemporary Media. Watters is a six-time Emmy Award winning composer, conductor and arranger. Mark served as the music director of the Centennial Olympics in 1996, and the Salt Lake City Olympics in 2002. Watters has served as guest conductor for ensembles such as The Los Angeles Philharmonic, London Symphony, Detroit Symphony, Dallas Symphony and Atlanta Symphony. He has also composed and conducted music for television, movies, and film.

Tell us about your early years in music, and your education.

I was raised in Irving, Texas, which is a suburb of Dallas, and I was fortunate to grow up in an environment that had a great public school music program. I played saxophone, particularly baritone saxophone, and guitar. I had some great teachers that supported my curiosity and love for music, and I had great parents who did the same.

I then attended USC, where I was intending to be a band director. I went back to Texas, and I did exactly what I had learned from my band directors in my early days, and I realized within a week of student teaching that public school music teaching was not what I thought it was.

It’s interesting, the USC had a relationship with a school in Watts, and it was an inner-city school that had all the problems that city schools have, but the teacher there had these kids loving music, and he was so inspiring that he graduated ten or twelve music scholarship students a year, in spite of the bad instruments, conditions, and equipment. I realized that my dedication to that would not be what his was.
It seems so obvious now, but at the time I didn’t realize it, that teaching music on that level, and making music are two different things. Music is a great tool to teach discipline, teamwork, setting goals, working together; some people respond to athletics, some people will respond to theater, and some people will respond to music. These are things that are crucial to our society, because they’re not taught in an English class, or a science class, or a math class, and that’s what the inspiration should be for someone who wants to be a music teacher.

I realized I wanted to be a musician; I wanted to play, and I wanted to work on a professional level. So I basically starved for a few years, as most musicians do, and then took a course at the UCLA Extension, an evening/adult program, and was fortunate enough to study with a man named Don Ray, who was a music supervisor at CBS. He took me under his wing, and I fell in love with the idea of writing music for TV and film, and the idea of telling a story with music. One thing led to another, I managed to get some work, and build a career.

What did you learn on the job versus learning in school?

You know, you take theory, you take counterpoint, you take orchestration, and the idea of applying it to your own music is really challenging. My apprentice period was probably longer than those who had studied composition and arranging at school; I didn’t have those skills. I had to take jobs that didn’t pay much of anything, and just learned as I went along:learning the techniques of how to teach yourself, and how to study scores, how to properly listen, writing questions to ask other experienced orchestrators and composers. These are all things that you develop as you get older.

Are those some of the skills you’re trying to bring in to your new position at the Beal Institute?

Absolutely. This is going to be run based on my experience as a working professional. There will be strict deadlines, there will be short writing schedules. In this business, you can’t gaze at the moon and wait for some inspiration to come to you. They need a theme at three o’clock, and it’s noon. So, you got to get to it and make it brilliant.

I want to instill a sense of camaraderie, which actually is a big part of the Eastman School of Music; it is a thread that runs through all the departments. There’s plenty of time to be highly competitive when you get out in the professional world. It’s going to be a very small class, at most, twelve students.

Everybody that’s going to be here is going to be talented and worthy of being here. I think it’s important to instill a sense of sharing and camaraderie.

The alumni connection is amazing too.

There are so many alumni from Eastman working in the TV and film business in Los Angeles. Not just players, but there are several composers – Jeff Beal, obviously, is the one that comes to mind – Joe McNeeley, Steve Bramson, Michael Isaacson … They still carry a great love for the school and want to be involved in helping the students.

Eastman also has an interesting connection to the film and contemporary fields in Ray Wright. When he was here, he did so much to connect students to other students from RIT and filmmakers; our own Dave Rivello talks about this all time.

If you talk to anybody, like those people I just mentioned, Ray Wright is spoken of with such great affection and in the highest regard. It points out a very important thing that is unique about what this program is going to do.

USC has a great music school;some of the greatest teachers and some of the greatest musicians have come from there. They also have a great film school, where George Lucas came out of, Francis Ford Coppola; the two (schools) had nothing to do with each other. There was this sense of “we don’t need you, and we don’t care about you.” The idea of film music was looked down upon, there was one token film music class when I was there, really an elective. You’d go by the composition department, and there would be notices out on the bulletin board: “Composer needed for student film.”

I remember going to hear Bill Conti speak; now Bill Conti won the Academy Award for The Right Stuff and he also wrote Rocky. Terrific composer and great guy. I remember him saying on this panel, early in my career: “The year I did Rocky I did two USC films and an AFI film.” And that just blew me away, that the whole music school and this great film school never had anything to do with each other.

We know it will be a success, but there are always challenges when starting something like this that musicians look forward to. Are there any challenges you’re looking forward to?

As soon as I leave [this interview], I go to a meeting to discuss where my studio is going to be, and I cannot wait to see (it), and I can’t wait to get in the space and put in the equipment in there and tinker around.

Any profession in music is difficult; if we were logical, none of us would choose to be in music. We’d go into some course of business…

We’d all be doctors, lawyers, and businessmen.

Yes, everything our parents wanted us to be. “Something to fall back on,” like medicine. But we didn’t choose that. I’ve been asked this: “My child wants to go into music, and I don’t know if I should tell them to go into it or not.”

And I have a common answer: “If the person cannot imagine doing anything else, then (they) should stay with music.” It’s not about if you’re good enough or talented enough, it’s that you can’t envision doing anything else … And every musician, I don’t care who they are, has had points in their career or when they’re growing up, that they’ve doubted whether or not they should be a musician. Everybody has. I certainly have, and it comes back to, “What else would I do?” The thought of doing something else other than music, in spite of the frustrations and the highs and lows that come with it … I can’t imagine doing anything else.

To that end, you want your students to come out of your program energized. Beyond the technical skills, what other skills will students have when they leave?

Media composition is about telling a story. The great Jerry Goldsmith, legendary composer, said: “I’m not a composer, I’m a storyteller.” And that’s the part that has always fascinated me; notes vibrate together and make an emotional response, and you change one note and the storytelling completely changes. That’s the essence of what we do.

Technology is all about serving us, and it’s a big part of the business, much more so than when Jerry Goldsmith started, or when the great composers we’re doing it. All they had to do was write music with a pen, paper, and an eraser. Nowadays, composers are asked to produce their own demos, mix them, do your own copying … It’s very much a technical profession. But it’s important to always remember that the technology serves you, not the other way around. You shouldn’t be chasing technology and chasing the greatest newest thing. Find what works for you, and then master that. 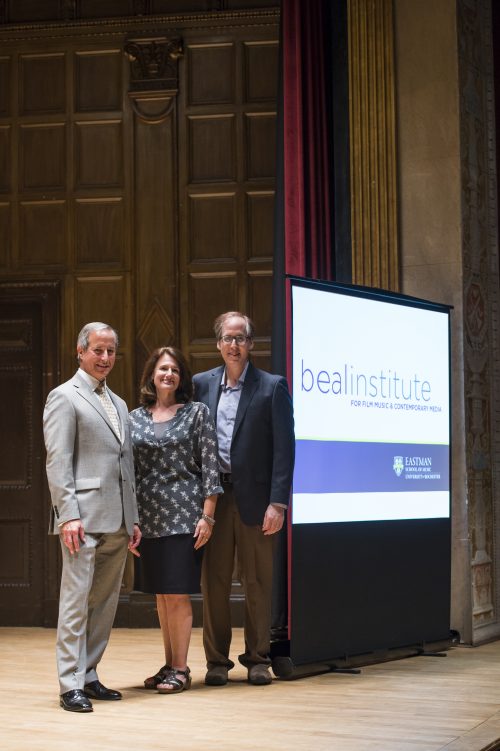 Eastman Dean Jamal Rossi with Jeff and Joan Beal at the announcement of the Beal Institute in September 2015.

For our final question, we’ll circle back around. You mentioned Jeff Beal. Can you tell us about your relationship with him, and how he will be involved with this curriculum?

Jeff is one of the most respected and highly regarded composers in the business. I first met his wife, Joan, who’s also a graduate of Eastman, (when) she sang on some of my projects in LA. Beautiful singer, great artist. I heard about Jeff, but this was before Jeff’s career really blossomed. I heard he was a fantastic composer, great guy, and then his career started blossoming, and I started hearing scores of his.

There’s a lot of craft in our business, not as much art as I wish there was, and it’s not because there’s not the talent to do it, it’s because so many times composers are asked to mimic scores. They’ll cut pieces up … and the people are afraid to venture beyond that. If the directors have gotten used to hear the score … It’s difficult to be daring and new.

Every once in a while, composers break through that and write in a language that’s uniquely theirs. I can hear Jeff’s music, and within thirty seconds, know that’s Jeff. And that’s rare in our business.

Of course, House of Cards has become such a hit for him, but Pollock is really a brilliant score. He’s written so many great (pieces); he can write comedy, he can write action, and he can write drama … His vocabulary is huge, he has a great command of the technology, he embraces it well … And he’s also a great person, a man of not only great skill, but also a man of great ethics, camaraderie. He loves giving back, and he’s very excited about being involved in this.

We want to get that going, and there are enough Eastman alumni to make that happen. They’re really supportive of this.

Plus it’ll be a nice summer vacation!

Maybe we’ll have to get a winter program!