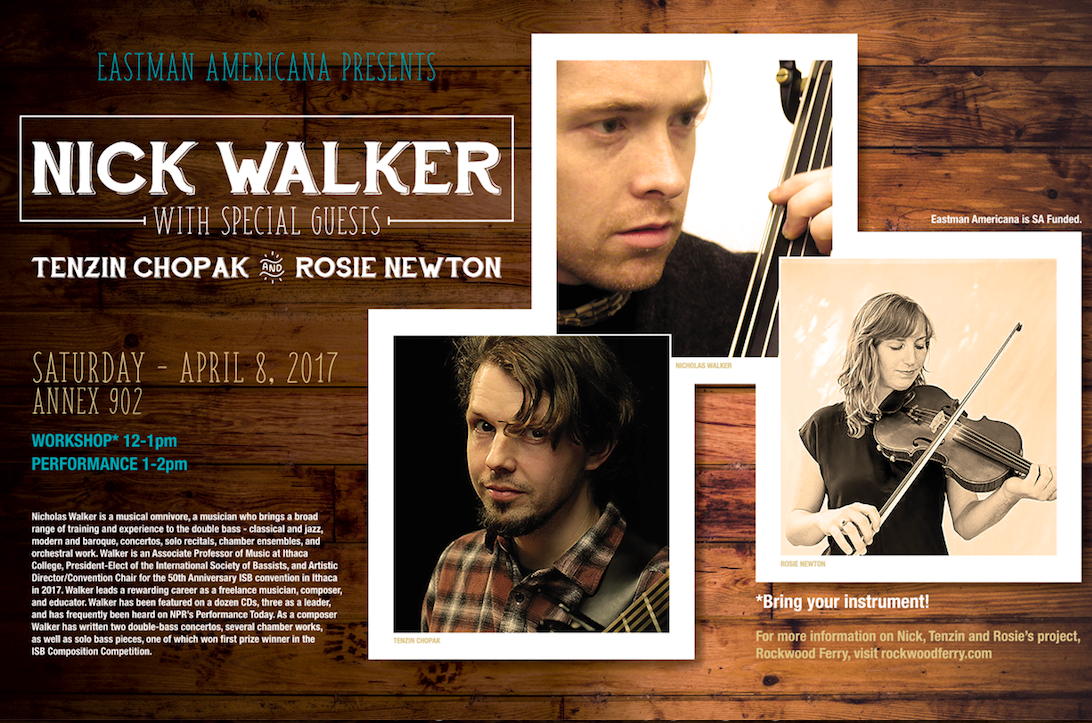 Walker, who is also the International Society of Bassists President-Elect and 2017 Convention Chair is an exceptionally talented and versatile performer, with the ability to switch from folk, classical, and jazz on a dime. His technique and musicianship are revered, and are only exceeded by his pedagogy.

Tenzin Chopak, “The son of a minister and an artist, and the brother of a fellow musician and songwriter Greg Horne, Tenzin learned to love music in his father’s church in Oak Ridge, Tennessee… (and) is known for composing and performing music across the genres of roots and progressive chamber folk, world beat influenced rock, and experimental and improvisational music.”

Rosie Newton, based in Ithaca, “grew up immersed in the rich folk music scene of Woodstock, NY, and began playing the fiddle when she was eight. Newton attended college in Ithaca, NY, where she studied Viola Performance.  While in Ithaca, she found herself swept up by the area’s music scene, which infused her with a deep appreciation for the beauty and diversity of roots music. During this time she also developed a love for singing, and this, in addition to playing fiddle, forms an integral part of her performance.”

The first hour is a jam session and workshop, in which students are encouraged to bring their instruments, and the second hour is the performance block. Here’s a quick Q&A and with Cott.

What is Eastman Americana?

Eastman Americana is a student organization I formed last year for Eastman students that were interested in learning about the history and styles of traditional American music and how to play it. There is not really an avenue for Eastman students to pursue this style of music so I created it!

What kinds of events does EA hold?

We host monthly jams and at least one event a semester, open to the public, that features a local or national professional musician that is an expert in playing traditional American music to give a workshop. In the past, we’ve had Bela Fleck, Bruce Molsky, 10 String Symphony (from Nashville), and The Amigos (Now known as Silver City Bound from NYC).

Can you tell us about the headliner, Nicholas Walker?

I have not met Nick yet but was recommended to him by an Eastman student who had heard about his role as an educator at Ithaca College and as a performer dabbling in many styles. I like the idea of someone who has a classical background but also is comfortable with exploring other genres. It makes Eastman students really feel comfortable with following a similar path with their careers.

What can an attendee expect from this weekend?

Our “larger” events such as this one all run with the same schedule. The first hour is a workshop so it is ideal to bring an instrument so you can be involved as our guests will be teaching tunes/styles of their own musical background. The second hour is an official performance of the group with their own set repertoire.