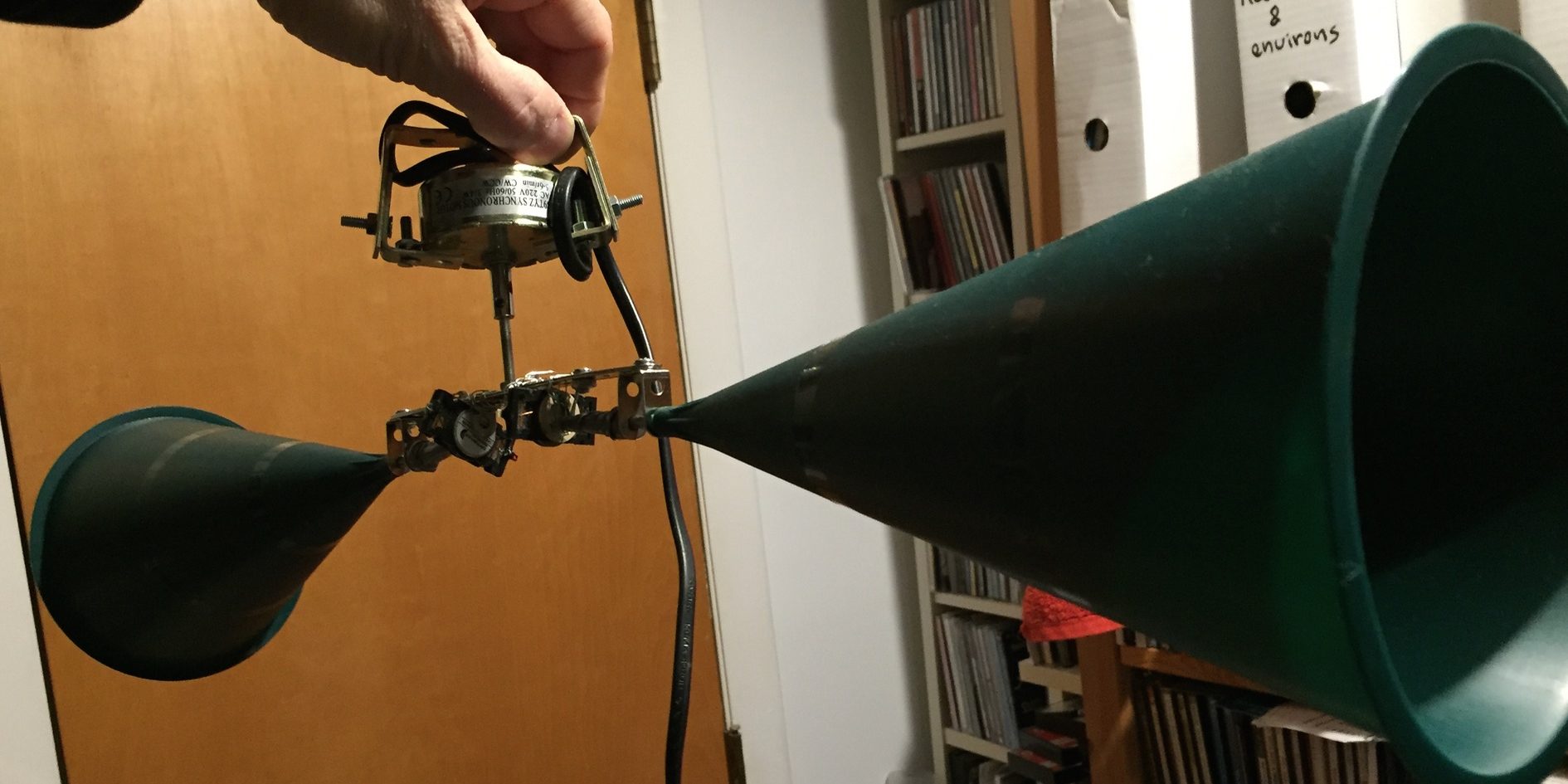 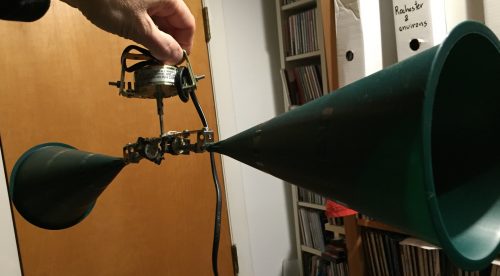 The Roto-Twist, an “intriguing object” in the Eastman Mobile Acousmonium. All photographs by Oliver Schneller.

The Eastman Audio Research Center, formerly the Eastman Computer Music Center, has been pushing the boundaries of electroacoustic music study since their rebranding earlier this year. Their next project, the “Eastman Mobile Acousmonium” or EMA for short, is no different. The project consists of an array of partially mobile loudspeakers of different construction, shape, and size, mounted on stands, which can also tilt and turn, enabling new reflection patterns and soundscapes in the performance venue. This constantly evolving performance will be presented in the Ball Room of the Memorial Art Gallery at 6 and 8 p.m. on Thursday, March 30. In order to learn a bit more about this exciting project, I spoke to Eastman Professor of Composition and Director of the Eastman Audio Research Center, Oliver Schneller.

Tell us a little bit about yourself and your position at Eastman.

I am a composer of mostly instrumental music, and have been specializing in composition for instrumental and electronic sound since 1998. I am interested in ways of combining computer-generated or -processed sounds with live instrumental sound, to produce a sort of hybrid composite. Working in this domain necessarily leads me to considerations of the physics of musical instruments, acoustics, and psychoacoustics (the study of the mechanics of human hearing).

I have been a professor of composition at Eastman since 2015, where I also direct the Eastman Audio Research Studio. 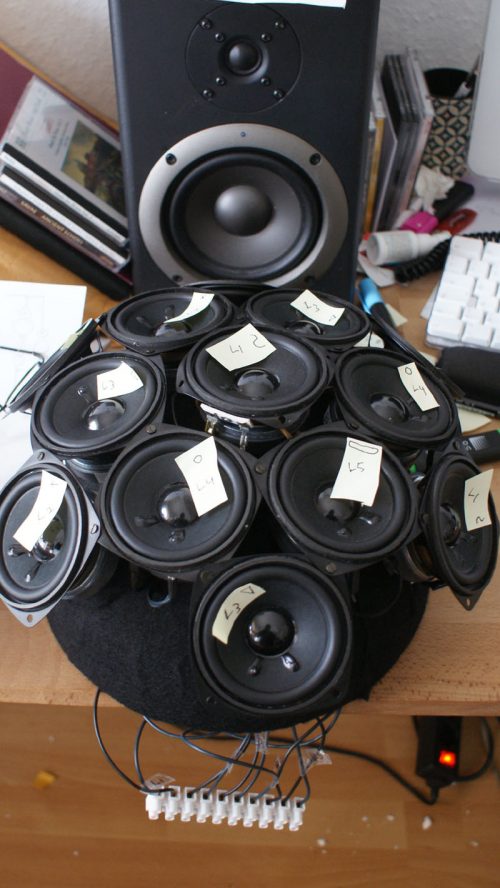 A Multispeaker from the Acousmonium

Where did the inspiration for this project come from and how did it get started?

The inspiration comes straight from my work with instruments and loudspeakers. Loudspeakers produce sound, most often composed sounds. So over the years, I have come to view loudspeakers as instruments: if they are bad, they will reproduce your music in an incomplete or distorted way; if they are good, you will get the whole spectrum of the sound you composed. I work with loudspeakers in a very conscientious manner, since they are the carriers of my sounds. In getting to know loudspeakers, I spent time looking at French composer and sound visionary Francois Bayle’s amazing creation of the seventies, what has become known as an “acousmonium”: an orchestra of loudspeakers, all with different characteristics, just like in an instrumental orchestra. I saw and heard the original acousmonium at Radio France. It left a deep impression. Then, during a residency at IRCAM (a center for composition and sound research in Paris, founded by Pierre Boulez), I became interested in sound directivity, i.e. how a sound projects and spreads in space. I was part of a project that created a loudspeaker that could project sounds with different directivity patterns, just like musical instruments. This interest never left me, and so in realizing the Eastman Mobile Acousmonium [EMA], we are creating loudspeakers, that can actually physically move: twist, turn, tilt, and so change the way they interact with acoustic space.

What should an audience member expect when attending a concert like this?

I’m not so sure that we’re interested in raising and fulfilling certain expectations. We are working with sound in a quasi-sculptural manner, in that we physically control how it radiates into the world. It is an unusual and absolutely fascinating experience, because we are touching upon a human constant: movement. So there is a corporeal dimension to what our mobile instruments do. We are creating a choreography of sounds. We’re all quite inspired by and enthusiastic about this rather novel idea and hope our audience will captivated by it too.

Are there other installations like this around the world?

In the domain of sound installation and sound art, certainly. But in terms of its conception, composition, density, and character EMA is unique! 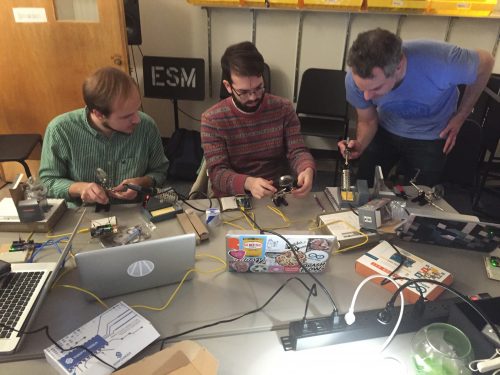 What made the Memorial Art Gallery an attractive partner for collaboration and the ideal venue to host the concert?

Both curators we’ve had the pleasure of working with, Marlene Hamann and Andrew Cappetta, have been brilliantly supportive and open-minded about this project. Without the MAG’s hosting this event, EMA could not have been realized, as the Eastman School has no suitable space for such a distinctive project. The Ballroom at the MAG is perfect in size and infrastructure, so we are thrilled and very grateful for their support.

How did your other collaborators, Ming-Lun Lee and Steven Yi, contribute to the project?

Professor Lee, from the department of Electrical and Computer Engineering at the U of R, will participate with a special speaker, which radiates sound in a hemispherical manner, an intriguing object. Composer and digital artist Steven Yi has composed an amazing 24-channel composition for our mobile acousmonium. 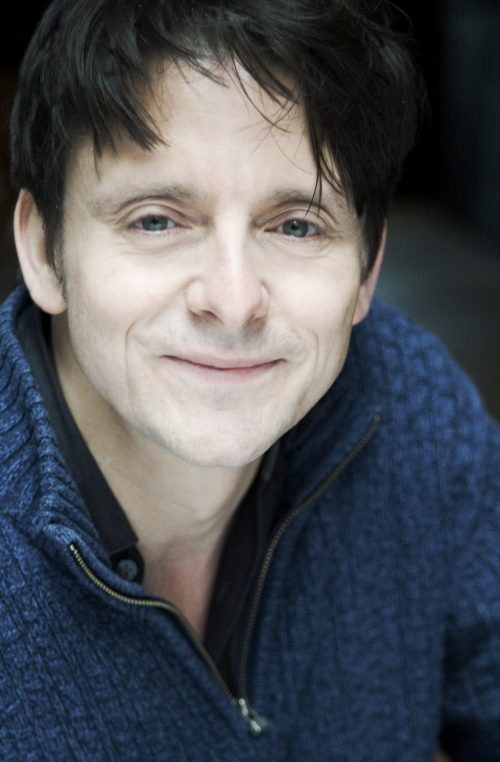