A Passion for Bach 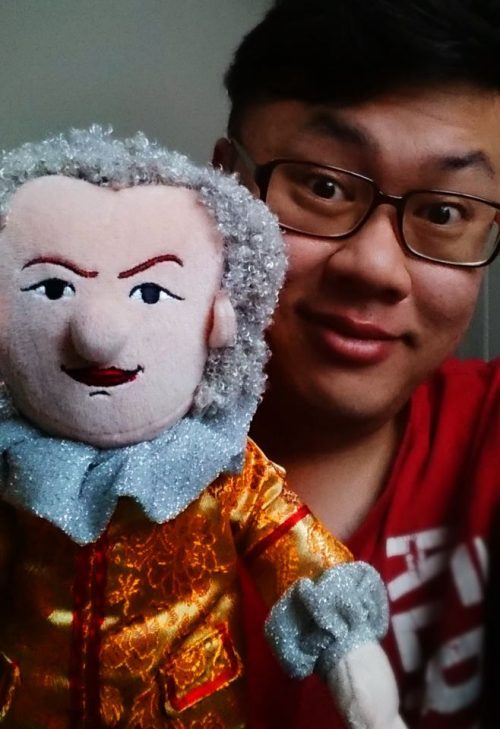 The 332nd birthday of Johann Sebastian Bach was earlier this week, but you can celebrate it this weekend with a performance of Bach’s grandest work, the Saint Matthew Passion. The concert, which brings together more than 40 Eastman students and recent graduates, was coordinated by, and will be conducted by, David Chin, an Eastman doctoral student in choral conducting.

The Saint Matthew Passion, written and first performed in 1727, tells the story of the last days and Crucifixion of Jesus Christ as told in chapters 26 and 27 of the Book of Matthew. An Evangelist narrates the story in recitative (speech-like singing), with lines for other characters such as Pilate, Peter, and Judas; a baritone, also singing in recitative, plays Jesus. The story is frequently interrupted for arias which reflect and meditate on the meaning of the story, settings of poems by Bach’s contemporary, a writer named Picander. And there are also two choruses, frequently singing in elaborate counterpoint, and an orchestra consisting of strings, winds, and continuo (instruments that fill in the harmony and strengthen the bass line). 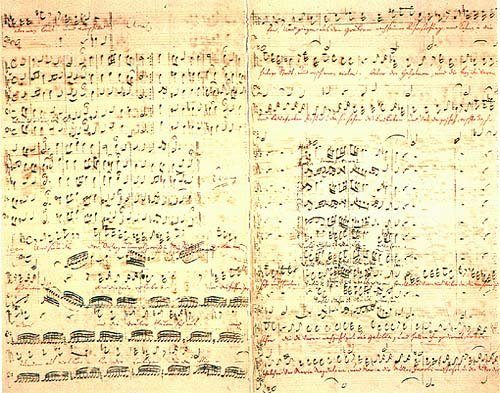 The Saint Matthew Passion remained almost unperformed after the first few performances led by Bach between 1727 and 1742, until it was revived with great success in Berlin in 1829, led by the young Felix Mendelssohn. David Chin points out that Mendelssohn used between 150 and 200 musicians for his performance; this weekend’s performance will use two singers and one instrument to each part, more in line with the forces Bach might have used. Singers from the choruses will sing the supporting parts, and David will conduct from the harpsichord. And, he adds, the audience will be able to join in occasionally – singing the chorales (Bach’s harmonizations of familiar Lenten hymn tunes) with the choir, as they would have originally.

David first encountered the Saint Matthew Passion in 2013, as a student performer in the Eastman Chorale. He immediately became an enthusiastic proponent of Bach in Rochester – and also in his native Malaysia, where he led the first Malaysian performance of Bach’s Saint John Passion in the summer of 2015. (He will be conducting Bach’s B Minor Mass there this summer to observe the 500th anniversary of the Lutheran Church.) David has also conducted many performances of Bach cantatas with Eastman student musicians, as well as the Magnificat with the chorus at Roberts Wesleyan College, where he teaches.

In his studies, David says, “I have learned to appreciate Bach on so many levels. One is aesthetic – the beautiful sound of the music. But the more I dig into the music, the more I discover how intelligent and detailed it is.” As an example, he explains that throughout the Saint Matthew Passion, Christ’s words are accompanied by the gentle sound of strings – except for the moment that he dies, when they drop out completely.” David also points out many examples of numerology in Bach’s music: for example, during the Last Supper Christ’s words echo Psalm 116, and the accompaniment to his words consists of exactly 116 notes.

Putting together such a complicated piece is, well, complicated, David admits. First he had individual rehearsals with the singers playing the Evangelist, or narrator (tenor Pablo Bustos) and Jesus (bass Cody Müller) – and also with the cellist, who plays the bass line of the recitatives. He then worked with the choirs in piano rehearsals, and with the orchestra on “historically informed” approaches to bowing, articulation, and ornamentation. And then, as this rehearsal video demonstrates, he brought everyone together. 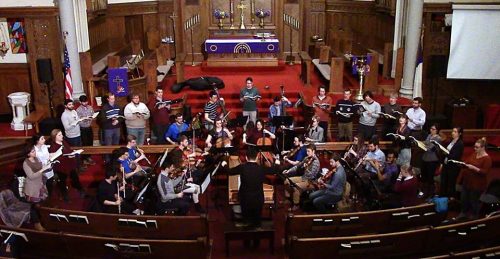