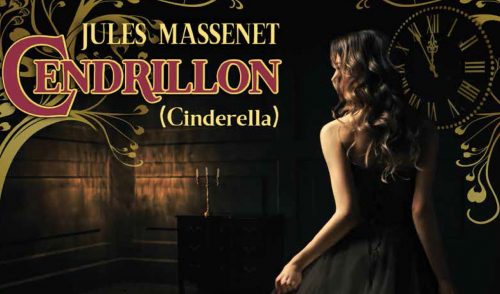 Eastman Opera Theatre’s spring production is something of a rarity: Cendrillon, a retelling of the Cinderella story by Jules Massenet. This opera by the popular composer of Manon and Werther was a great success at its 1899 premiere, but gradually fell out of the repertoire. In recent years it has made a comeback; the Metropolitan Opera will produce it for the first time next season.

“Of Massenet’s operas, Manon is my favorite to conduct,” says Benton Hess, who has led several of them at Eastman, including Manon and a previous production of Cendrillon. “But I do like Cendrillon very much.” His acquaintance with the opera goes back to the 1970s, when he worked with singers performing it – including the late Nicolai Gedda, who recorded the role of the Prince opposite Frederica Von Stade.

Hess refers to Massenet, who lived from 1842 to 1912, as the “French Puccini,” adding that they were remarkably similar, as well as remarkably popular, composers. “Both of them made great international careers in one genre – opera. There are instrumental works by Puccini and by Massenet, but we know them for their operas. And they were both great orchestrators.” Both composers traveled to the premieres of their latest operas in various cities and were eager to make adjustments in the music to suit particular singers. “And Massenet knew just what his audience – the Parisian operatic audience – would like.” This meant – as it did for Puccini — graceful and grateful vocal lines, dramatic leading roles, sumptuous orchestration, and a general air of grand-opera glamor.

“In the general scheme of things, I don’t think Massenet is what we would call a great composer,” says Hess. “But he was a very gifted craftsman.” Hess thinks that Cendrillon shows Massenet “at the peak of his craft as a composer. This music that is fun for everybody: the singers and the orchestra. And it contains some of his most romantic music: the duet of Cinderella and the Prince in Act II may be the most beautiful thing he ever wrote.” 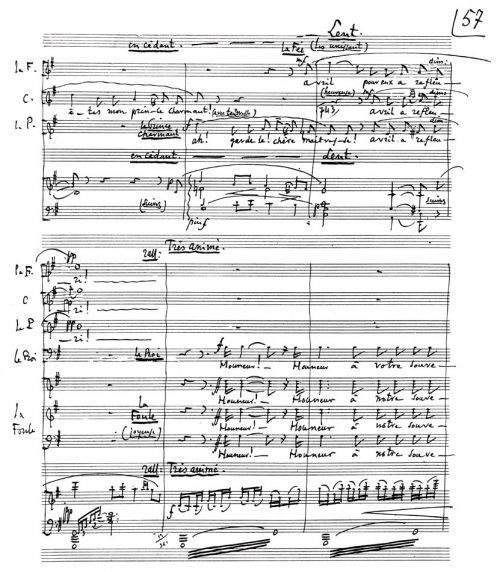 Elegant calligraphy and elegant music: a page from Massenet’s manuscript of Cendrillon

It should be added that in Massenet’s opera, the Prince is a so-called trousers role: both Cinderella and the Prince are mezzo-sopranos (and it will be performed that way at Eastman). There is an option for the Prince to be sung by a tenor – that is the way it was recorded with Nicolai Gedda. “But Gedda hated performing it that way,” says Hess. “A soprano and a tenor singing in sixths and tenths is completely different from treble voices singing in thirds! And it is nothing like what Massenet wrote, which is exquisite.”

Cendrillon will be performed in French. Like most great French composers, Massenet set the French language very precisely and subtly, which makes learning Cendrillon an excellent opportunity to practice French diction – very different from German, Italian, or English. “French is a vowel-driven language — it has sixteen different vowel sounds,” says the conductor. “Often many of the consonants in a word are not pronounced at all.” (The opera’s title is a pretty good example; it is pronounced Sawnh-dree-awnh, with the “n”s hardly pronounced and the “l”s silent.) Massenet also puts different stresses or accents on syllables for emphasis. Learning when and how to do this is all part of learning the “French style.”

Cendrillon was first produced in Paris in May 1899, not long before such revolutionary musical works as Debussy’s Pelléas et Mélisande (1903) and Stravinsky’s Sacre du Printemps (1913). While there is nothing revolutionary about Massenet’s luscious, romantic music, Hess points out that the composer does reference two revolutionary composers in this score. The Fairy Godmother makes her entrance to a fanciful, repeated accompanying motive borrowed from Richard Strauss’ Till Eulenspiegel (brand new music at that time). Even more apropos, the entrance of the lovestruck Prince in Act II is underlined by the famous dissonant chord at the beginning of Wagner’s Tristan und Isolde.

At the same time. Massenet also revives old dance forms like the bourrée and minuet, in keeping with the story’s original 17th century setting (though this Eastman Opera Theater production, directed by Steven Daigle, re-sets the action to the time the opera was written, giving the costumes and scenery an art nouveau touch). “It’s his tip of the hat to musical antiquity,” says Hess.

Eastman Opera Theatre will present Massenet’s Cendrillon April 6 through 9 in Kodak Hall. For ticket information, call the Eastman Theatre Box Office at (585) 274-3000, or go to EastmanTheatre.org

The poster for the original 1899 production of Cendrillon, designed by Emile Bertrand