Protest and Survival: Eastman Opera students on Jake Heggie and Gene Scheer’s “Out of Darkness” 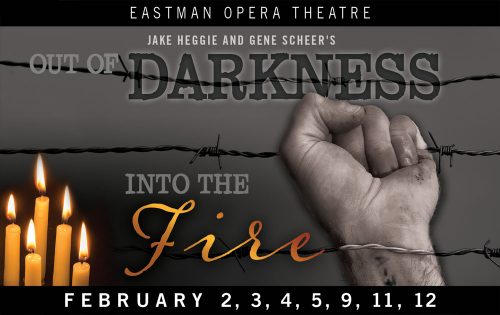 Eastman voice students and opera faculty members are hard at work diving into a subject that seems too surreal to be true. Grief stricken characters in Jake Heggie and Gene Scheer’s newest opera, Out of Darkness, retell their chilling experiences at concentration camps during World War II.

What is most fascinating about Heggie’s choice is the inclusion of two very different situations that pair Acts 1 and 2. In the first act, the audience is introduced to the poetic Krystyna Zywulska, whose story highlights the need for art during times of strife and despair. She is credited historically as someone who narrowly escaped execution by writing poetry and successfully hiding her identity. Her songs often reflect protest and survival- themes that are still common within today’s society.

Teresa Perrotta, a current senior vocal performance major, comments, “This was, by far, the most challenging role I’ve played in both singing and acting.” Nonetheless, Teresa overcame the challenges by researching and reading Zywulska’s published memoir last summer. Teresa beautifully summed up her musical experience by saying, “[the opera] requires legit singing, but with the raw emotion you would find watching a contemporary musical theatre show.”

Act 2 of Out of Darkness transitions to focus on an aspect of concentration camps that was overlooked until the early 2000s. Manfred Levin and Gad Beck were homosexual lovers, imprisoned in separate concentration camps. The text for Act 2 comes from Manfred’s heartfelt diary that Gad, who survived in Switzerland, has preserved. Manfred appears in the Act as an apparition.

Chad Somers, a current DMA candidate playing the role of Manfred Levin, and Peter Elliot, who plays Gad Beck, both offered some insightful commentary on their characters. “When the dialogue tells a story, it’s easy to learn lines,” comments Peter “I was unbelievably blessed to have a lot of source material from which to create the character of Gad.” Peter actually saw Manfred’s journal, which is currently preserved in the Holocaust Museum in Washington, D.C.

What’s the hardest thing about this opera for Peter? “Crying on cue- it doesn’t always happen, but I work on it”

Chad Somers comments: “I was surprised that humor was added to the libretto. Jake and Gene did not want to play into despair the whole time.” Upon further explanation, Chad offered some wise opinions about the state of humanity. The libretto truly focuses on what humans felt during their time at the concentration camps, while maintaining the raw human tendency to suspend reality. For some, this may have been through comedic story telling or sharing jokes, and for others, like Krstyna, through poetry. Tendencies like these are not highly considered when revisiting the events within concentration camps. This creates an effective emotional experience for the audience as they witness the juxtaposition of emotions that many captives felt during their time at the camps. The opera brings a new perspective to a horrific period in world history.

The cast thanks Professor Steven Daigle for his hard work and allowing the students to experience a unique opera with the composer and librettist present at most rehearsals. His artistic vision has created a powerful production that will send chills into your soul. Catch a performance starting this Thursday, February 2, 2017.

Click here for more information on Eastman Opera Theatre’s performances of Out of Darkness and its companion evening, Into the Fire.