OSSIA Looks Forward and Back in Its 20th Anniversary Season 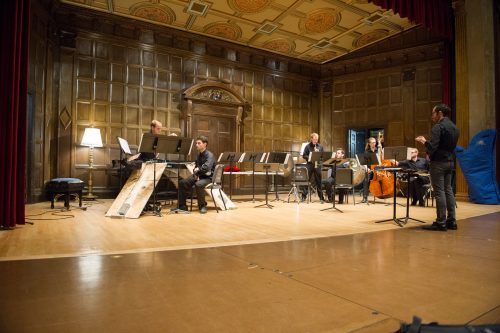 This year marks the 20th season of OSSIA New Music at the Eastman School of Music. This student-run new music collective is one of only a few other groups like it at music schools around the country. Started in 1997 by a group of student composers and performers at Eastman, OSSIA was envisioned as a means to provide additional and alternative methods to new music performance at the school. Many of the original board members have since gone on to have notable careers in New Music with groups such as Alarm Will Sound, JACK Quartet, and Ensemble Signal.

The signature event of this 20th season is a celebration concert on February 15, 2017 featuring the JACK Quartet with OSSIA in Kodak Hall at Eastman Theatre. The concert opens with Morton Feldman’s String Quartet and Orchestra, with JACK Quartet performing as the solo string quartet. Musica Nova will then perform Helmut Lachenmann’s Zwei Gefühle for speaker and large ensemble, featuring a text by Leonardo da Vinci. The concert closes with JACK Quartet playing among Eastman students in Steve Reich’s Triple Quartet.

The mission established at the beginning of OSSIA’s history continues today in its 20th season. This season has tried to involve as many students as possible in order to give anyone who is interested in contemporary music a chance to perform it while at Eastman. Furthermore, this season, like the others before it, is entirely programmed based on suggestions from the community and student body. This focus on community and student involvement has always been a central tenant of OSSIA’s mission and is being celebrated in this 20th season. Nearly 70 students are involved in Morton Feldman’s String Quartet and Orchestra, alone. 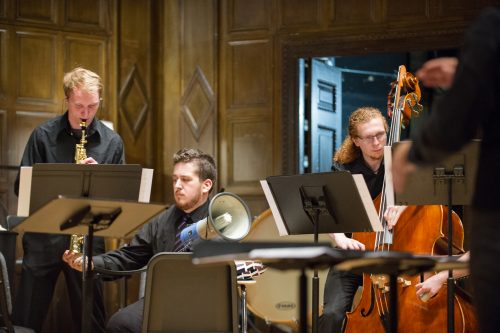 For composition students, OSSIA also runs a contest each year that commissions three Eastman student-composers to write pieces, which will be premiered on the next season. One piece was already premiered at this season’s October concert and two more will be performed in April. This offers all students a real world opportunity to practice collaboration between composers and musicians. In fact, JACK Quartet is giving a talk on that very subject as part of their residency on February 16 at 3:30 p.m. in ESM 209.

OSSIA also provides students an opportunity to gain tangible experience in arts administration. Every season is produced by a student board, which oversees all operations, planning, programming, and recruitment. Board members fill a variety of roles from secretary to treasurer and web designer to librarian. All of these roles provide indispensable skills and practical training for the modern musician, one of the core tenants of the Institute for Music Leadership, which supports OSSIA.

This 20th season and especially the celebration concert with JACK Quartet are emblematic of the type of experience OSSIA provides to the Eastman community. By providing students access to high-quality performance and composition of new music as well as arts administration experience, OSSIA prepares Eastman students for a career in the music industry and hopefully provides them with an interest in the music of today.