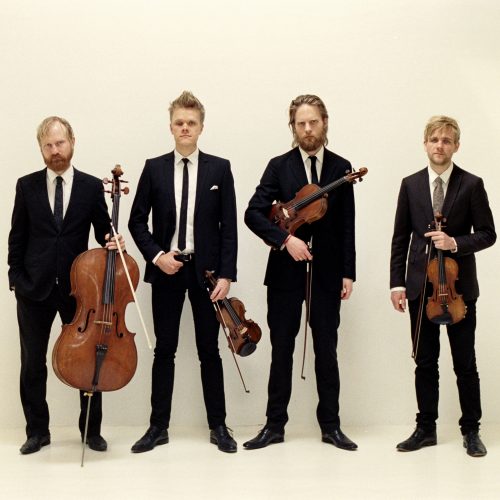 You, Asbjørn (viola), and Frederik (violin), met at a very young age, correct?

Yes, we’ve been together for 15 years. As – more or less – a professional string quartet. But we actually got to know each other even before that.

I think the three of us met in our early teens on a summer camp in the Danish countryside that would meet for a week every year. We were there with our parents; it’s an amateur camp for people of all ages, from children to 90 years old. Everybody is there for the sheer love of music, and you play with two orchestras during the day, and in the evenings, you play chamber music. They have a huge library, and you just start sight reading with all these people.

We started playing together quite quickly, and thought it was really fun. We were also playing soccer, and it was a very positive and good start; built on a strong friendship. After a couple of years at this camp, we started meeting up more regularly…

After a couple of years, we started taking lessons with a teacher in Copenhagen, Tim Frederiksen. He put a lot of time, energy, and devotion into our group. It was really fantastic; he helped us establish how to better play together. We started playing more concerts, but it was also built on a strong personal friendship.

Our first professional gig together was in 2002, and since then we’ve been playing quite a lot, but it wasn’t until a few years that we all started only doing the quartet. Two of us were playing in other orchestras as well.

You do a lot of Western classical music – a lot of Beethoven, especially – but you also do classical and folk music from Scandinavia.

Yes, when we were having lessons with our teacher, he was very pure in what he believed was “the right way” to play in a string quartet. The first two pieces we played were standard repertoire; one was a Haydn quartet, and the other was a Shostakovich quartet. He chose those two pieces because with Haydn you get to learn about the tools of the playing together, the machinery… There’s so many little details that need to be connected. You get into the machine room somehow of a string quartet, and we learned by playing Haydn.

The Shostakovich is different in that it has very clear images, often a very clear story. By playing a very strong piece like that, it’s perfect for stimulating your imagination and what is important about telling a story. That was the beginning for us, and it wasn’t until later that we started playing Nordic music.

In 2004, that was our first concert with a Danish contemporary composer named Abrahamsen, we played one of his pieces in a competition. And after that we started playing with the folk music repertoire.

I have been playing this music since I was a little kid, and Fredrik (too). We just started arranging a little bit for the quartet, and starting to mix it in with our concerts. We felt like it was right to have something from back home when on tour abroad, because it shows something about our musical heritage, and our roots. It’s something different that we wanted to show people, and since then it’s developed. We just finished recording our second CD of folk music that will come out in the summer, I think.

It’s somehow a part of us now, though we spend most of our time playing the standard classical pieces.

To those used to “traditional” classical music, this Nordic folk music has a lot of different sonorities and sensibilities. Can you tell us about that?

First of all, we play Danish, Swedish, and Norwegian music, so it’s music from all Scandinavian countries. And of course you will find very clear differences between the different places.

Just within Denmark, you have so many different sounds and flavors to the melody. There have been many influences throughout the centuries. If you would have to say something generally about the Scandinavian (musical) tradition, it’s that in places with a harbor – so many places in Denmark and Norway – the music has been more influenced by Celtic music, as they were traveling back and forth across the seas.

In Sweden, and in the valleys of Norway, the music is quite different. It’s more melancholy. It’s quite interesting to see the different dialects and to work with them.

When we made these arrangements, we only started with a melody; an “A” and a “B” part of the melody. It’s quite simple material. Then we also try to add a personal touch to it, and some melodies are traditionally much differently, both [in terms of] instrumentation, harmony, structure and form. We take quite a lot of freedom in the arrangements to make them interesting on a stage.

This music traditionally always had a function, because it was dance music. It was until quite recently that music was being used in a concert setting. For us, we aren’t a “folk music” group, but we try to use the strengths that we have as a classical string quartet, but try to find the groove and the rhythm, to get the “right way” of playing this music.

Tell us about your NPR Tiny Desk experience. It was around the time that Woodworks, one of your CDs with Nordic folk music, had just come out.

For the NPR show, we had no idea how big it was! (It) was really cozy; people were just standing there with their coffee mugs just listening very relaxed with one mic and a couple of cameras. It felt quite good. And after that we realized that Adele has actually sung here, like, all these crazy people, we were like, “WOAH!”

I’m actually glad that we weren’t so aware of that!

That concert did a lot for us, and we’re so grateful. (Listen to it here.)

What rep will you be playing at this Eastman concert?

This is a good example of a various program. We will start with a Scandinavian composer, Rolf Wallin, and his piece (Swans Kissing) that we commissioned from him in collaboration with the BBC last year. It’s a fantastic piece of music, and we really like it. You never really know what you’re going to get when you commission a new piece of music, but this is a tremendous piece of music. It shows something that is very fresh and modern, but has a clear story as well.

Then we play a selection of folk tunes from our new CD, brand new arrangements of some Nordic folk music. 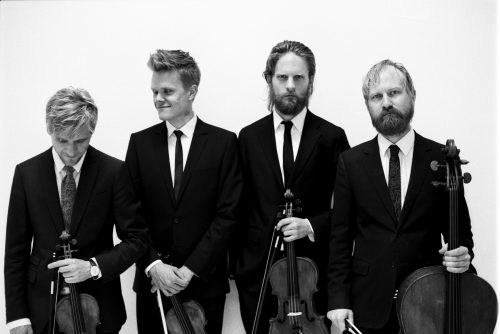