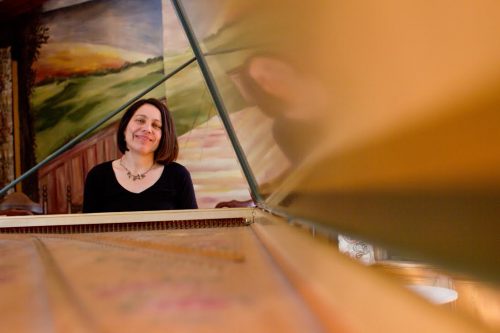 Harpsichordist Josephine Gaeffke found her way to Rochester after extensive travel and exploration. She spent the first part of her musical life studying piano, but now plays only harpsichord; she speaks several languages and has studied and performed in many countries around the world. She has also struggled with (and conquered) severe performance anxiety; the combination of psychotherapy and music helped her through that difficult time. Josephine, who currently directs the Eastman Community Music School’s New Horizons Baroque Ensemble, will lead two new programs during Summer@Eastman 2017: the Summer Baroque Ensemble (weekly rehearsals, June 22-August 3; concert August 10) and Beyond Performance Anxiety: A Workshop (July 5-7, with psychotherapist Grace Harlow Klein, PhD). She is excited to share her experience and insights with the Summer community.

Josephine was born in Utrecht, Holland, and moved with her family to Philadelphia at age 10. She loved Baroque music as a child but generally avoided performing it on the piano, focusing instead on more pianistic composers like Beethoven and Chopin; she found the music of Bach “incredibly dull” when played on modern instruments. She graduated early from high school and spent one year in France, where she decided to audition for André Raynaud’s harpsichord studio at the Conservatoire National d’Aix-en-Provence. Her choice of instrument was mostly a practical decision: 30 students had applied for the one vacancy in the school’s piano program, but only five were auditioning for the sole harpsichord spot. She won the harpsichord position, and when she entered the world of early music, her life changed forever: she loved the gorgeous harpsichords in Aix, rediscovered the music of Bach played on the instruments used during his lifetime, and decided that she “never wanted to play piano again.”

Before Josephine went to France, she had been admitted to the bioengineering program at the University of Pennsylvania. After her year in southern France, she returned to Philadelphia with the idea of becoming a bioengineer, but instead of studying for her classes, she spent all her time studying the art of harpsichord playing and performing with the Penn Baroque Ensemble, so she switched her major to music. She completed her degree at the University of Pennsylvania and returned to France to study at the Conservatoire de Strasbourg, then ended up moving back to the United States to marry Ricardo Zohn-Muldoon (they met as students at Penn; he is now a Professor of Composition at Eastman).

Harpsichord studies with Lionel Party at the Juilliard School further convinced Josephine that she had found her true calling: she turned down full scholarships to study musicology at Harvard, Princeton, and Yale in order to pursue a Master’s degree with Party at Juilliard. Though Josephine loved her lessons (and Party’s insistence on new music every week, played from memory), public performance caused her tremendous amounts of stress. Performance anxiety proved to be so exhausting that she gave up many performance opportunities; eventually, even playing with sheet music — without memorizing — became “a nerve-wracking experience.”

Josephine knew that something had to change. She decided to try psychotherapy, working with person-centered therapists Armin and Grace Klein. Together, they discovered that music, in conjunction with psychotherapeutic tools, could help Josephine overcome her performance anxiety issues, to the point that she says she now feels “absolutely no anxiety” when performing: “Music became the most powerful tool in my therapy.” She reports happily that her psychotherapy has been a complete success. Through psychotherapy, she discovered that her performance anxiety sprang from larger fears in her life; once she became aware of this connection and put words to those fears, her terrors disappeared.

Josephine created Beyond Performance Anxiety: A Workshop for Summer@Eastman to help others explore and free themselves from similar mental predicaments. “Throughout my experience in music, people hardly ever talked about performance anxiety; it seemed that I was expected to deal with it on my own. In this workshop, participants will learn that performance anxiety has a psychological basis and is not caused by lack of preparation or lack of ability. I hope that participants will bring their particular instruments to help in the work toward an understanding of the connections between thoughts, feelings, language, and music. The outcome is a centered place within from which music can flow.” She also hopes to initiate regular discussion-and-dialogue groups about this topic at Eastman during the academic year.

The Summer Baroque Ensemble is a similarly participatory, person-centered project: Josephine hopes that all members will contribute. “I wanted to create a Summer Baroque Ensemble because I have achieved so many wonderful things by performing and I wanted to give others many chances to perform. I used to feel that I should not perform if I could not play without mistakes, but I have discovered although a perfect performance is wonderful, a performance can be even more powerful when it is filled with flaws. So in Summer Baroque Ensemble mistakes are welcome, and I encourage everyone to use them as opportunities for growth. I encourage participants to share their favorite baroque pieces, their expertise, and ideas with the group.” The SBE will perform one concert at Eastman, and another at the Rochester Early Music Festival.

Summer@Eastman 2017 runs from June 26 through August 4; visit summer.esm.rochester.edu for details and registration information. Interested students are invited to contact Josephine directly with any questions: jgaeffke@esm.rochester.edu.