MAESTRO: A Tribute to Fred Sturm 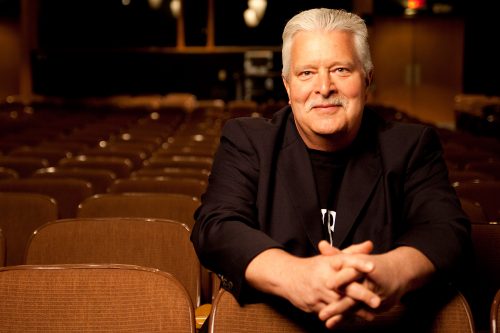 Two area high school band directors plan a tribute concert celebrating renowned jazz composer, arranger and teacher Fred Sturm, who died in August of 2014 following a long battle with cancer, and who directed the Eastman School of Music Department of Jazz and Contemporary Media from 1991 to 2002. Maestro: A Musical Tribute to Fred Sturm will take place Saturday, January 21 at 7:30 p.m. at Honeoye Falls-Lima High School (83 East Street, Honeoye Falls). Admission is free, but donations will be accepted at the door to benefit the American Cancer Society.

Here are some words from musicians taking part in the concert: Eastman guitar instructor Bob Sneider; Fred’s son, bassist Ike Sturm (who will be playing on the concert as well); his mentee and friend Eric Schmitz (current Jazz Ensemble Director at SUNY Oswego); and concert co-organizer Bill Tiberio, faculty member of the Eastman Community Music School. All four are Eastman alumni.

I can’t possibly say how indebted I am to Fred Sturm for inspiring me to be a teacher by seeing his incredible teaching and conducting first hand when I was a UR student.

My first encounter with Fred was when he came as a guest or the Rayburn Wright memorial concert. He worked with my edition of the new Jazz Ensemble. We were playing his arrangement of Miles Davis’s “You’re Under Arrest.” Everyone in the band said “Wow!” Fred would be so awesome at Eastman and he was!

He took a chance on me as a part time instructor, and recommended that Dr. Andrew Dabczynski consider me for a teaching position in Eastman’s Community Ed Division, now known as ECMS. I auditioned for those jobs simultaneously, and within eighteen months I had full time employment.

Fred was my go to guy for career advice and guidance. Not only was he a great teacher of students, but he was a great faculty mentor. If it were not for Fred Sturm, I would probably be somewhere else. Maybe not still in Rochester.

As a writer and composer, Fred was world-renowned in professional circles — not just music education – European radio orchestras, writing for major international jazz artists… He was the epitome of effective teacher, pedagogue, and professional practitioner.

Above all, Fred showed me by example how to be a mature and caring adult and parent by inviting me into his life. His relationship with Suzie, Ike, and Maddy was truly special. I miss Fred so much. Loved that guy!

PS: I hope he was smiling when the Cubbies won!

My dad approached every person and situation he encountered with a deep passion for life and love for those around him.

I remember his encouragement in baseball, writing and my musical endeavors. As our coach, he would expect our best, while intentionally lifting up each team member. He would sit with me as I created school projects, asking questions to spark more creative ideas. Dad would demand that I complete my technical exercises on the bass and then reserve a special time each session to simply play and imagine new sounds and songs.

Through all of this guidance, he lived and loved with an unmatched sense of humor, spending hours on end dreaming up hilarious pranks for those in his world. Thinking about how much he has shaped my life and spirit makes my heart overflow.

There are so many positive things to say about Fred and his lasting influence, it’s hard to choose.
One thing that I will always appreciate is Fred’s openness to different styles and sources of music. I remember our first jazz writers group session at the beginning of my studies at Eastman. Fred asked each of us to bring in a recording of a piece of music we really loved. He made no mention of style, genre, etc. I was pretty intimidated by the atmosphere of Eastman initially and was a little worried about sharing something that my professor and fellow students might not consider “hip,” but I took Fred’s request to heart and brought in a piece that touched me deeply. I shared a recording of James Taylor performing “The Water is Wide.” To my pleasant surprise, Fred remarked that it was “beautiful” and the other students nodded in approval.

Another student shared a piece by Peter Gabriel (another of my all-time favorite artists). Fred also shared a recording—–not from a cutting-edge jazz artist, but a track from a recent album by one of his favorite bands, Steely Dan.

The message was clear: Music is broad and rich. Embrace what you love and use it in your own writing.
Further proof of Fred’s eclectic musical tastes was illustrated later that semester as we prepared a full concert of Fred’s arrangements of pieces by tango master Astor Piazzolla (such great music!). After Fred returned to Lawrence University, I continued to stay in touch and hear about his projects, which included performances and CDs of his big band arrangements of songs by Steely Dan and Radiohead. I’ve programmed numerous charts by Fred here at Oswego State, including pieces based on Native American melodies and rhythms, bluegrass, minimalist techniques, etc. Whatever its inspiration, Fred’s music is always compelling, creative and accessible.

Most of the repertoire for this concert will be music written or arranged by Fred, but there will be other pieces that have been selected by his friends for a particular reason, or even in dedication to him. Pianist John Nyerges will be performing an original solo piece simply titled “Tribute,” and retired music educator and trumpet soloist Tom Davis will be featured on his brand new composition, “Maestro.” This one was written to honor Fred, and was tapped as the title tune for the concert.

It has been overwhelming to witness the response of educators and players when we put the call out to assemble an ensemble to play Fred’s music. I am incredibly honored to be involved and standing with and in front of these amazing musicians and friends.

Fred’s impact on the world of large ensemble jazz composition cannot be overstated. He could write in any style and at any level. Some of his charts for elementary and middle school players are among the most creative in the genre, and he also could challenge the top professional bands in the world with diverse, rich, and innovative works. What made him so unique is that he could also teach and inspire at each of these levels as well. His generous nature, raw intellect, awareness of everyone around him, command of language and teaching strategies, natural ability to inspire, genuine and instant sense of humor, connection, and sensitivity – these are some of the attributes which made him so extraordinary.
To know Fred was to love him and he made a point of making everyone he interacted with feel important. He was such an incredibly gifted person, and the music he created was always fresh and seeking new ears, minds, and hearts.

The concert is not intended to be a memorial service for Fred, but instead, a collaborative musical celebration of someone we miss dearly. The American Cancer Society is a natural beneficiary for this event, as Fred battled cancer for nearly 10 years. We hope people will be generous in the spirit of celebration of a hero to many of us.