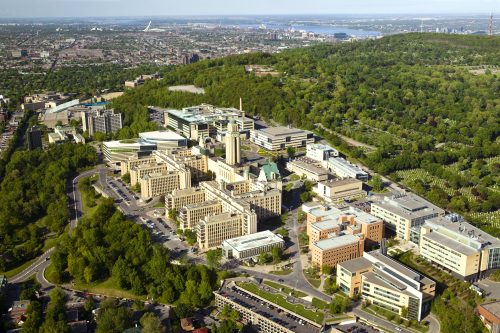 The University, and the city, of Montréal, Quebec

Summer@Eastman Director Dr. Sylvie Beaudette is a native of Québec, but she has lived in the United States for more than half her life. Although she feels quite at home in Rochester, she has returned to her homeland to make and teach music many times over the years: in addition to chamber music and recital performances as a pianist, she has taught lyric diction to choral conductors at the Université de Sherbrooke, and she also spent several summers teaching at the CAMMAC Music Camp in the scenic Laurentides mountains, north of Montréal. Beaudette is an avid traveler and an advocate of cross-cultural education; she is always searching for opportunities to bring music and musicians across borders.

As Professor of French Diction at Eastman, Beaudette was often asked if she knew of any programs combining French language instruction with a musical component. This concept was in the back of her mind when she attended a NAASS (North American Association of Summer Sessions) conference in Montréal in November 2015. She happened to meet representatives from the Université de Montréal’s Ecole de Langues (Language School), who specialize in creating tailor-made French language courses (with socio-cultural activities such as tours, trips, and concerts) for other institutions. She realized that this sort of program could be a perfect fit for Summer@Eastman, and, with the help of the Université’s Ecole de Langues and Ecole de Musique (Music School), she developed a course specifically for musicians, with a focus on French language instruction, chamber music, and a survey of French music history. The new French Language and Music Academy will debut this summer, running from June 5-30, 2017.

This study-abroad program is designed for collegiate music students and adult musicians who have a strong interest in French language and culture. Students will have the opportunity to attend a master class and a concert at Orford Musique (formerly Centre d’Arts Orford), attend a special event at the Maison Symphonique, and participate in the Fête Nationale celebrations. Non-musical extra-curricular activities will include a day in Québec City, a tour of Old Montréal, and trips to museums, the Latin Quarter, and the Atwater farmer’s market. The capstone event, a French Chamber Music concert in Salle Jean-Papineau-Couture, will be held on Thursday, June 29. In addition to performing, students will write program biographies in French and compose and read French program notes to the audience.

All instruments and voice types welcome. Students may apply to study French music of any time period, from the Baroque era to the 20th century and beyond.