“A great man and a great composer”: Mark Davis Scatterday on Karel Husa 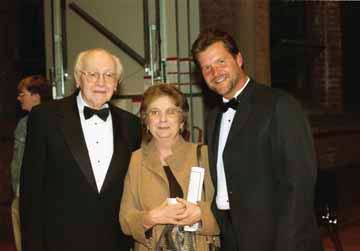 The Czech-born American composer Karel Husa died on December 14 at the age of 95. Mark Davis Scatterday, director of the Eastman Wind Ensemble, was a close associate of Husa’s and performed several of his scores with the EWE. He has written this tribute to Karel Husa.

The world mourns the loss of a great man and great composer.

Not only was he a world-class musician and composer, Karel Husa was also the kindest, most humble human-being I ever met – a rare combination in this day.

I was lucky enough to have known him and performed his music for 37 years, the last 30 at Cornell and Eastman. Each time, I felt honored and privileged just be in the room with him. Karel always made everyone feel that HE is the privileged one, that it was HE that should be thanking you – and he did that in the most heart-felt way, every time. He many times started a rehearsal with an apology – that he knew his music was difficult; he frequently asked the EWE, “Do you hate me because this is so hard?” But he knew that players would find a way to take his virtuosic and complex music and express themselves in the finest way. When a player was struggling with a part to his music, he would mention that “When I was a clarinet player, I remember that this was very hard” and then winked at the player with the confidence that they could find a way to do it. Of course he never was a clarinet player, but he immediately put players at ease with his empathy. This humble man stood up in front of students and professionals and opened his heart to them, just as his music always found a way to connect to the players and change their lives – and, in turn, to the audience. And Music for Prague 1968 was one of the greatest compositions of the 20th century — it simply said it all.

I remember preparing the first performance of Apotheosis (the orchestral version with choral parts) for him to conduct with in 1990. I was so excited about this new “version” and felt honored to be part of such an important event. I will never forget completely losing myself emotionally in the audience for the performance – the first time that I have ever literally “broken down” in front of people in a concert. I was not embarrassed by this moment – it actually altered my reality as a musician and I owe that experience (and many more later with Karel) as a changing point in my career. Music is supposed to do this to people, and I had finally confirmed what I thought I knew about music: that GREAT music does this, every time. I have always strived to experience this kind of true emotion ever since that day.

I owe so much to this wonderful man, mentor, and dear friend. I know we all feel the same way when we met him and performed or heard his music. Thank God we had Karel Husa in our lives – I know he was thankful that we were in his.

Click here for an earlier blog post for Mark Scatterday’s thoughts about a spring 2016 performance of Karel Husa’s Music for Prague 1968 by the Eastman Wind Orchestra.