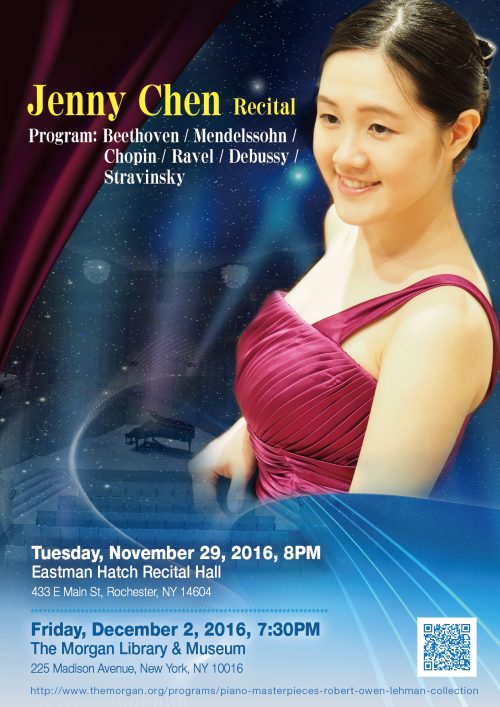 On Tuesday, November 29, Eastman DMA student and pianist Jenny Chen will present a recital of works by Beethoven, Chopin, Mendelssohn, Ravel, Debussy, and Stravinsky in Hatch Recital Hall. This performance is a preview of an upcoming concert at the Morgan Library in New York City on Friday, December 2. The repertoire for this performance was chosen from manuscripts contained in the Robert Owen Lehman Collection at the Morgan Library. Robert Lehman is the husband of Senior Associate Dean of Graduate Studies and Professor of Theory, Marie Rolf. To find a little more about this project I spoke to Jenny about the process of programming and preparing for this recital.

Tell us a little bit about yourself?

Jenny: My name is Jenny Chen and I am a twenty-two-year-old pianist studying at the Eastman School of Music. I am actually the youngest Doctor of Musical Arts candidate (second year) and teaching assistant at the school. I started my education at the Curtis Institute of Music at age 10 where I studied with Eleanor Sokoloff and Gary Graffman. I graduated from Curtis with top honors and had the opportunity to play in the Dean’s Honors Recital as well. My master’s degree is from the Yale School of Music, where I studied with Robert Blocker and Melvin Chen. Currently at Eastman, my mentor is Douglas Humpherys.

I understand that the repertoire for this recital was chosen based on manuscripts in the Lehman Collection at the Morgan Library. How does access to the manuscripts change your preparation and performance for a recital like this one?

Jenny: Unfortunately, I will not get a chance to look at the manuscripts until the day of the recital. I will be presenting the recital alongside Dean Rolf and her research crew, which will be showcasing the manuscripts during the event. Dean Rossi will also be speaking prior to the recital. It will be fun to perform the music live for an audience that has just had a chance to learn about the works from the composer’s own score!

You are also taking this program to the Morgan Library in New York City. How does it feel to get to perform this program in such a famous venue?

Jenny: It is exciting to perform in such a famous venue in New York City! However, I always remind myself that the hall or environment we perform in does not make the music any different. The most important thing is to present an authentic interpretation that shares your heart and soul with the audience. Music creates its own world no matter where you are. I also plan to have a few surprises in store for the encore that hopefully everyone will enjoy!