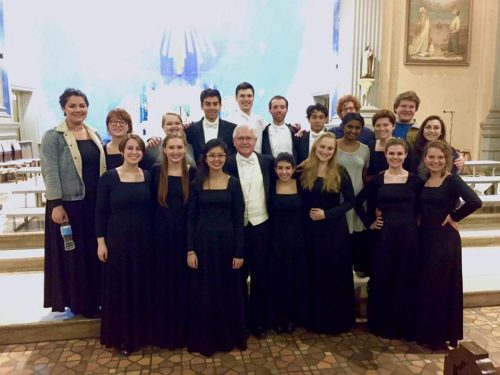 Earlier in November, the Eastman Chorale, under Eastman School of Music Director of Choral Activities William Weinert, traveled to Ohio for two performances in November. The Chorale joined the Oberlin College Choir, directed by Eastman alumnus Gregory Ristow (MA ’04 MM ’04 DMA ’11), for a special joint event on Thursday, November 17, in the College’s Finney Chapel. The two ensembles then traveled to Cleveland on Friday, November 18, to reprise the concert as part of the “Great Music in a Great Space” series at Mary Queen of Peace Church.

We asked an Eastman Chorale member, baritone Nathan Kessel, to write up some of his and the ensemble’s experiences on this brief tour.

Imagine being on a bus with thirty talented singers for six hours (give or take). It wasn’t too bad. No excessive singing or screaming, it was actually kind of quiet. Everyone sleepily boarded the bus at 9 a.m. and it was a smooth ride from the Eastman School of Music to the Oberlin campus in Ohio. For most of us it is our dream to perform so we were all excited to be going on a performance trip. I was excited to see my friends at Oberlin whom I had met during various summer programs, competitions, and college auditions. Once we arrived we were looking forward to seeing the campus. Most of us had never been there before and we were impressed by its beauty, but there was no time for exploring; we got right to work. We got off the bus and walked into the chapel where we were to perform that night and started rehearsing.

After we rehearsed for an hour or so, the Oberlin choir arrived and began warming-up. They sounded great! I really enjoyed listening and performing with them. After rehearsal we all had dinner in the dining common; it was a mega buffet and for some reason it was very easy to get lost. We had our performance shortly after dinner. We got a standing ovation and audience members approached us afterwards to thank us and to tell us how much it meant to them that we were there to share our gifts.
That night we all stayed with different host families. It was extremely kind of the people in the Oberlin community to open their homes to us and provide us meals.

The next day we participated in a eurythmics class where we got to explore all sorts of rhythms and how movement can help us further express our music. Afterwards, it was finally time to explore Oberlin!! I had the chance to catch-up with old friends and they showed us around the campus. We learned that the town was small and the campus was huge! There was a lot of greenery too. The conservatory had a beautiful pond and there were trees everywhere! It was quite a contrast from the city atmosphere of Eastman. There was a large park across the street from the conservatory and everything seemed so far away. It was surprisingly quick to get from one place to the next. We didn’t even notice how far we were going because we were all talking the entire time and were so happy… time was flying by. 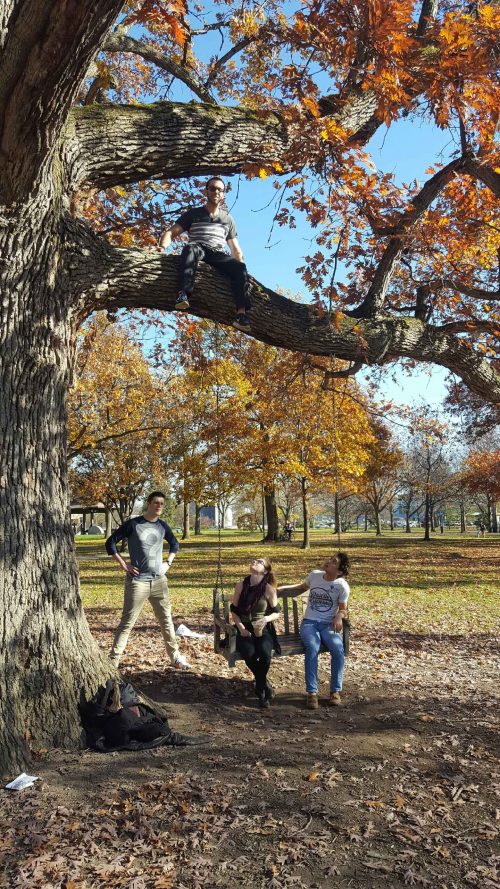 Nathan is in the tree, with (from left to right) Keith Klein, Alicia Chamberlain, and Charles Sciascia. Photo by Jonathan Rhodes.

We saw the coffee shops (although I’m still partial to Javas, Spot, and Press), stores, and one of the many concert halls. When we went to see where the operas are performed the doors were locked. We started to leave but then someone in the box office invited us into the hall to see what they were working on. They were designing a set for the next play. They explained to us that they were building a space for the audience to sit on stage so the production could be more engaging and intimate. It was a beautiful hall. After we finished exploring the grounds it was time to get back on the bus to head off to Cleveland.

When we arrived in Cleveland we were back in an environment that we were used to, city life. We had our rehearsal and then plenty of time for dinner. The concert that night was unbelievable. Everything seemed even more polished then it had the night before! I think the toughest part of the trip was saying goodbye to old friends and new friends that I know I probably won’t see for a long time. The trip back seemed incredibly short and it was nice to get off the bus to see Eastman, and it had just started snowing. It felt like I was home.