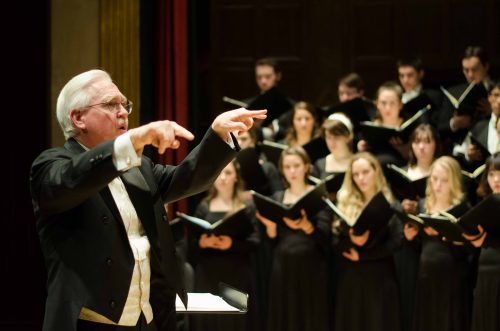 The Eastman Chorale will soon be embarking on a concert tour to Ohio to perform at Oberlin College and in Cleveland. On November 18, the Chorale will present a joint concert with the Oberlin Choir at Finney Chapel on the Oberlin campus. Both choirs will travel to Cleveland to perform at Mary Queen of Peace on November 19. Rochester audiences will also get a chance to hear the Chorale before they go on tour in a send-off concert performed in Kilbourn Hall tomorrow night – November 11 at 8 p.m. To get some more information on this exciting opportunity for Eastman students, I spoke to Chorale’s director, Professor William Weinert.

What inspired this tour to Oberlin and Cleveland? How did it come about?

Over several years the Eastman Chorale has been repeatedly invited to perform on the excellent concert series at Mary Queen of Peace Church in Cleveland. Last year an Eastman graduate, Gregory Ristow (MA ’04 MM ‘04 DMA ’11) took over the choral ensembles at Oberlin, so the thought occurred to me to make a trip to present some joint concerts with the Oberlin Choir both at the Cleveland church and at Oberlin’s main concert hall, Finney Chapel.

There are so many faculty and student connections between Oberlin and Eastman in many areas, but the choral connections are really fascinating. Both Greg Ristow and I went to Oberlin as undergrads, and Greg came here eventually to graduate school a number of years after I ended up teaching here. But beyond that, one of the most important 20th-century American choral conductors, Robert Fountain, established an internationally known choral tradition at Oberlin–and was an Eastman graduate in voice (BM ’41, MM ’42). Fountain had just left the Oberlin faculty when I arrived as a freshman, but I was lucky enough to study with him and eventually serve on the faculty with him at the University of Wisconsin–so all this is quite an interesting web of connection.

What sorts of venues will you be performing in on this tour?

Mary Queen of Peace is a beautiful, large, resonant church on Cleveland’s west side. Finney Chapel in Oberlin is a wonderful concert hall in the center of the Oberlin campus. It has a lot of meaning for me, of course, from performances there during my student years, but also, the Eastman Chorale traveled there in 2001, and I was invited back to conduct Mendelssohn’s Elijah there in 2008.

What sort of repertoire will the Chorale be taking on this tour?

The Chorale will sing two fairly new American settings of Walt Whitman texts by Byron Adams and Daniel Shapiro, and a motet of Bach, “Der Geist hilft.” The Oberlin Choir will present some early French music and a choral ballad by Samuel Coleridge-Taylor. We will then sing a number of terrific works with the two choirs combined, including motets of Brahms and Georg Schumann, the Randall Thompson Alleluia, and several spiritual settings by Moses Hogan (an Oberlin classmate of mine) and Robert Fountain.

I understand that in the send-off concert in Rochester, the Chorale will be recording a Samuel Adler piece; can you tell us a little about that?

We premiered the charming Adler Five Choral Scherzi for chorus, viola, and guitar in 2008. This year, Eastman guitar professor Nick Goluses will be including this work on a CD for Linn records of all of Adler’s work for guitar. (Nick will record the Adler Guitar Concerto with Neil Varon and the Graduate Chamber Orchestra this winter.) We’re also delighted to be collaborating with the virtuoso principal violist of the Pittsburgh Symphony, Randolph Kelly.

What sort of benefits does a tour like this bring to the participating students?

Such a long list of things! In addition to reaching a new level of polish on our repertoire and being able to collaborate with some peers and friends at Oberlin, the students will be able to reach a different level of focus by leaving their academics behind (briefly!) for a couple days, and concentrating only on performing as an ensemble. We will also have a Dalcroze Eurhythmics workshop to explore this repertoire with Greg Ristow, who is one of one of the country’s experts on this powerful way of exploring music.

Whenever the Chorale is able to tour, students return with a new perspective on their work, and the unique inherent power of choral music to reach deeply into audiences and into themselves.

Eastman Chorale’s send-off concert and tour dates are as follows: