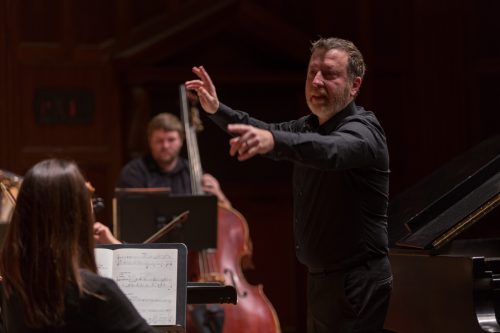 Tonight at 8 p.m. in Kilbourn Hall, Eastman Musica Nova gives its first concert of the fall semester. A highlight of the program (described in detail below) will be performances of music by Frank Zappa — “Dog Breath Variations/Uncle Meat,” “Outrage At Valdez,” and “G-Spot Tornado” from The Yellow Shark — conducted by Associate Professor of Conducting and Ensembles Brad Lubman.

For those who don’t know, what is Musica Nova exactly?

There are several ensembles for new music at Eastman, and this is the “official” one since a faculty member runs it. For example, Ossia, which is run by students through the Arts Leadership Initiative. Then there are some groups that come and go. Musica Nova is the official new music ensemble of Eastman.

We do a wide variety of repertoire that covers anything that comes from the classics of early 20th century to the most recently composed pieces, and everything in between. We do a wide range of styles as well. That’s the key thing; I try to cover as many different styles in contemporary music as one can do in a given year.

With this wide range of styles, what’s the personnel?

It’s like all the ensembles at the school, there’s a system of rotation. Students are assigned to the ensemble on a rotating basis, and the repertoire will range in size for pieces from 6 to about 25 players.

There are models for this, notably the Ensemble Modern in Frankfurt, the London Sinfonietta… Where the personnel is flexible, and it will typically range from about 6 to 25 people. It could be more than that given the piece. That’s the general scope for Musica Nova.

With this wide range of styles, what’s the personnel?

One of the last things that Zappa did before he passed away was this project he developed with the Ensemble Modern. Some of these pieces were pieces that he had already performed extensively with his band, the Mothers of Invention. He orchestrated those parts for this large-size contemporary ensemble, and then he worked with the members of Ensemble Modern through improvisation, through trying out written pieces. They eventually developed an evening-length collection of pieces called “The Yellow Shark,” which they recorded and released back in 1992 and 1993 respectively.

I had the pleasure of performing the whole Frank Zappa concert with Ensemble Modern at the Ojai Festival in California in 2010. That was a combination of pieces from “The Yellow Shark” and some other Zappa pieces. That was wonderful because I’ve worked with them since 1997, on a fairly regular basis, with a wide variety of different repertoire.

But when it came to doing these Zappa piece with them, it was a cool thing because I could ask them: “So, hey, what was it working with Zappa, and how did this piece get developed?” In some cases some of things that are in the sheet music are a result of things that went on between Zappa and the ensemble in rehearsals… That was a great experience to work on that with them.

I’ve done the pieces in many places; typically I do the ones that are on this Musica Nova concert. I’ve done them at Eastman at least once before and I did them at the Bang on a Can Summer Institute, where I am every summer.

They become these iconic pieces for those who grew up as younger musicians, and in fact I remember, when this CD came out, it was still at a time when the idea of “boundaries” in different styles of music was starting to evaporate. The idea that this superb Ensemble Modern, who were already known for doing some more what we would call “hardcore avant-garde” music were releasing an album with Frank Zappa, had a meaningful impact. 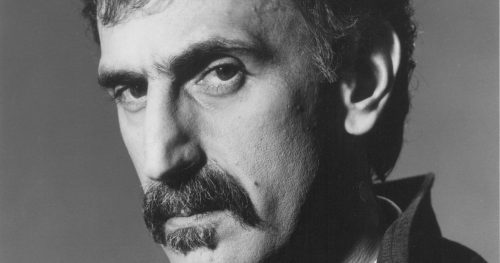 It sounds like it was an easy decision for you to bring these pieces to Musica Nova. What about these pieces makes them unique?

Yes, it was an easy decision. In terms of musical educational reasons, they were really worthwhile to do. But for musical reasons, they make a nice little suite by themselves.

That’s why I chose them… There are a lot of pieces in “Yellow Shark” that are much smaller pieces that maybe involve four or five players, and there are one or two pieces that involve a spoken narrative, where the ensemble is doing sound effects.

Frank Zappa was an important figure who stood on many sides of things. He wasn’t just this legendary rock figure and guitarist, but a producer, and he wrote serious concert music, and towards the end of his life, he was active politically. He was an interesting character.

When you look at the type of musicians that have been coming out of Eastman for the past ten to fifteen years, you have these very well-rounded musicians who are versatility who are able to understand performance and business. There are a number of musicians who are role models or figureheads for that, with no more boundaries. The artist can also be a responsible citizen and run his or her own business. Zappa was one of these people.

Musically speaking, Zappa took what he did very seriously and was highly influenced by Stravinsky and Varese. Here’s a guy who, allegedly, would be backstage with his own group and he would have cassettes of Stravinsky and Varese and be listening to that and composing pieces. This is not just a rock’n’roll guy who turned into a classical guy. This is somebody for whom all of these things were an important aspect and influence from an early age.

With these pieces, there’s something that’s more tuneful; Zappa certainly has some pieces where you say: “Oh, that’s the Varese influence!” These pieces don’t have that quite so much, they’re much more tuneful, and they’re a lot of fun, and they’re orchestrated really well. People love hearing them and playing them… They’re very satisfying.

What’s the instrumentation for the pieces you are playing?

It’s about 25 people. It’s what one would call an “expanded sinfoneitta-sized” ensemble, “sinfonietta” sort of means one of everything, from reeds, brass, strings – usually a quartet – and various percussion.

What’s on the rest of the concert?

It’s more hardcore contemporary music. We have two of the giant figures of 20th century and 21st century: Elliott Carter, and Harrison Birtwistle. Two of my own DMA students will be conducting the Carter and Birtwistle pieces.

The concert opens with a piece by Carter called Asko Concerto, because an ensemble in Amsterdam called the Asko Ensemble commissioned the work. This is a late work for Carter, who died in 2012, just before 104th birthday, and he was always composing. It’s from his late period, so it’s a bit more streamlined, but it sounds like a concerto for a small ensemble. That’s conducted by Mark Powell.

Then we have a big work by Birtwistle called Silbury Air, that’s being conducted by Edo Frenkel. There’s a similarity, not on the surface, in how Birtwistle and Carter worked with intricate structures of time, but with the time moving at different speeds simultaneously. They handle it in different ways, but that basic idea is a real tour de force for an ensemble. In Silbury Air, Birtwistle plays around with the perception of time in a remarkable way. I think it’s one of his great works.

That’s the first half, and then we go to the Zappa — something that beneath the surface is very serious, but on the outside is fun and attractive.