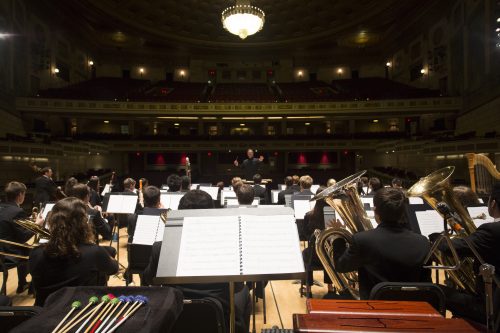 The University of Rochester and the Eastman School of Music will be welcoming alumni back to town and holding special events starting Thursday, October 6, for the school’s annual Meliora Weekend. Between the alumni reunions, distinguished guest appearances, and intellectually stimulating conferences, there will be no shortage of things to do and ways to express school spirit. No celebration weekend at Eastman would be complete without a few concerts, so here’s a preview of all of the performances happening this weekend:

The Eastman Wind Ensemble and Wind Orchestra kick off Meliora Weekend@Eastman on Thursday night with a concert featuring notable alumni. Conductor Mark Davis Scatterday (DMA ’89) will be sharing the podium with his predecessor Donald Hunsberger (BM ’54, MM ’59, DMA ’63) for a program of music including standards by Bach and Holst, as well as Dance of the New World by Dana Wilson (PhD ’82), Canzona by Peter Mennin (BM, MM ‘45, PhD ’47), and Howard Hanson’s Chorale and Alleluia. Trombonist Jim Pugh (BM ’72) also returns to Kodak Hall to perform as soloist in Walter Blanton’s Sonant Voyage.

Join Eastman artist faculty at this special Eastman Virtuosi concert. The program will feature Brahms’ Piano Quintet and also Samuel Adler’s Into the Radiant Boundaries of Light and Alec Wilder’s Do You Ever Cross over to Sneden’s?, sung by guest artist and alumna, mezzo-soprano Joyce Castle (MM ’66). This program will also feature a performance by Eastman’s new professor of bassoon, alumnus George Sakakeeny (BM ’78).

As part of Meliora Weekend’s Paul R. Judy Conference (entitled “Innovate. Lead. Music.”) the Eastman Saxophone Project will present a free concert in Kilbourn Hall. This group strives to promote the popularity of the saxophone through innovative programming and versatile performances. Since their founding in 2010, the Eastman Saxophone Project has quickly become one of the most recognized saxophone ensembles in the world. It made its New York debut at Steinway Hall in 2011, was the featured ensemble at the 2014 North American Saxophone Alliance National Conference, and has appeared on National Public Radio through WXXI-FM’s Backstage Pass. The ensemble made its Kennedy Center debut in 2015, and completed a tour of China in 2016, where it was the featured ensemble in music festivals in Beijing and Shanghai.

Join current students and distinguished alumni of Eastman’s double bass studio as they celebrate James VanDemark’s 40th anniversary of teaching at the Eastman School of Music.

For information on all of the events happening around Eastman and the University of Rochester this weekend, visit the schedule at the Meliora Weekend website.