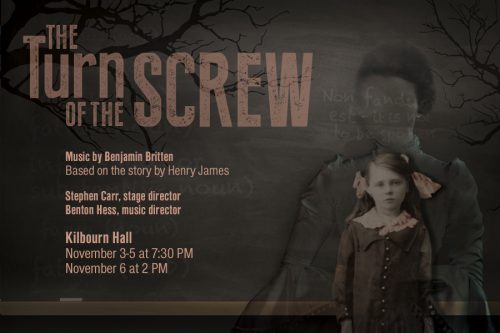 Eastman Opera Theatre will perform “The Turn of the Screw”

An Interview with Stephen Carr, stage director of Eastman Opera Theatre’s Turn of the Screw

Starting next week, The Eastman Opera Theatre will present Benjamin Britten’s The Turn of the Screw in Kilbourn Hall. The production will be sung in English with projected English supertitles and a small chamber orchestra. The performances will feature two rotating casts of Eastman School of Music undergraduate and graduate students. Performance dates and times are listed at the end of this post.

Stephen Carr, Associate Professor of Opera and Musical Theatre Studies, serves as the stage director for this production. I had an opportunity to interview him and discuss some of the inspiration for programming this show and the challenges of bringing it to fruition.

The Turn of the Screw is not the first production audiences usually think of when considering opera. What do you think this production will add to the season both from an audience and student performer perspective?

While The Turn of the Screw may not be the first title that comes to mind for someone considering attending an opera, I think it’s a great choice for a first-time opera experience. It’s dramatically compelling, fast-paced, and sung in English. Britten’s music is haunting and atmospheric, and this is a ghost story, perfect for our first show of the season, which always goes up around Halloween. Our other two main stage productions, Massenet’s Cendrillon and Jake Heggie’s Out of Darkness/Into the Fire couldn’t be more different.

That being said, Eastman has produced The Turn of the Screw a few times in the past. How is this production bringing something different to a show that Eastman has done before?

I believe the last time that Eastman produced this show was in 2008. Steven Daigle was the stage director for that production, and it was a different creative and production team. So I’m sure that this production will be very different conceptually, as well as having a different cast and orchestra.

What was your inspiration or at least some of the deciding factors that led you to decide on producing this opera this year?

What skills or experiences does this opera encourage that will benefit the students?

We choose titles which have roles that many of our current students could play successfully, and this one was a perfect fit for many of our current students. The opera is in English, and I personally think that young singers learn a great deal by performing pieces in their own language, in terms of connecting with the text and feeling the immediate necessity of clear communication. Directing a show in a college setting, I try to make the rehearsal and staging process one that will serve as a sort of template for the students after they leave this academic environment and begin working in the professional world. It involves a lot of exploration, introspection, and dissection. This piece is a special joy to work on with young singers, because it asks many questions, can be interpreted in all sorts of different ways, and demands real in-depth analysis. And so I hope the process of bringing this piece to life will enhance and inform the way they approach their work in the future.

What are some of the greatest challenges the cast, crew, and orchestra are faced with in The Turn of the Screw?

Britten’s music is complex. I know our students have been working very hard to get the music in their voices and in their bones. The instrumental writing is very difficult as well, and the small chamber orchestra required for the piece basically demands a team of virtuosic soloists. From my perspective as a stage director, one major challenge has been finding a way to create the 11 different locations called for in the libretto on a small stage with limited wing space and no fly space. But sometimes constraints generate creativity, and boundaries can force you to think outside the box. 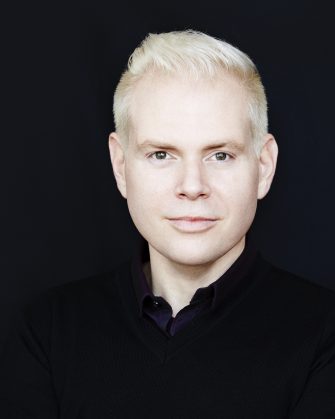 Stephen Carr, stage director of The Turn of the Screw

You talk about this production being different conceptually from the previous ones. What is your concept for this show? What do you hope to share with the audience with this work?

The design for this production was influenced in part by the look of old Victorian photos, and also by a piece of artwork that is hanging at Fuego Coffee down on Euclid street. I was having coffee there with our costume designer, Bekah Carey. We were discussing what we wanted our color palate to be, and we both looked up from our coffee, pointed up at the painting at the same time, and said “that!” Some key symbols play a prominent role: the chalkboard and the rocking horse, for example. And I’ve decided to stage the scenes which originally take place at a lake in a bathtub instead. But I don’t want to give too much away! You’ll have to come see for yourself.

All performances take place in Kilbourn Hall at Eastman. Pre-performance talks take place one hour before in the Ray Wright Room, Main Building.