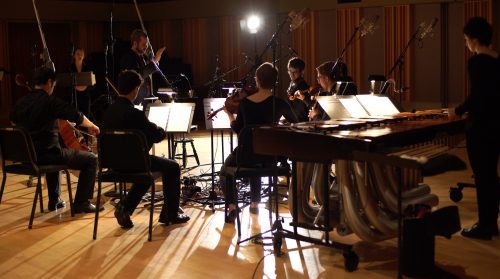 Music theory is sometimes seen as the most cerebral and abstract branch of musical scholarship – a mixture of math, acoustics, and philosophy. But throughout history, many music theorists have also been composers; Rameau, Schoenberg, and Milton Babbitt are famous examples. The tradition of the “composer-theorist” is alive and well in the Eastman School of Music’s distinguished music theory department. A concert in Hatch Recital Hall on Tuesday, September 27, at 8 p.m., will feature chamber works by four composers on Eastman’s theory faculty: Zack Bernstein, Matt Curlee, Dave Headlam, and David Temperley. “We think about other composers’ music all day long – how it works, how it’s put together,” explains Temperley. “It’s not surprising that we sometimes get ideas about new things to try. Hmm, Mozart did THAT; what if I did THIS?”

All four composers are well-known for their scholarly activities – Headlam and Bernstein are experts on serial music, Temperley studies music psychology, and Curlee is writing an aural skills textbook – but composing has long been a part of their lives as well. Temperley was an active composer in the 1990s and almost got a doctorate in that area before switching into music theory at the last minute. (“There are more jobs in theory,” he explains.) He then did little composing for some time, but has gotten back into it in the last few years. “It’s wonderful to be at a place like Eastman, where performance and scholarship are so intertwined – it seems totally natural for music scholars to be involved in music-making.”

The concert will feature a solo cello piece by Bernstein, a set of songs and a larger chamber work by Matt Curlee, a clarinet trio by Headlam, and a guitar quintet (for violin, viola, cello, electric guitar, and electric bass) by Temperley. The pieces will be performed by students at Eastman.