TEARS INTO WINE: a lecture concert on Bach’s Cantata No. 21 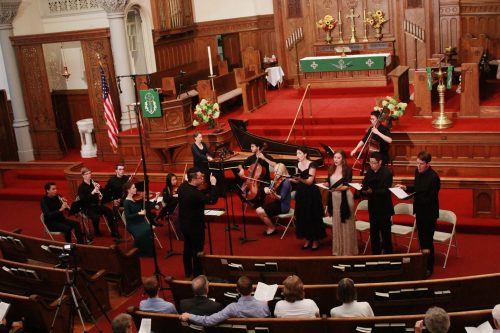 On Sunday, September 25, Eastman doctoral conducting student David Chin (MM’12) will be presenting a lecture concert on Bach’s Cantata No. 21, Ich hatte viel Bekümmernis (I had much grief) at 3 p.m. at Reformation Lutheran Church, 111 North Chestnut Street. The Eastman Bach Cantata Singers and Chamber Orchestra will perform. The lecture concert will explore how Bach expresses transformative theological meaning with progressive musical elements in this cantata.

Cantata no. 21 is unique in comparison to the other cantatas, as it went through multiple revisions and was performed more extensively than the other cantatas during Bach’s life time. It was first performed in Weimar in 1714, and it was performed again in Hamburg and multiple times in Leipzig. In addition, it is one of the few cantatas which is cast in two large sections, and therefore it is also one of the most elaborate cantatas that Bach ever wrote.

Unlike the other cantatas, Bach had marked solo and tutti on the singers’ parts. These solo and choral sections clearly indicated in the score, and separate extra choral parts also survive. The soloists for this weekend’s performance are sopranos Liliana Natalie Buickians and Athene Mok, mezzo-soprano Caroline Nielson, tenor Pablo Bustos, and baritone Alan Cline.

Conductor David Chin describes the cantata as “a depiction of a soul’s journey”, hence the lecture concert’s title “Tears into Wine”. He says, “Bach gives each movement a focused theme that describes the current state of the soul and highlights these themes with unique musical elements. On the other hand, he also connects the various movements into a coherent whole by transforming musical ideas throughout the entire work. The progressive musical and theological expressions that Bach is able to achieve through innovative ideas within his conventional practices, and the exceptional structure and length of the work, make this cantata stand out from all the others.” 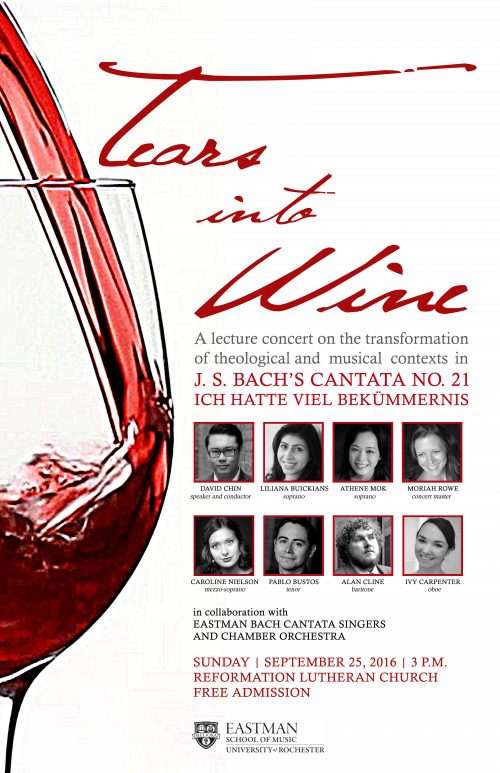