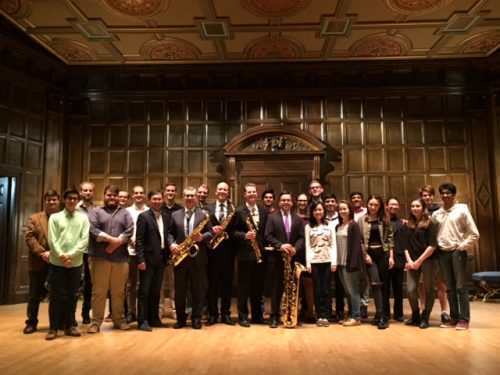 On September 27, 2016, the PRISM Saxophone Quartet, consisting of saxophonists Timothy McAllister, Taimur Sullivan, Matthew Levy, and Zachary Shemon, presented a concert as part of the Kilbourn Concert Series at 8 pm in Kilbourn Hall. They also presented a master class for the saxophone studio and general public earlier in the day. The concert and master class were made possible by the Emily Lowenfels Oppenheimer Guest Artist Fund.

As a student in the saxophone program here at Eastman, I had the privilege of attending the concert and performing in the master class for this incredible ensemble. As each member of the group is an extremely accomplished teacher in his own right, getting the opportunity to be coached simultaneously by all four of them on stage was a slightly intimidating but deeply rewarding experience.

Unlike many traditional master classes, where the teacher digs into elements of the performance, the members of PRISM spent a lot of time talking about concepts of pieces, working together in chamber music, and relating composer’s lives to their music. This proved to be especially pertinent to my group’s performance of William Albright’s Fantasy Etudes, as members of PRISM knew the composer , and even commissioned this piece. Their collective unsurpassed knowledge of this piece was tremendously beneficial, and even in the short twenty-minute coaching we received, we all felt that our concept of the piece had completely changed.

The concert later that evening was a tour de force of high-quality saxophone playing and artistic vision. With an eclectic program that ranged from Renaissance transcriptions to modern works, this concert showcased the incredible ability of this quartet to access a multitude of different styles and musical periods. Their commitment to expanding the concept of what the saxophone can accomplish, by redefining old works as well as promoting the composition of new ones, was on display front and center in this concert.

I know I speak for myself, as well as my entire studio, in saying that we are so thankful that Eastman brought this incredible ensemble to school for the performance and master class. We learned so much through their teaching and playing that we will be thinking about for a long time to come.