Debussy in Wartime: Eastman musicians collaborate in “Scarred by the Somme” 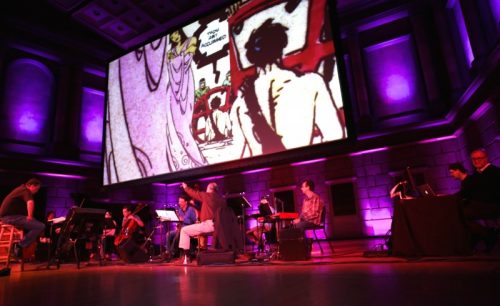 Tonight, September 22, at 7 p.m., in Eastman’s Kilbourn Hall, the Rochester Fringe Festival presents Scarred by the Somme, the latest production of Table Top Opera, inspired by the centennial of World War I and the music of Claude Debussy. Dan interviewed Eastman Professor of Music Theory Matthew Brown, one of the founders of Tabletop Opera, about this unique production.
Tickets are required

What exactly is the Tabletop Opera?

Well, we started out in 2012, when the Eastman School of Music decided to celebrate the 100th anniversary of Claude Debussy’s birth. I work on Debussy, and they asked me what my recommendations were for it, and to talk about pieces that would be performed. His opera Pelléas et Mélisande came up, because it’s his most important piece.

I was told that there was no way that they were going to put it on … and I was a little miffed. And so I thought, “Oh, there’s got to be a way to do it.” I had come across a comic book version of it, and I got hold of the comic book artist [P. Craig Russell]. I thought, if I’m not going to stage it, I’ll show pictures from the comic book, which eliminated the need for singers, because (the characters) have speech bubbles. So I thought, “If I don’t need singers, I don’t need an orchestra either.”

I pick a group of my friends who played well together, whom I knew would work. I picked a fairly diverse group of instruments; I knew we weren’t going to have many rehearsals. I picked people who were either fantastic sight-readers or could improvise and make it up; as we were arranging Debussy’s music, it didn’t matter.

We ended up having one of our keyboardists conduct it, because it was a little tricky to do a 90-minute piece in three rehearsals without a conductor. That’s how it happened.

We were always primarily a mixture of friends or close colleagues, and the instrumentation is as much determined by the group of people [as any other factor]. So we have two keyboardists — Albert Kim who plays piano, and Dariusz Terefenko who plays organ — because we like to have two different sounds because we do large orchestral pieces. The organ gives you lots of options [and differences in timbre].

We also have J.B. Van Demark (on double bass), who’s an old friend of mine; the sax player is a colleague of mine whom I taught for a while at Louisiana State University, and I played in some bands with him too. He’s an old friend who likes to do crazy things. Then we recruited cellist David Ying, who’s a former student of mine; [trumpeter] Jim Thompson is an old friend … We find groups of people who don’t mind doing something a little crazy.

Though the pieces themselves are quite serious, there’s something about really absurd about doing an opera with no singers with comic books and a handful of [musicians] on the stage.

The other thing about it is that we all feel that classical music sometimes fights itself, and has to find new ways to present pieces of music. I talk about how much fun we have, but the pieces tend to be very dark pieces; all the operas we’ve picked are dark [Table Top Opera has also presented its version of Richard Strauss’ Salome], and the Fringe shows cover dark material … Race relations, child poverty, and mortality, and now World War I. These are dark topics, and we treat them very seriously, but we think that there’s an opportunity to introduce people to more emotionally difficult pieces using other media, like pictures and sound effects.

Our shows look like movies, but aren’t exactly. There’s some prerecorded video, but most of it is processed live on the computer. We do it that way because we don’t have any rehearsal time. When you make a movie, you shoot the film, and they hire an orchestra, and there’s a guy with headphones and a click track. But we don’t have a conductor, so we can’t do it that way.

What we would do instead is load pictures into the computer, and we trigger the pictures in time to the music, so the musicians just play their hearts out. They’ve seen what we’re going to show, they know what it’s about and they can participate in making the visuals, but when they’re on stage, they just show up and play, and it works.

So what exactly do you do?

We need people to trigger the computers, so I’m one of those guys. There are two of us that do that. It sounds funny, but with an ensemble that only plays two or three times a year, to raise money, to advertise it, since our shows are very technologically dependent, can take up a lot of time.

For the Somme show, the other tech person, Chris Winders, and I picked the scores, edited them and arranged them, then we put them into Sibelius [a composition software program], and output scores and parts. That takes months. Scarred by the Somme has 400 pictures that have to be cropped, processed, and sequenced. We also make t-shirts and posters, we keep a website, and all of that has to be done. That’s everything I do with Chris. We also loop in my friend Emil Holmgren, who’s a religion professor and comic book aficionado at the River Campus; we run that part of the performance.

We try to keep it so seamless that the players only have to focus on playing, [so] there’s nothing else that they have to do or think about.

What instrumentation are we going to see at Scarred by the Somme?

We’ll hear the two keyboards, cello, double bass, alto sax, and trumpet. We also have sound effects. We’ll start the show with two pre-recorded sections, and we end with a recorded section. They’re pieces by Debussy that have been radically transformed electronically and they’ve been scored by Chris.

The first one is a ballet that Debussy wrote just before World War I, and Chris has arranged it in a Hans Zimmer action movie style. But it’s literally the same notes as the original, but you would never know it’s the same piece if you’re not listening carefully.

The final piece is a Debussy piano piece scored for orchestra in Sibelius, and to make it sound nostalgic, we put it through a filter that makes it sound like a wax recording from 1917.

Chris will do also be doing a lot of sound effects through the show. We’ll be triggering live from two tablets, and a big computer.

What led you to doing this specific program?

We do two kinds of shows. We do comic book operas – we’ve got another one in the process – and they’re interesting, but the music and pictures are given to you. You have [to give a] shape to them and score them, but this is a bit different. We decided with Fringe shows that we would pick progressive, social issues.

The first one, [which] we did two years ago, was on the race riots of 1964, and last year we did a show on child poverty and child mortality. For this one, we picked the 100th anniversary of the Battle of the Somme, and it has a mixture of autobiographical issues for me. On our poster, that’s my granddad’s 1914 enlistment photograph. He served at the Somme, and so I knew him very well, and I thought, “No one is really doing anything for the War [centennial of World War I] over here,” but it’s a big deal back in my home, England.

I work on Debussy, and Debussy was about my age – mid-fifties – when the war was going on, and he wrote a string of very interesting pieces. The war affected him profoundly. People think of him as being a patriotic person; he was, but most of the pieces he wrote were for aid organizations. His father was a Communard, and was arrested, his mother was poor with many kids, and she had to petition the government to get her husband out of prison. The idea of [Debussy’s] writing for orphans, and writing a fundraiser for the wives of serving soldiers … The violin sonata he started writing during the [Battle of the] Somme, and he finished it in the next year. The premiere was performed at a fundraiser for blinded soldiers, and Debussy’s last two concerts were for victims of the Somme. I got thinking about how Paris was the center of the Allied war effort, and I thought about what Debussy would have seen around Paris, while he was writing this piece. He couldn’t fight himself, he was too sick with cancer.

I show pictures of soldiers that had been taught in Paris, to negotiate Braille. They also did facial reconstructions for soldiers, and hired artists to make molds and paint them. Paris was a center for prosthetics; they taught soldiers how to walk and live again. Of course, there were a lot of funerals. He lived in an area where he would have seen a lot of funerals. He would have heard the funeral processions everyday. That would leave a mark on you.

War affects an artist, especially one that can’t serve, but wants to be part of the effort. There are a few allusions to Afghanistan and Iraq [in Scarred by the Somme], because those problems are universal. We picked pieces that bring out that story: Debussy the humanitarian.

What do you enjoy most about playing at Fringe?

I’m from Britain, so the Edinburgh Fringe Festival is a big deal to us. What I think of with Fringe is avant-garde; I think of people who are able to challenge the normal ways of doing things, either politically or artistically. What I enjoy about Fringe is the opportunity to play the kinds of concerts that I couldn’t normally play. We try to embrace that by picking topics that are difficult.