An Eastman Summer by the Numbers 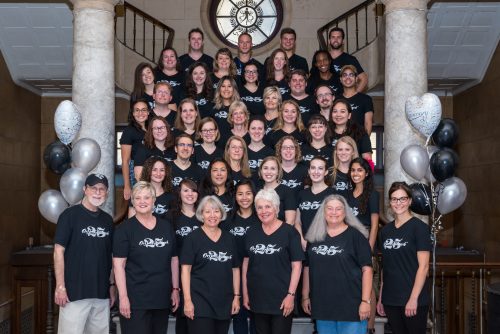 Summer@Eastman packed an amazing amount of music, study, and fun into just 40 days! Here are some numerical highlights of the season:

Summer students came to Eastman from 35 states and 9 countries.

Students ranged in age from 10 to 81 years old.

The Orff Schulwerk Teacher Education Course celebrated its 25th anniversary at Eastman this year! The program has been led by Director Donna Brink Fox and the same 4 faculty members for all 25 years; this year’s classes had 37 students from 6 different countries.

9 is the number of instruments used by students during the 5-day Alumni Organists Retreat (8 organs from Eastman and churches all over the city, plus Eastman’s pedal clavichord).

An orchestra of 40 saxophonists performed Respighi’s “Pines of the Appian Way” as the finale for the American Saxophone Academy’s student concert: 10 soprano saxophones, 10 altos, 10 tenors, 8 baritones, and 2 basses all fit onto the Hatch Recital Hall stage at once!

16 is the number of singers in Voices, the professional choir-in-residence for the Choral Artistry and Advanced Choral Conducting institutes.

$100 is the tuition discount given to Eastman alumni who register for a Summer institute.

495 is the number of singers counted at this year’s Summer Sings (four weekly community choral readings open to the public, led by William Weinert and Summer choral conducting students).

12 is the number of bassoonists that performed Frederic Rzewski’s “Les Moutons de Panurge” (1968) to close out the first season of the Eastman NewBassoon Workshop.

Though Kilbourn Hall was closed all summer for renovations, the shows still went on: Summer@Eastman presented concerts in 14 different venues at Eastman, Keuka College, and around the Rochester metro area.

360 is the estimated number of croissants eaten this June by the 12 students in Theory and Analysis of Contemporary Music: Study Abroad in Paris (assuming one croissant per day per student, for 30 days; no word on how many of those were chocolate or almond).

15 of the 17 students in this year’s Orff Schulwerk Level III Teacher Education course have completed all 3 levels of Orff training at Eastman.

30 is the number of variations on La Bergamasca improvised by a continuous chain of students (6) and faculty (2) at Classical Music on the Spot’s final recital. Students in the class practiced on 4 different instruments: modern piano, harpsichord, fortepiano, and organ.

1510-1515 is the approximate composition date of the (anonymous) vespers service performed by students in the Singing Gregorian Chant and Renaissance Polyphony class’s final concert.

The 48 students at Eastman@Keuka gave 10 concerts in 13 days, went on 3 kayak/canoe trips and 1 hike, and enjoyed 2 bonfires with singing and “enough s’mores to feed a small army” (8 boxes of graham crackers, 96 full-size Hershey bars, and 8 bags of marshmallows)!

60 is the number of performances on this year’s Summer concert calendar. Admission to 33 of those concerts was free.