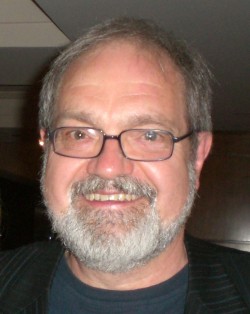 Professor Harold Danko has been on the faculty of the Eastman School of Music since 1998 and served as Jazz Studies Chair from 2002 to 2011. Prior to his appointment at Eastman, he served on the faculties of the Manhattan School of Music, the New School/Mannes, Hartt College, and other institutions. Beginning his piano studies at the age of five, Harold became serious about pursuing a career in jazz at the age of fifteen, when he commenced studies with Gene Rush in Youngstown, Ohio. After graduation from Youngstown State University and a stint in the U.S. Army band, Harold landed the piano chair in Woody Herman’s Thundering Herd, which launched his career as a much sought after jazz musician. He also developed a reputation as a respected jazz educator in New York City and throughout the world.

Currently at Eastman he teaches jazz piano, directs the Jazz Performance Workshops, and heads the Eastman Jazz Trio and Quartet. The group released its first CD in 2003 and continues to perform in the region. In addition to his own educational video, Jazz Keyboard Techniques, available only in Brazil, he can be seen and heard on video performances with Gerry Mulligan, Chet Baker, and Lee Konitz.

Harold’s featured column, “Solo Piano”, appeared in Keyboard magazine for more than five years, and his keyboard improvisation method, the Illustrated Keyboard Series, is a widely used reference work. In 2007 he received a Bridging Fellowship to do research in the University of Rochester Linguistics Department on the relationship of speech and music, and continues to advise students who are pursuing this line of research. Harold has won ASCAP awards yearly since the early 80s for the value of his catalog of original compositions. He has also just returned after touring for a month in Italy with saxophonist Gigi DiGregorio and other musicians from the Torino-Milan area.

What was your path into teaching?

I was in Ohio and studying jazz with Gene Rush, who was also a student at Youngstown University but considerably older than me and more established.  He was going to work in Washington, D.C. and had about thirty or forty students in all. He told the parents of about twenty of his students that I was just as good as he was, because he just wanted to leave town. About fifteen stayed with me, and most lasted for a while.

I was thrust into the deep water of teaching and playing some gigs so I was able to pay my way through school. School didn’t cost that much so I was even able to buy a grand piano, and I said “This beats whatever other students do during the summer.”  I had spent one summer working at a steel mill with my dad, and it was a revelation about how I didn’t want to do that, and I developed great respect for my dad for working that hard. I think he did that as a lesson to me: “Don’t do this, you can do better than this.”

I found that teaching was easy enough after a while. I didn’t know what I was doing at first, but I got some things together and saw what I could do. As I progressed through college and learned more about classical music I became a stronger teacher, and just always taught.

It became more natural to me like a comfortable way to live, and it paid pretty well. When I came to New York I just continued the same thing. I would always teach on the side and eventually I got calls from a few universities, from schools in the New York area asking me to teach a student, or a student would call me and ask to do an independent study. The shorter story would be that Manhattan School of Music offered me a small number of students in 1984, so I became a part of the initial jazz degree program there.

I did that for about fourteen years, as well as some other schools in New York, and then I got a call from [former Eastman saxophone professor] Ray Ricker, for whom I did some educational recordings in the late seventies, saying that there was an opening at Eastman.

I said “Hmm,” and checked it out.  I interviewed and eventually ended up coming to Eastman in 1998, and have been here ever since.

The institutional teaching started with Manhattan, because before that I just taught at my apartment.  I would get back from a tour with Chet Baker and realize I better get some money to pay the rent. It always balanced itself.

I had very loyal students, students who knew I would be out of town, and when I’d come back we’d continue where I left off. It’s been a part of what I can do pretty naturally.

How did playing with people like Thad Jones and Mel Lewis, Chet Baker, and Gerry Mulligan inform and influence your teaching?

First of all you get respect because you’ve done that. When you’re in an institutional setting you’re accountable for 28 lessons a year. But in New York, I got a pretty good reputation for keeping to the obligation of a certain number of lessons with a student. It certainly adds status when you come back from a tour, and the students like that.

I think I’ve always refined my teaching the best I could. Over the years I came to understand that it’s a contract between a student and a teacher… I realized the amount they would spend in a year, and valued students as clients and really honored that contract. Compare it to some clown club owner who’s jerking me around — for what? The same amount of money as one or two students’ lessons? A student, even as a fairly loyal client, pays me more than this club owner, so I developed that kind of appreciation for my students.

Also, as I’ve stressed a lot recently, when you get your methodology together the student comes to respect that methodology. I think that’s what I got from my own learning process, and there’s a certain methodology that I developed over the years. They can respect or not respect me, but as in traditional classical studies, there’s a process that you go through and it produces results. It’s like that with jazz too; knowing your modes, etc. You can be some guy who says it’s “creative” and whatever, and I say “good luck” if you’ve got a little genius, maybe. As you compile everything you’ve learned and develop it methodically you can pass along the knowledge in an orderly sequence for your students.

With college kids – I realized this a few years ago while presenting this to administrators about the trust that students must have in their private teacher: an undergraduate who takes 28 lessons a year is going to study with you 112 times. As much as it’s not cost-effective, if those students want to take 112 private lessons with you, you are very valuable to the institution. It’s the methodology that keeps them coming, not just the cult of personality that fades after they get tired of the Chet Baker stories, if that’s what Is going on in the lessons.

Did you develop this sense of methodology from other Eastman teachers or the “Eastman method”?

I’ve been here for 18 full years, so I picked up certain things, but I think it just comes from a refinement of what actually works. A certain student will come to me, and I have to think “Oh, I won’t lay this thing on them, I’ll lay this other thing on them, and maybe we’ll get around to it all over time.”

It’s a compilation, and it’s always under review with what I can add that will help. A couple years ago Barry Harris was doing a residency here and I thought “Wow, I’ve got to get that into my teaching.” The way that the students here at Eastman learn about set theory and twelve-tone music is very important. I didn’t know too much about that before I came here but I really try to use that.

Have you played at the XRIJF before?

The last five years or so John Nugent has thrown me into Hatch Recital Hall, since he started [presenting performances] there. I don’t push for it because I know they do a lot of stuff, and how many piano players must want to play that venue? He’s always gracious to me. We have a nice musical relationship and that’s what I appreciate about John; he’s a wonderful musician, and I have a nice friendship with Marc Iacona too, so I think that’s why they throw me in there. [Nugent and Iacona are founders and directors of the XRIJF.]

How does it feel playing at the Jazz Fest?

This is a great jazz festival, a truly amazing thing. And I didn’t have my bets on it in the beginning. I was a bit skeptical I have to admit. I wasn’t sure if this city could support as major a Jazz Festival as they wanted to do, and the answer of course is “Yes!”

The county and the region are behind it. I’m over the surprise that it took off the way it did here, but I’m delighted too. It’s done a lot for the jazz program.

At the beginning people thought I had a lot more to do with the Jazz Festival than I do, so they think that I book acts here. I’m in charge of the three student groups from Eastman on the street on the Six o’Clock Stage, that’s my role.

It’s given a lot of priority to the jazz department here, and we look good. There’s a follow-through too. The slogan and the t-shirts that say “Great jazz continues at Eastman” — I can claim a little bit of credit in the beginnings of that. I wanted to stress that this is what Eastman does all year. That would be a residual effect. There’s more turnout to our concerts througout the year; even when we don’t have a guest artist we get two, three hundred people in Kilbourn. The Jazz Fest and the little residuals have given Eastman Jazz a much bigger profile. 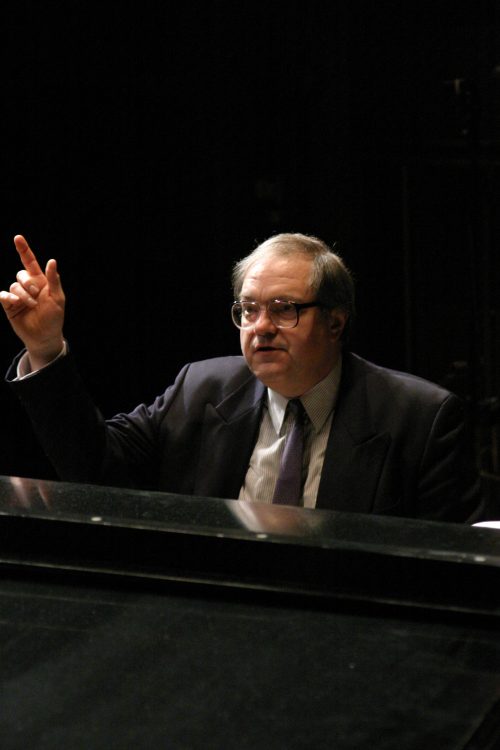