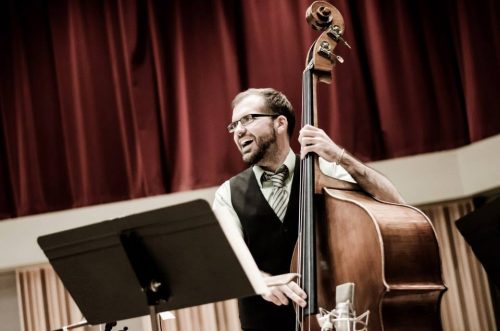 The 2016 Xerox Rochester International Jazz Festival (XRIJF) opens tonight, June 24, and runs until July 2. Among the hundreds of musicians gathering for this major musical event are many Eastman faculty members, alumni, and students. Free-lance writer Dan Gross will be blogging regularly during the next nine days with reports and interviews highlighting Eastman’s involvement in the XRIJF. Dan begins with an interview with Eastman alum and current student, bassist Danny Ziemann.

Danny Ziemann (BM ’12) is not only a rising star bassist; he’s a teacher at the Eastman Community Music School and at SUNY Oswego, and also author of The Low Down: A Guide to Creating Jazz Bass Lines, which received glowing reviews from Larry Grenadier, Rufus Reid, and John Clayton. Danny is playing a handful of gigs in this year’s Xerox Rochester International Jazz Festival. You can hear him playing with Lorna Reid Friday night at 6:45 p.m. and 8:45 p.m. in Christ Church opening the “Made in the UK” series; “slinging some rock and roll,” in his words, with Rochester group Roses and Revolutions Saturday at 7 p.m. and 9:15 p.m. at the Little Theater; and finally with Jumaane Smith on June 29 at 6:15 p.m. and 10 p.m. at Max of Eastman Place. Ziemann is going back to Eastman for his master’s in music education in the fall, and while maintaining a busy schedule with teaching, his own gigs, and touring internationally with pianist Gordon Webster, he is releasing the next book in the Low Down series.

Let’s start with your Eastman and gigging experience. You graduated from Eastman not too long ago. In your time at Eastman/ playing out as a student and now transitioning into being an independent student, what do you look back on as say: “What did I pick up from Eastman?”

There’s a few ways I can answer that. One is having to go through a curriculum that is so focused and some of it so linear. When you’re practicing your music and your instrument, that’s a linear process; you’re trying to get from point “A” to point “B” with everything that you do and continually push in one direction.

When you’re in high school and you’re taking a math class, yeah that’s linear, but when you’re doing that in music school, where everything is really highly focused, you’re not used to thinking that way. You have to excel in your studies. Eastman is a very academically intense music school, and you have to do that while still practicing your instrument and making sure you’re prepared for ensembles, lessons, and classes … Just the fact that I had to split my focus amongst a number of things that are musically related, but not necessarily in my wheelhouse, prepared me for being high-stress situations where I have to think critically on my feet and being able to balance things out. It showed me I was capable of handling a lot at once.

Second, because of my private teachers, like Jeff Campbell (Professor of Bass in Eastman’s Jazz and Contemporary Media Department) and working with Chris Azarra, and John Fetter especially (Professors of Music Teaching and Learning); they taught me how I learned. This is the biggest thing a teacher can do for you, so you can continue to have a system of educating yourself even after you’ve graduated.

Jeff, instead of telling me what to do, showed me options, and helped me to develop a framework to help me make subjective music decisions. He helped me establish a hierarchy for what I found important in my own music, and how to distill the essence of someone else’s musicianship, by listening to records and playing with them … That skill was probably the most important after graduating, [including] learning to be empathetic in a musical situation: things like showing up on time, being a good communicator, and working with other personalities, especially when you’re with the same people over and over again when you’re in a group. There has to be some diplomacy, because especially when you’re out in the real world, you’re getting paid to be there … especially when you’re playing with different people as a freelancer. 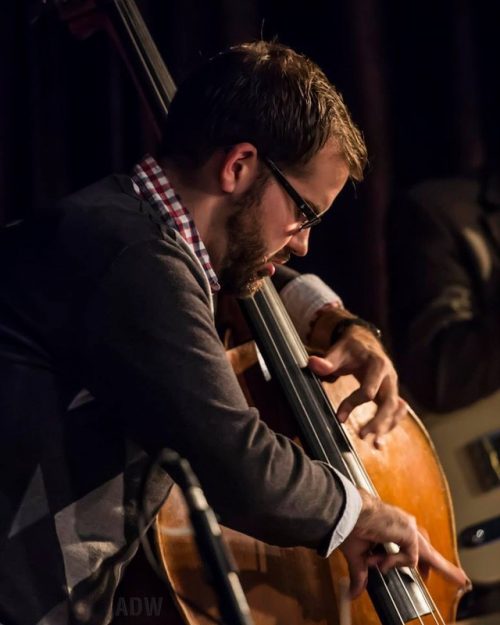 These sound like life lessons too. Did these lessons push you towards pursuing education?

First, everyone will have to be an educator in their life, whether it’s the role of a parent, or doling out advice to your friends … We’re always educating, and we’re always students, that never goes away, and the best people are saying that they’re just understanding what they’re doing, always learning.

I’ve been surrounded by so many inspirational people, (and) so many great teachers, and maybe even some examples of how I wouldn’t teach. The most effective part of teaching is having empathy for your students’ needs and also being a really effective communicator… Telling someone to do something isn’t teaching them, and being surrounded by mentors and advocates inspired me to be a teacher; especially in jazz, since there’s some pushback from people who don’t think it belongs in a classroom.

There was a model for that (learning by listening to records, playing out, mentoring) sixty years ago, and now we don’t have that same institution in place. The only way that it can really be preserved is an academic situation. One of the things that gets me really into teaching it is the fact that I have a lot of playing opportunities, and I have means of teaching through teaching at Oswego, and I love it… And one of the things I found was taking my paying experience and channeling it into what’s actually important, and what you need to learn and understand to be a functional gigging musician.

Now that I’m established as a teacher, I want to establish a precedent for learning jazz in the most musical way. [In the classical idiom] you have Suzuki, Clark studies … and we have to address jazz as a serious academic pursuit… I try to make sure that I’m teaching this thing that I love and getting other people to learn it, through the lens of my playing opportunities. I think there needs to be more of that, or else jazz could become a museum piece and it could become archived and studied in dusty textbooks.

With all the books and teaching, I’m trying to create community for people to learn with the most integrity possible.

It sounds like you connect so many things in your life. What’s the difference between playing a gig in Rochester, touring internationally, and the Jazz Fest?

Playing in Rochester … I value it so highly. Some of the best music I make and will ever make is in Rochester. When I’m playing in Rochester, I’m playing with people that I look up to immensely. I can’t name names because there are so many great people here in town. But they know me on a personal level, and I have to deliver; the level of musicianship is going to be incredibly high, and we’re sort of playing our musical friendships, not treating it like it’s a job.

When I go to Spain [with Gordon Webster] it’s the opportunity of a lifetime, but it’s more work than it is anything else. I drive to the airport, in Toronto or New York, I do an eight-hour flight, end up in a place that’s a six or seven-hour time zone difference, get off the plane, immediately get to the hotel, maybe nap, shower, maybe eat lunch, slap on a suit, and play a five hour gig. The goal there is to show up to the gig, in a normal headspace as much as you can, see the guys for the first time in months, and maybe meet a new person you’ve never played with before … and dial it in and play the best gig of your life. That’s a much different experience from showing up at a wedding; it’s a different mindset. It’s a lot more work than people think.

At the Jazz Fest, it’s something else. For the Lorna Reid show on Friday, I was recommended by a drummer in Toronto that I played with once who knew me from some other friends. The first time that we’ll play will probably be at our sound check on Friday. I have to go in, and there’s a certain rapport I have to establish, but most importantly, I have to be myself. I have to have fun, because that’s part of my personality, but I also have to be serious and exude it, since I don’t share the same rapport with them that I do with these Rochester musicians.

I’m going to do exactly what I do in my gigs in Rochester or in Spain, and that is to contribute to the music and to do it as positively as possible … Whether it’s Chick Corea, (Bob) Sneider or (Bill) Dobbins, the job has to be done the same way, and that’s the nice thing about being in town here. I have the opportunity to play with some of the most artistic musicians that I can, so that when I go to other places, it’s a continuation of what is already a stable part of my career. 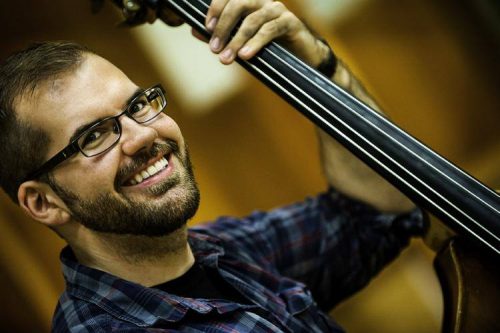