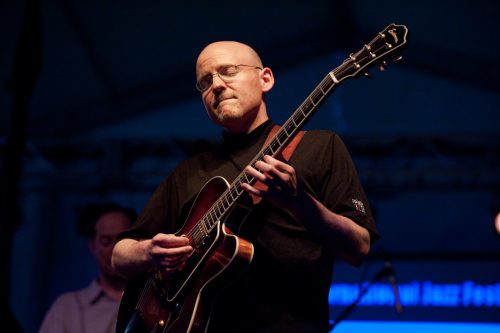 The 2016 Xerox Rochester International Jazz Festival (XRIJF) runs from June 24 until July 2. Among the hundreds of musicians gathering for this major musical event are many Eastman faculty members, alumni, and students. Free-lance writer Dan Gross will be blogging regularly during the next nine days with reports and interviews highlighting Eastman’s involvement in the XRIJF. Here, Dan interviews one of the pillars of the festival, Eastman guitarist Bob Sneider.

Guitarist, Eastman faculty member, and political science graduate from the University of Rochester (BM ’93) who took classes at Eastman, Bob Sneider continues to earn his moniker as the “hardest working man at the Jazz Festival” as he closes out each night of the Festival with jam sessions at 10:30 p.m. at the Holiday Inn Rochester Downtown. In addition, Sneider is hosting and moderating the Wegmans-sponsored Jazz Workshops for Young Music Students, which this year will feature guest artists from XRIJF’s “Made in the UK” series. Sneider will also be performing with Curtis Stigers on July 1 at 6 p.m. and 9 p.m. in Kilbourn Hall, appearing on stage with his brother John, a UR and Eastman alumnus who plays trumpet for Stigers. You can also hear Bob play with trumpeter Mike Kaupa on June 25 at 6 p.m. with the Eastman Community School combos.

You said your advanced degree was in “music experience.” While you were at UR, you took some music classes at Eastman… But I’m hearing no education background. What prompted you to get into education?

Before I ever became a faculty member at Eastman, I was still on the road touring with well-known Eastman alum Chuck Mangione. I had been asked to be a part of a couple of summer session programs (with Eastman). One was their jazz studies program, and then another program which was run at the time by Ray Ricker. The summer sessions I guess must have made an impression, and then it was that fall that they asked me to audition to be the jazz guitar teacher at Eastman. They were specifically looking for somebody who could immediately fill the role and teach University of Rochester secondary students from the arts and sciences who wanted lessons for credit from Eastman. At that point, classical guitar was a very new entity at Eastman, and jazz guitar had not been part of the curriculum, and the undergraduate program was just in its infancy, maybe about three or four years old.

But they had to attract guitar students, and they wanted to begin the process of recruiting jazz guitarists, and they looked at a possible combination of somebody that would want to give back to the (Eastman) Community School, which in those days was the Eastman Community Education Division. I think we all agreed eventually that the Eastman Community School was a much more inviting name!

Right around the same time I was offered a teaching position at Alfred University, and I started to think that I could really make a go of teaching. I loved teaching privately, in between times when I was on the road, and I figured how different could it be? Knowledge is knowledge and teaching is teaching, and that’s the way I approached it.

Luckily I got the job at Eastman in 1997, and the job started with them saying “We have a guaranteed half hour a week for you.” And I said, “Oh, that’s terrific!” The good news is, after about a year a half it grew into a full time job, between the community school and the collegiate activities.

Looking at everything you do, it really seems like you’ve embraced not just the Rochester music community, but Rochester itself. How much of that developed from your time at UR and taking classes at Eastman, and now as a teacher here, especially getting older and thinking about making a home here?

I think that when you’re in college, there’s the idea that you’re going to escape to a larger metropolis, and the one thing that I did when I was in college is that I really networked with the local music scene. Back in those days, those people who were at Eastman or UR, they had a very insular musical society, and you had to branch out to see how amazing the talent is in the Rochester area … I’m very grateful to say that I have musical alliances that I’m still very actively involved with that were not originally a part of the Eastman/UR family that I play with a lot. I do play with my buddies at Eastman regularly as well, but I got very involved in the local music scene.

When I was a UR student another friend of mine, who is an amazing and now famous singer, Carolyn Leonhart, and I would do a lot of gigs together. In terms of branching out and doing things with the community, she encouraged me to go play with her over at the Ronald McDonald House when it was brand new. I got to see a lot of very neat aspects of the community.

When you’re out there performing a lot, you meet a lot of interesting people; not just musicians, but some of the local people, and they become good friends of yours. I think of my biggest successes of remaining in Rochester is really branching out beyond the institutional element of the music world, and I encourage all my students to do the same. That’s how you develop your business skills, how you develop your interpersonal skills, and how you learn to advocate for yourself and make opportunities for yourself. I think that’s a big part of my success.

Do you actively pass on to your students the appreciation and understanding of the business side of music?

Absolutely, yes. It’s 2016, and you can’t just have a Facebook page, and have a nice demo, and say: “Hey, I’m really good at what I do”, and then wait for the emails to just start piling up with opportunities to perform and teach. You’ve got to get out there, get into the community. You have to be an active participant in the music community so people know about you.

I’m very involved with local public schools. That definitely helps my visibility in the community, and it wasn’t necessarily a business decision, but one of the things that helped out was when I started telling local band directors: “Hey, I’m not travelling anymore, I’m teaching at (Eastman). Hey, you got a talented kid? Send him/her on over to take jazz guitar lessons.” 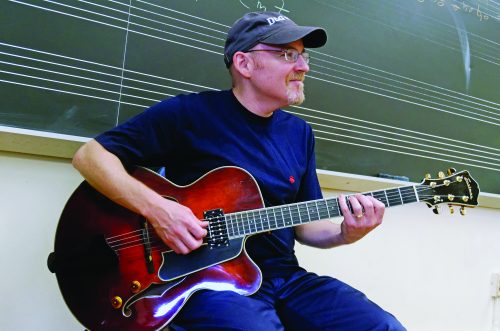 You’re getting yourself inside the community. How does it feel being out at a normal Rochester gig versus being in the Jazz Fest?

The one thing that I can say — whether I’m leading the jam session or whether I’m backing up one of the artists at one of the bigger venues – is that musically, I treat it exactly the same. I think the one thing that is interesting about the Rochester market is its extremely knowledgeable jazz audience. They know a lot about the music, and they have very specific tastes.

Something else that’s interesting about Rochester is because we’re not New York, Chicago, or L.A., sometimes people come and play at Hatch Hall or Kilbourn Hall, and they think: “Oh, my gosh, I can’t believe I get to play with ‘so and so’, it’s really amazing.” And I think: “Every time you play here, it’s really amazing.” I think they’re surprised that we’ve played with each other before. One thing that people are surprised about is just how well-connected and well-positioned the people are in the jazz department at Eastman, and we’re really meshed into the world and the jazz community at large.

There’s times when there’s somebody who’s in at the Jazz Festival that you’re like, “Oh, my gosh, George Benson is at that end of it, that’s crazy.” There’s still that little kid inside of you that has your musical heroes, and I can’t believe that someone like Pat Martino is sitting and listening to me play. This is truly unreal.

When people come through the Festival, it’s like a big homecoming, which is really neat and it’s a lot of fun. I think the difference at the Jazz Festival is that there’s a different energy level from the community. I want to say that whether I’m playing with my trio at Kilbourn Hall or whether I’m playing at a local venue, I treat it the same. But the one thing you can’t treat the same is the energy level and excitement coming from the audience; it definitely impacts everybody’s performances.

For them, it’s a cutting edge, really intimate encounter. Like last year, twelve-year-old Joey Alexander sat in with my band and people were mesmerized; not only the people in the Rochester market, but also Festival headliners were leaning over the piano observing the virtuosity of this young, rising star. You can’t help but feed off the energy from the crowd.

If someone were to listen to you play at the jam session or with Mike Kaupa, what can they expect from Bob Sneider?

I try to be intentionally witty on the microphone. Yup, my wife and children usually don’t understand my humor, but there’s only going to be about five people in the audience who will laugh.

“Jazz Festival Diary #3” will be Dan’s interview with Jeff Campbell, renowned bassist and professor of jazz studies at Eastman.