Food for “Improvisation-Hungry Musicians”: Johnandrew Slominski Talks about Classical Music on the Spot 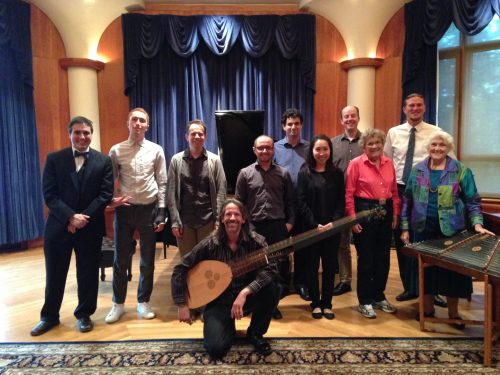 Members of the 2015 Classical Music on the Spot class, with instructors Gilad Rabinovitch (wearing a blue shirt) and Johnandrew Slominski (wearing a tie), both in the back row

Eastman Assistant Professor of Theory Johnandrew Slominski is the creator and director of one of Summer@Eastman’s most unusual offerings, Classical Music on the Spot: Eighteenth-Century Keyboard Improvisation. This week-long institute teaches a small group of keyboard players about the art and craft of improvisation, using 18th-century pedagogy and practice methods as a guide; Professor Slominski designed the course and developed the curriculum himself. The class has inspired a devoted student following, with several players returning year after year. Here, Johnandrew answers my questions about his history with improvisation and the creation of the course.

Talk a bit about your musical background. How did you first get inspired to explore improvisation?

I have always been an improviser: from my earliest musical memories to the present day I have enjoyed the creativity, freedom, and play that come with improvisation. As a child I experienced tremendous joy from improvising in a variety of styles; it was an ordinary activity for me to listen to certain recordings (Bach organ works, 1960s jazz, and everything in between) and attempt to imitate what I heard. Some of these imitations were more successful than others, to be sure, but the sentiment of flexibility and, in a sense, learning to “speak” in a particular language at the keyboard has remained with me.

How did you decide to create an improvisation class? Who are your improvisational heroes, and where did you look for pedagogical guidance?

It wasn’t until college that I realized that what I had always done naturally could be taught to others, and that not everyone improvised as a matter of course. What’s more, I was surprised to learn that many very talented musicians considered improvisation of any sort to be an impossible feat, and that many viewed it as a gift, rather than a skill. I felt then and know now that improvisation can absolutely be taught and learned, that it is not a thrill reserved solely for the few that are initiated, and that it is an essential part of creative, personal music making.

I set to work teaching myself how to teach others to do what I loved. I greatly admired prodigious improvisers who worked in a multitude of styles, including Josef Hoffmann, Herbie Hancock, Stéphane Grappelli, Robert Levin, and Malcolm Bilson, and I was fortunate enough to study with the latter two. As I became more active in the field, improvising in public, speaking on the topic, teaching, and so on, [I would hear] from advanced musicians that, while they longed to be able to improvise, and had heard that it was possible, they hadn’t the slightest idea where to begin. Still more musicians told me that they had always wanted to improvise and for various reasons had been discouraged from doing so—but now they wanted to learn. And so a question was born in my mind: Where could improvisation-hungry musicians turn?

My answer came, in part, through studying the Italian conservatories of the eighteenth century. These institutions [such as Sant’ Onofrio, Santa Maria di Loreto, and La Pietà, all in Naples] taught and influenced some of the greatest composers and improvisers the world has ever known. The Italian school’s influence was pan-European: composers whose work was directly influenced by Italian methods include Cimarosa, Haydn, Beethoven, and Mozart. Improvisation was part and parcel of Italian training. By revisiting these historical methods, as well as utilizing modern-day pedagogy and understanding of musical cognition, I began to craft a pathway for contemporary musicians to “speak” in an eighteenth-century style.

Why did you decide to focus on this particular musical time period?

While one could certainly improvise in any style, I chose the eighteenth century as a point of departure for several reasons. First, musical thought in the eighteenth century has resonated into the present day—it was the locus of a great number of innovations. Second, galant and high classical repertoire is often sufficiently transparent in texture that those with a variety of technical foundations at the instrument can approach the style without undue exertion. Finally, this style in particular has enjoyed fruitful scholarship in very recent years, and there is a wealth of information ready for assiduous students to assimilate.

How did your historical research affect modern-day course content? Was it challenging to put the curriculum together?

The training that took place [in the Italian conservatories] is rather problematic in the sense that master teachers such as Leonardo Leo and Francesco Durante left precious little prose. In fact, what remains of their teaching and treatises is almost exclusively musical examples and incipits; in other words, we know much about what they used, but very little about how.

Reconstructing the “how” is part of the challenge in doing this sort of research. To study how, for instance, Mozart might have studied, taught, and thought using historical evidence, and then to attempt to recreate aspects of that scenario for modern-day musicians: this is very exciting work.

You will be teaching the class this year with two other members of the Eastman faculty, Edoardo Bellotti (Associate Professor of Organ, Harpsichord and Improvisation) and Dariusz Terefenko (Associate Professor of Jazz Studies and Contemporary Media). All of you are tremendously skilled at improvisation, but you work in vastly different musical “languages.” What do you hope your students learn from this creative combination?

I am thrilled to collaborate with my esteemed Eastman colleagues to present the institute this summer. While each of us has different specialties, our interests overlap and complement one another in a way that I think is very exciting. My hope is for students to emerge from a week of study with the experience, confidence, and resources to continue to develop as improvisers.