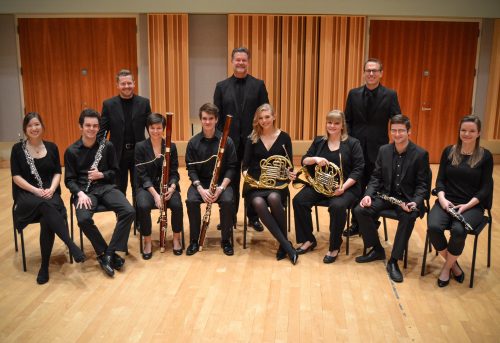 From May 25 to June 5, Eastman Wind Ensemble Harmonie will be touring Germany, Austria, and the Czech Republic, with planned performances in in Salzburg, Vienna, Prague, Pilsen, Bayreuth, and Wurzburg.

A subset of the Eastman Wind Ensemble, Harmonie is a wind octet: 2 oboes, 2 clarinets, 2 bassoons and 2 horns. They meet regularly on Thursdays as an ensemble and lab for winds conductors. The group’s current repertoire includes music by Mozart, Beethoven, Husa, Revueltas, Uhl, Joplin, and Bolcom.

The Harmonie tour started with a grant through the Sister Cities Program to play at the Mozartfest in Wurzburg, starting June 3. Wurzburg is one of Rochester’s “sister cities.”

On the group’s preparation and excitement for the tour, Scatterday said, “The group is extremely motivated and serious about this tour. It will be a great two weeks of travel and performances, in many interesting venues, castles, churches, courtyards, and parks.”

Scatterday continued, “The ‘harmonie’ functioned most prominently during Mozart’s time as a mobile, flexibly transportable ensemble and our aim is to re-create this experience of concertized and social performances. The ensemble’s repertoire is all wind octet original and arranged works. This includes a mixture of classic 18th and 19th century serenades and opera scenes, as well as modern European and American works.”

Assistant conductor Eric Laprade has contributed to the Eastman Blog throughout the year, mostly writing about the performances and programs for the Eastman Wind Orchestra. He will be providing some “live look-ins” to Harmonie’s Germany tour with photos and blog posts while the group is abroad.

The Eastman School is hosting a send-off concert for Harmonie on Thursday, May 12, 2016 at 8 p.m. in Kilbourn Hall. The concert is free and open to the public, and will feature music that the ensemble has been preparing for their abroad performances. 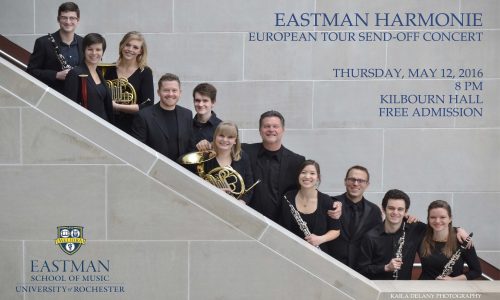