Eastman Saxophone Ensemble performs tonight – and in China this summer 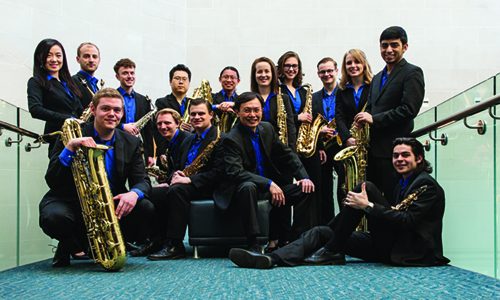 ESP and CKL: the members of the Eastman Saxophone Ensemble with their director, Professor Chien-Kwan Lin

This July, the Eastman Saxophone Project will be traveling for two weeks to perform in China. The group departs from Rochester on July 9 for Shanghai, where they will be performing at the annual Shanghai Sax Summer Camp. The group will be one of the featured ensembles at the Asia-Pacific Band Directors Association in Beijing, performing for the conference’s opening gala at the National Center for Performing Arts. Their trip concludes with performances in cities around Shanghai before returning to Rochester on July 23.

The tour presents itself as the most exciting endeavor thus far for the ensemble, which has quickly become one of the world’s most recognized saxophone ensembles since its founding in 2010. In addition to two full-length concerts at the Eastman School each year, Eastman Saxophone Project has performed at New York City’s Steinway Hall (2011), the North American Sax Alliance Conference (2014), and the Kennedy Center in Washington, D.C. (2015).

Chien-Kwan Lin, Professor of Saxophone at the Eastman School and director of the Eastman Saxophone Project, spoke about the ensemble’s upcoming tour in a recent interview:

What was the inspiration this trip and why did you choose China as the destination for Eastman Saxophone Project’s first international tour?

Since Eastman Saxophone Project’s founding, the ensemble has enjoyed a sizeable following among the saxophone audience in China. Each time I travel to that country, people ask if I will consider taking the ensemble to perform there. After some brainstorming with our supporters, I decided to work on this project beginning last summer. The saxophone is one of the fastest growing instruments in terms of popularity in China, so I also felt that it is important for Eastman to establish a presence early in its development.

Could you speak about the music that Eastman Saxophone Project is preparing for its performances?

We will be performing in various settings throughout the tour, including a hall the size of Eastman Theater, smaller halls for formal recitals, educational concerts for children, as well as informal concerts for the general public. Due to the variety of audiences we will encounter, Eastman Saxophone Project will be preparing more than a dozen pieces consisting of music suitable from concert halls to shopping malls. 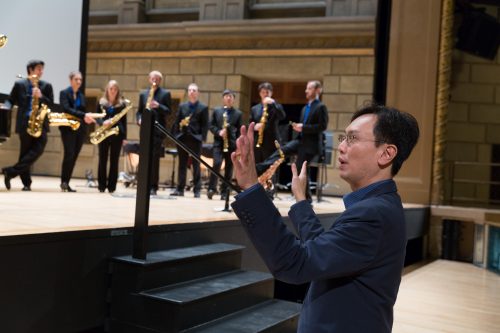 Chien-Kwan Lin with the Eastman Saxophone Ensemble in Kodak Hall

This is undoubtedly a great experience for the students in Eastman Saxophone Project. Could you speak to their level of excitement for the trip and their individual preparations thus far?

It goes without saying that this is perhaps the most exciting trip for many of our students. Several of our members have never traveled outside the country, and the thought of flying halfway around the world to a completely different culture takes on an exotic and mysterious feel to it. I firmly believe that travel is the best form of education, and I am super excited that my students will get to experience it. I also could not have asked for a better attitude from them. There is so much music to learn and memorize during such a stressful time of the semester, and I haven’t seen anyone coming to rehearsals without a smile on their faces.

Coordinating a “cross-the-globe” trip and scheduling performances is surely an exhausting endeavor. Could you speak about the planning process?

I have never taken students outside of the country before, and I had no idea how much work this project entailed. Lots of late night calls to China due to time zones, getting everything translated, visas, and the whole nine yards. But I know it’s all going to be worth the effort. And also through this experience, I have come to know many people who are so passionate about the ensemble on the other side of the world. People like Hong Xia Loomis and our deans Jamal Rossi and Donna Fox have been giving me so much support and encouragement. It’s just heartwarming to see the power of music connecting people. I’m sure the students will experience the same things when we’re there. We just can’t wait to go!

The Eastman School is hosting a send-off concert for the ensemble tonight, Tuesday, May 3, at 8 p.m. in Kilbourn Hall. The program features music from the group’s upcoming tour including arrangements of works by Bach, Ravel, Debussy, Fillmore, Whitacre, Bennett, Mellits, Ito, and Press. Most arrangements are done by members of the ensemble.

Myles Boothroyd, a graduate student in the Eastman Saxophone Project and frequent contributor to the Eastman Blog, will be providing tour updates via the blog while the ensemble is in China.