The Eastman School of Music is proud to recognize its four recently awarded Fulbright scholars: Dominic Giardino, Bridget Kinneary, Bailey Paugh, and Katherine Tepper. The four Eastman recipients are among ten from the University of Rochester that will be pursuing scholarly opportunities abroad.

The Fulbright competition is sponsored by the U.S. Department of State and is designed to promote mutual understanding and peace between the United States and other nations through educational and cultural exchange. It offers college graduates opportunities for career-launching study, teaching, and research abroad. The Fulbright U.S. program awards approximately 900 research/study and 1,200 English teaching assistantship grants each year.

This post features each of Eastman’s Fulbright scholars’ plans during their time abroad and the steps they took towards applying for and receiving their grants:

“My Fulbright award will be supporting a single year of study at the Koninklijk Conservatorium Den Haag (The Royal Conservatoire of The Hague) in the Netherlands. I will be studying historical clarinets and historical performance practice with Eric Hoeprich. While most of my studies will focus on clarinets of the late 18th century, I will also be performing on instruments of the Baroque (chalumeaux and baroque clarinets) and of the 19th century (going as far forward as Brahms). It is my plan to specifically focus on wind ensemble repertory from the late classical and early romantic periods, and to perform these works outside of the concert hall in casual public settings.”

“This Fulbright award is giving me an opportunity that is otherwise impossible in the United States. While there are several schools in the U.S. with thriving early music programs, opportunities to study historical clarinets are very limited. Having the opportunity to travel to one of the world’s most prominent centers of the early music movement, and to learn from pioneers such as Eric Hoeprich, will allow me to learn interpretive skills and a musical language that brings a new (or rather old?) life to music we sometimes take for granted. It is my intention to use these skills and insights to expand our American musical culture, and to work towards legitimizing the performance of all repertories in historically informed ways.” 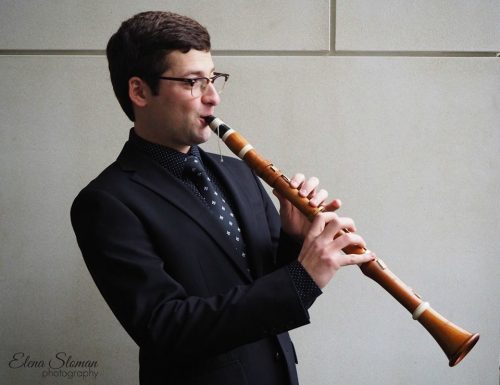 Dominic Giardino with his historical clarinet, which he will be studying during his Fulbright-supported work in the Netherlands

“For nearly a year, I will be living in the region of Brandenburg, Germany teaching English part-time in a school. I am looking forward to exploring the many similarities between language and music education while being immersed in a new culture. During my time outside the classroom, I will be taking viola lessons, taking advantage of a season ticket to the Berlin Philharmonic, and traveling as much as possible. “

“If someone were to go back in time and tell my freshman self (who hadn’t even started learning the German language yet) that I would be moving to Germany after graduation, my response would have something along the lines of “NO WAY!”

“My receiving this award speaks to the passion I quickly gained for the German language and culture. Behind that passion is inspiration from a team of phenomenal professors. So, thank you to Tina Curren for being the toughest grader on my vocabulary quizzes in German 101 (spell it wrong by one letter, it is wrong), and teaching me the discipline needed to learn a language. Thank you to Professor Reinhild Steingröver for yanking me out of my comfort zone and making me read aloud, write, speak, and act in German from the moment I set foot in German 201. Thank you endlessly to George Taylor and John Fetter, my viola and music education professors for supporting me through everything I do and never saying no to any of my crazy ideas. Both of these people were monumental in supporting me as I built my knowledge of German language and culture into my career goals as a violist and educator.”

“I’ll be spending next year studying either in Hamburg with Matthias Höfs or in Karlsruhe with Reinhold Friedrich, depending on how auditions go in June. I’m interested in studying the German trumpet style and sound, which tends to be deeper and weightier than the more French-influenced American trumpet sound. The cultivation of my musical voice through study of German style and sound will give me more musical tools to communicate with, and I hope will allow me to reach greater expressive and communicative potential.”

“I would like to thank Professor Scheie for guiding me through the application process and for reading all my drafts and helping me get from the first one to the final one; Professor Scatterday and Professor Prosser for writing recommendation letters and for all of their help and advice during my time here at Eastman; Professor Steingrover for encouraging me to apply for a Fulbright in the first place, for writing a language recommendation, and for helping me develop my interest in German language and culture through the amazing classes she has taught; and finally Professor Thompson, for writing recommendations, for being so encouraging and enthusiastic in helping me pursue my dream of studying in Germany, and for being such a wonderful teacher and mentor over the past four years.”

“I will be in Berlin from this September to next July, studying international affairs at the Hertie School of Governance and will hopefully doing research in the EU division of the German Institute for International and Security Affairs. My identity as a musician will be far from lost, as music is the key for my community engagement proposal. I plan to teach voice lessons on a freelance basis, and perform as much as I possibly can, with smaller opera companies and baroque chamber groups, and, of course, I will be attending Berlin Philharmonic concerts as often as humanly possible! This summer, I will be focusing on tuning up my German and making musical contacts in Berlin! I am very lucky to have already studied abroad in Berlin, so I know the city pretty well already and I could not be more excited to be in the cultural and political center of Germany for a year!”

“It is such an incredible honor to have received a Fulbright Grant. Just knowing that the Fulbright Commission liked my proposal enough to fund me for a year is very humbling. I am so lucky to be following in the examples of many academic and musical heroes of mine who are Fulbright alumni, including Renee Fleming, Philip Glass and Jonathan Franzen. I would love to thank the Fellowships Department at UR for advising me, and Frau Steingrover at Eastman for being an academic reference and teaching me so much about German language and history. I would also like to thank my two German professors, Frau Balsam for her fantastic formative contributions to my education in the German language and lyric diction, and Frau Becker for her wonderful assistance in my review of German concepts this year. I would also like to thank my applied teacher, Professor Ciesinski, for her incredible breadth of knowledge and support over these five years as a dual-degree student, and my parents for supporting me in pursuing my dream of studying both music and international relations.”