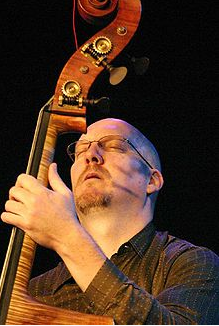 Post and photographs by Dan Gross On April 1, 2016, jazz bassist Scott Colley visited Eastman to talk with jazz students and to perform with them in an Eastman “Jazz Cafe.” Here’s a report from blogger Dan Gross on Colley’s visit.

They seem like a pair out of a movie. A professorial-looking man, with beard, gray hair, and dress shirt, sweater and jacket, and a tall, laid-back Californian with a shaved head and soul patch, united by music, came back together after twenty years on April 1, for a day of teaching, sharing, and performance. Harold Danko, pianist and Professor of Jazz Studies & Contemporary Media at Eastman, and bassist Scott Colley first came together in New York City. Colley was playing around, and looking to find a group to play with. Eventually, he joined Danko’s band. “One of the first bands I played with was Harold’s band,” Colley said during his master class, addressing a packed room. He discussed their time together, when they were recording frequently, in about six-month intervals. Colley would eventually come to play with great artists such as Herbie Hancock, Jim Hall, and Brian Blade, and toured with Carmen McCrae.

In discussing his own music and what he could pass on to students, Colley often discussed his influence both admiring Charlie Haden, and Ornette Coleman. “I just wanted to spend time with him,” Colley said of Haden. Colley, a native of Los Angeles, who in addition to studying with LA Philharmonic bassist Fred Tinsley and attended California Institute for the Arts, studied with Haden as well. Colley commented that many musicians looked at the freer stylings of Coleman and Haden with disdain, but Colley admired Haden’s folk influence and his melodic touch. His own left hand technique reminds onlookers of Haden, as well as his melodic sense and sensibility.

Colley, who has been recorded on over 200 albums, also has made a name for himself as a bandleader and a composer. “It was about that time when I started to compose more frequently,” Colley said, referring to the time when he started to play with Danko. “Improvisation is really spontaneous composition, and learning from now Harold constructed forms, and how people I admired composed … It all became connected.” Colley’s compositions and arrangements are very open, and allow for many textural changes and improvisational freedom, two hallmarks of the free idiom. “His use of vamps and simple chord changes allowed the soloist to not be stuck playing one measure at a time,” said CJ Ziarniak, junior jazz saxophone performance major. He was one of the six Eastman students who performed with Colley at the end of his visit in Max at Eastman Place. The group, which included Billy Petito on guitar, Daniel Sunshine on drums, Sterling Cozza on piano, Brandon Choi on trumpet, and Benjamin Britton on tenor sax, played Colley’s compositions, standards, and compositions by Ornette Coleman. “I felt that all of the solos played on Scott’s tunes had a beginning and ending, and were able to tell a story … Playing with Scott was a great experience. His level of musicality is so high, he allows the soloist to stretch out and take the tune any place they wish to take it.” 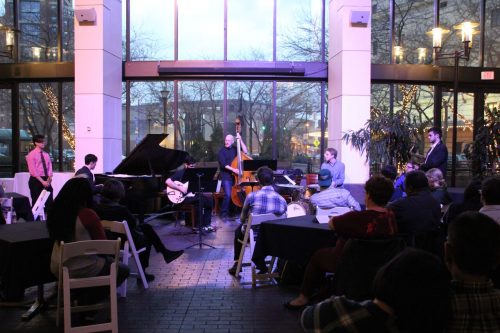