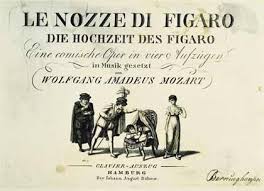 The Eastman Opera Theatre will present Mozart’s Le nozze di Figaro next week at Kodak Hall at Eastman Theatre. The production will be sung in Italian with projected English supertitles and a full orchestra. The performances will feature two rotating casts of Eastman School of Music undergraduate and graduate students. Performance dates and times are listed at the end of this post.

Benton Hess, Professor of Voice at Eastman, serves as Eastman Opera Theatre’s musical director and is conducting Le nozze di Figaro. I had the opportunity to meet with Professor Hess and talk with him about the upcoming performances. Here is the dialogue from the interview:

Le nozze di Figaro is one of Mozart’s most popular operas, if not one of the most admired in the genre’s repertoire. Why do you think that it is?

Generally speaking, we consider the greatest of Mozart’s operas to be Le nozze di Figaro, Don Giovanni, Così fan tutte, The Magic Flute, and Idomeneo. For me, Le nozze di Figaro is the best of them all. I don’t think that there has been an opera quite as perfect as Le nozze di Figaro, before or since. I doubt that there’s likely to be one. If you have a shelf in your house where you keep your Bible or whatever book you hold holy … well, there’s something about this score that belongs on that shelf because it’s transcendentally perfect. We know Mozart was a great composer but people don’t often talk about his incredible sense of the human condition and how the human heart works, and I think he demonstrates that more in Figaro than in any other piece that he ever wrote.

Mozart was working with a new librettist, Lorenzo da Ponte, who deserves a lion’s share of the success because the libretto is spectacular Italian. Fabulous poetry. No one had ever written a libretto before like this, and it came at a very interesting time. Up until Figaro, the only operas that had been performed for the court theatre had been opera seria. The librettos had been about kings, queens, and mythological characters: people that were bigger than life. That’s what people were interested in. Joseph II came to power in Vienna and he didn’t like opera seria. He declared that in the theatre, there was to be only opera buffa, a brand new thing. Composers in Naples had fooled around with Commedia dell’arte stories with characters, clowns, puppets, and stereotypes and setting those stories to music. This is what became opera buffa and that is what Joseph II liked and decreed; that was all that was to be performed.

Mozart, who is used to dealing to kings, queens, and mythological characters, those characters together with commedia dell’arte characters and what you get in Figaro for the first time is real people. This is really the first time we have real people in an opera: people the audience can identify with. People whose difficulties on a day-to-day basis are just like yours and mine, and he made magic with it.

For those who have not experienced performing in an opera production, can you walk us through the musical preparation process?

As soon as we get back to school, we immediately start musical rehearsals. We have four piano assistants that are assigned to the various shows. At the end of the rehearsal period, we have a memorized sing-through for each cast. Each cast sings for other as well as some voice faculty.

Then comes the staging process, which takes several weeks. About halfway through the staging rehearsals, I begin the orchestra rehearsals. In Figaro we have three strong casts: the two main casts and a cover cast. Because I have the covers in orchestra rehearsals, it helps the pit musicians understand the vocal parts, which in turn, makes the entire musical preparation process go faster. We will have a Sitzprobe where the cast members sing with their scores with the orchestra. Then we will move into the theatre. We have two rehearsals with the orchestra, (one with each cast) followed by a day off, and then its opening night! It’s a template: every show is exactly the same, because it works.

What was your inspiration or at least some of the deciding factors that led you to decide on producing this opera with Professor Daigle?

The first thing is deciding what the titles are going to be during the previous academic year — we propose our titles to the voice faculty, and they give us the OK. We don’t cast the operas in our heads ahead of time, but we do try to choose titles that we know we can cast with the students we have and we delay the announcement until we have an idea of what students are coming in.

There’s another factor here: no serious opera student should leave without learning Le nozze di Figaro. Fortunately, the opera has a big cast and chorus so a lot of people get to participate. I think it’s important that everyone has the opportunity to do a period piece … no girl should leave Eastman without having to sing opera in a hoop skirt. It takes some figuring out. Likewise, no man should ever enter the professional world without ever having to carry a sword around … otherwise he’s going to be bumping into everyone. That’s what usually happens the first time.

Figaro is one of the more frequently performed operas, evidenced by how many times it’s been produced at Eastman. How are you bringing vitality and excitement to something so popular and well known both to the performers and audience?

I don’t think we have to work at it quite frankly. I think Mozart did all of the work for us. If you just do what Mozart asked for, you’re already ninety percent there. Once upon a time I was doing a live television interview with a stage director that I had worked with on Rigoletto in Florida. We were asked, “How are you going to make this opera relevant? Are you going to update it?” She [the stage director] responded with “we will stage the opera in a way that Verdi would recognize and appreciate.” You see what’s being done to other pieces, and I don’t mind updating if it works.

What are some of the greatest challenges the cast and orchestra are faced with in Le nozze di Figaro?

For the cast, it various from character to character. The role of Susanna is actually the longest operatic role — longest in terms of how long she is actually singing on stage, which is about two hours and maybe more. Because of this, endurance is something she has to think about. The role of the Countess has two arias that are pretty fiendishly difficult, in terms of lengths of phrases and tone production. Count Almaviva has a difficult aria with challenging coloratura, and a high F# out of the blue at the end, which is especially challenging after he’s been singing with the ensemble all night. He exposes two octaves of his range. Figaro has three arias, two of which are quite difficult.

The recitative is difficult for the entire cast. I am very proud of the progress the cast has made with the Italian. It is getting very, very good. They’ve taken it very seriously. It’s an hour of recitative and that’s cutting out a considerable amount that’s not required to tell the story. The students that are cast in major roles tend to be seniors or graduate students, and they haven’t taken Italian in four years. I think that may be the hardest aspect for the singers.

Figaro is such a joy to play for everyone in the orchestra. We’ve had some great rehearsals and they’re really enjoying it, but some parts are quite difficult. When Mozart gets excited and wants to finish a finale with a presto, it really moves. He often writes difficult music, but never impossible music, which is the rewarding part of it. All of the principal wind players have gratifying solos. I try to involve the orchestra as active participants in the drama, so I try to make sure that they know what’s happening during all of the parts that they are playing. 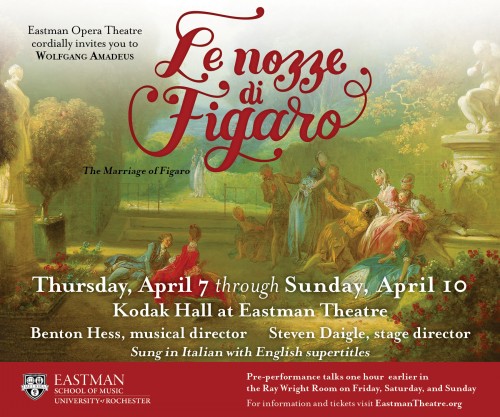