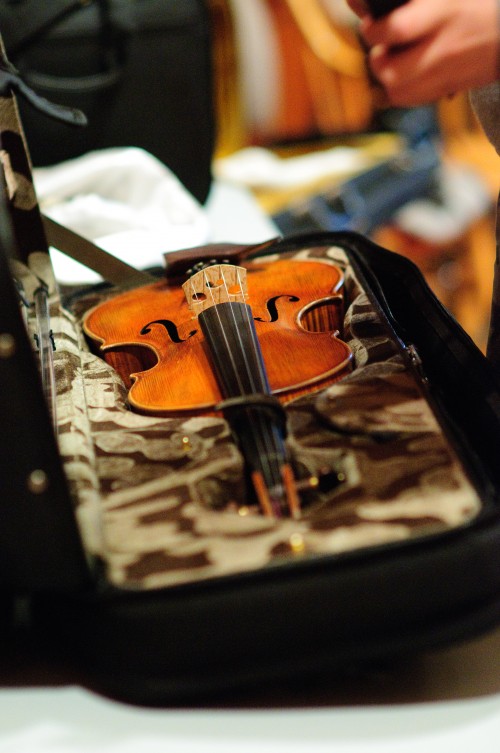 Collaboration is one of the greatest gifts of playing music. Eastman’s viola and composition studios have teamed up because of it. Recently the two studios performed a collaborative concert in which composition majors wrote pieces for their peers in the viola department, as a follow-up to a similar successful concert in spring 2015. I interviewed a few of these students to find out about their pieces, and how collaboration has made them better musicians.

What was special about this collaboration?

Joshua Wareham (viola): I think that having the opportunity to collaborate with our peers is an extremely valuable experience as a student, because it gives you a taste of one of the most exciting and fulfilling kinds of projects that we can take on as musicians; writing and performing new music. I think that this collaboration in particular is fantastic because of all the different sources of input that go into the new pieces. The performers and composers get to meet with each other to discuss ideas for the new music, and we are able to receive feedback from the composition and performance faculty, as well as from our peers, by working on and performing the piece in our lessons, studio classes, and in the final recital. There is so much to learn from everyone involved!

Diana Rosenblum (composition): My favorite part of this collaboration was having the opportunity to be coached by Professor Carol Rodland on my piece. She is so perceptive and astute, able to articulate her musical thoughts into cogent language. She instantly apprehended the meaning and expressive intent of my music and was able to raise the level of performance to a higher degree through her apt commentary and performativity. As a composer, I am often in the position of coaching my own work. Of course, in my own head, I have an “ideal” portrait of the music I have written, but it can be hard to convey to performers, who must negotiate technical as well as musical issues. Professor Rodland’s years of experience as both a skilled pedagogue and a chamber musician of the highest caliber enabled her to direct our rehearsal efficiently and productively. I consider her a great role model, for both performers AND composers.

Through Professor Rodland’s sponsorship and encouragement of this collaboration along with our own Professor Carlos Sanchez-Gutierrez and composition faculty, the reciprocity of the composer-performer relationship is foregrounded. This experience was a mutually beneficial one, for all parties.

Samuel Edwards (viola): What made this collaboration special for me is that it was the first piece I’ve ever done that sounds like “new” music. I am close friends with a composer back in Detroit and have aided in the premiere of many of his pieces, but he writes in a late Romantic style, something very unlike what Reilly Spitzfaden did.

What was the piece you played? How does its style relate to traditional viola rep?

Diana Rosenblum: My piece is a Trio for flute, viola and harp ossia piano. I was inspired to compose a piece in which disjunct melodies come to sound lyrical and smooth over time, substituting leaps of sevenths and ninths for seconds that might otherwise comprise scalar motions. The harmonic language of the piece likewise contains a preponderance of sevenths and ninths, so that the both horizontal and vertical dimensions of the piece are unified within this intervallic constraint. Despite jagged contours and a potential for dissonance intrinsic to my chosen pitch content, my Trio is consonant and ultimately tonal.

As a composer, I am interested in an audience’s perceptual process of acclimation that results from their immersion in a given sound-world. By saturating my piece with sevenths and ninths, I have created an environment in which these intervals overcome their usual connotations and come to be heard as consonances.

Joshua Wareham: The piece I performed is called Creative Process by composer Nick Morandi. The piece is for solo viola. In planning the piece Nick and I met to talk about what kind of musical ideas we are often drawn to, and how different pieces in the existing viola repertoire explore the capabilities of both the instrument and of composition. For this piece, we wanted to create something that had a tangible narrative or flow, with recurring ideas that the listener could latch onto and follow. Nick ended up deciding on a piece that emulates the creative process that all artists (in this case composers) go through when creating new works. The piece draws on a variety of different influences, and asks the performer to execute many different musical ideas and gestures. To me, the piece reminded me of solo viola pieces by composers such as Kurtág, Penderecki, Ligeti, and Hindemith, who have all written incredible music that brings out the warm, beautiful, singing qualities of the instrument, as well as its smoky, earthier timbres.

Samuel Edwards: I performed Woman in a Meeting for viola and alto saxophone by Reilly Spitzfaden with saxophonist Myles Boothroyd. Woman in a Meeting is very similar to traditional viola rep in some aspects and very different in others. As far as similarities go, it is post-tonal and uses the colors of the instrument to great effect. Also, it is a stand-alone concert piece or showpiece, which is becoming more popular nowadays. As far as differences go, Woman in a Meeting has a bizarre instrumentation (viola and alto sax), which leads to difficulties in blending tone colors. The viola also has two prescribed roles in the entire piece: background noise and a woman; nothing else. Violists have this wonderful opportunity to be able to perform so many different roles in varying contexts, so being prescribed to only two was also a shift.

Do you think there should be more collaboration between performance studios and the composition department?

Diana Rosenblum: YES, Absolutely. Other performance studios should be involved in direct collaboration with the composition studio. Unfortunately, misconceptions about “new music” abound, and only a self-selected handful of performers dedicate themselves to its performance as a “specialty.” Understandably, Eastman performers are already inundated with repertoire to learn and perform and may feel that an extracurricular engagement with composers could detract from their other studies and performance obligations. However, much of the music being composed today is every bit as vital, expressive, intellectually compelling, and even “accessible” as music of prior generations. I have been consistently impressed with the output of the Eastman composers at every level of study (undergraduate, master’s and doctoral), as I have been with the quality of performance here.

Joshua Wareham: I think this kind of work between the performance and composition departments is essential. In my opinion it is one of our greatest responsibilities as musicians to continue the art music tradition by writing and performing new works, and being able to work with your peers to premiere new repertoire is extremely rewarding and enjoyable!

Was this the first collaborative concert you’ve done?

Diana Rosenblum: This was my first time collaborating with Joshua Lohner, a first-year MM in Viola Performance. I was so lucky to be paired with a performer who is not only a gifted player with a beautiful tone, but a genuinely kind-hearted and hard-working individual who invested his time, energy and good will in my music.

Joshua Wareham: I’ve worked on premieres of new works composed by my peers before; primarily chamber music, but this was my first time being able to work one-on-one with a composer on a viola piece. I was also great to have the opportunity to perform it for our teachers and the Eastman community. It was definitely something new for me, but something that I had wanted to be able to do for a long time, and I hope to have many more chances like this in the future!

Samuel Edwards: As I mentioned earlier, I am close friends with a composer back home, so no, this is probably the fourth or fifth I have done.

What were rehearsals like? Did you work directly with each other to write pieces?

Diana Rosenblum: Josh and I met in the Fall to discuss our aesthetic tastes on a general level, but otherwise he left me free to compose to my own heart’s content. Thus, our collaboration began in earnest once the piece was complete and he began to interpret it, along with the other skilled musicians of our ensemble, Zachary Osinski (Flute, BM 2017) and Dr. Tze-Wen Julia Lin (Piano, MM & DMA UOregon 2012). Thanks to their expertise and willingness to spend several extracurricular hours rehearsing, my challenging music came together in a short amount of time. The four of us had a wonderful social dynamic that made the rehearsal process that much more enjoyable!

Joshua Wareham: Working with Nick was really fantastic, he has a great ear and vision for what he wants in his music, but he is also flexible and willing to work together to make music that works equally well for the performer. Nick and I met a few times before he began writing to discuss our preliminary ideas, and as he worked through the initial drafts of the piece we met several more times to work out which ideas work well instrument, and which needed to be tweaked in some way or another to be as effective as possible. Nick did a wonderful job of writing very thoughtful, engaging, and exciting music. The end result was a piece that I think we both felt really confident in and proud of!

Samuel Edwards: The rehearsals were a lot of fun, especially when Woman in a Meeting had time to be in our brain’s and fingers for some time. The conceptualization of the whole piece was my favorite aspect of it. I did not have a chance to work with Reilly directly while he was writing the piece, but there were spots in rehearsals where I was able to give him feedback about certain gestures and their relative difficulty in executing them. He gave Myles and I a complete piece at the first rehearsal, so we only changed minute details.

Whether it be through the challenge of performing a work that has never been heard before, the advancement of our chosen medium, or the possibility of a life-long friendship with another person who respects music as much as you, collaboration is essential. Indeed it is alive and well at the Eastman School. I invite all to join in! 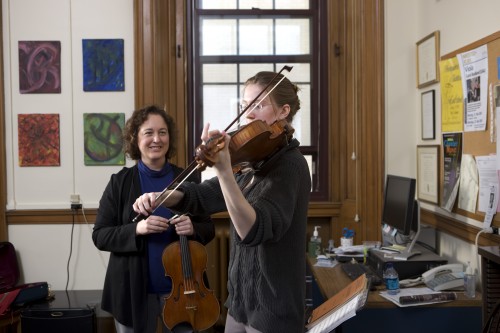 Eastman faculty Carol Rodland teaches viola to a student in her studio. April 2010.