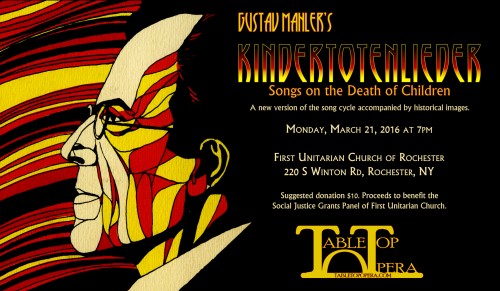 Table Top Opera, a chamber ensemble of Eastman faculty members, students, alumni, and friends, will be performing its multi-media adaptation of Gustav Mahler’s Kindertotenlieder (Songs on the Death of Children) on two occasions this week:

Tuesday, March 22 – Interfaith Chapel at the University of Rochester (500 Wilson Blvd., Rochester)
Free and open to the public.

Directed by Matthew Brown and Christopher Winders, Table Top Opera specializes in multi-media projects with live images, and in collaborating with other artists and institutions.

Based on poems by Friedrich Rückert, Mahler’s song cycle Kindertotenlieder (1901-1904) underscores the frighteningly high infant mortality rates during the early 20th century. They have fallen dramatically over the past century but are still high in Rochester. To highlight this and child poverty rates, Table Top Opera presents a new version of Kindertotenlieder, accompanied by historical photographs and pictures of children who have succumbed to lack of proper care in Rochester today.

Last week, Brown was interviewed by WXXI’s Matthew Dawson about the upcoming shows. The link to the interview can be found here.

Other recent projects by Table Top Opera include: Debussy’s Pelléas et Mélisande (2012) and Strauss’s Salomé (2014) with pictures by comic book artist P. Craig Russell, and Echoes of ’64 (2016) with music by J.S. Bach and Duke Ellington and photos by Paolo Pellegrin. For more about the ensemble, its personnel, and details of earlier shows and forthcoming events, visit www.tabletopopera.com.